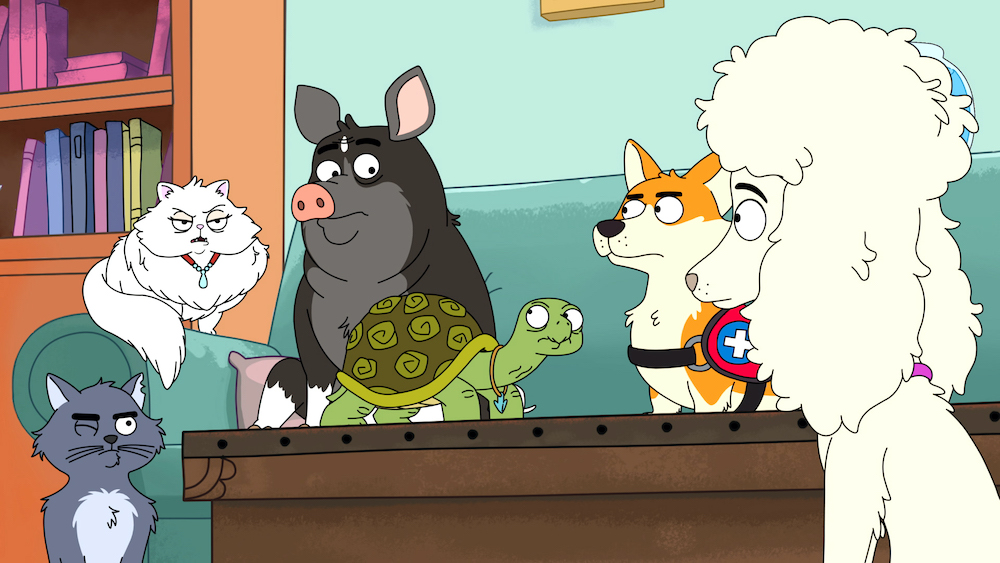 There aren’t too many surefire ideas out there these days, though “what if ‘The Secret Life of Pets’ didn’t have to be G-rated?” is about as straight down the middle a pitch as it gets. Still, “HouseBroken” finds a few ways to make itself stand out, especially with the help of several solid voiceover performances from actors who know how to make any character a standout. (And no, the pets aren’t the old characters who get to speak; Maria Bamford guest stars as a harried owner, though not long enough to make as much of an impression as Bamford’s elastic voice is capable of creating.)

“HouseBroken,” Fox’s new animated comedy from Gabrielle Allan and Jennifer Crittenden (“Veep”), follows a group of misfit pets led in weekly therapy sessions by Honey (Lisa Kudrow), a perfectionist poodle who wants to solve everyone else’s problems as well as her own. Animated by Bento Box Entertainment (“Bob’s Burgers”), the show doesn’t need to stray too far from the usual animal tropes to find decent humor in them. There’s Tabitha (executive producer Sharon Horgan), a snobby Persian cat, and “The Gray One” (Jason Mantzoukas), a scrappy tomcat used to fighting for space and attention in a home packed to the brim with other anonymous pets. Honey’s adopted brother Chief (Nat Faxon) is a classically dumb dog who trusts everything and everyone, even when it’s a skunk that sprays him in the face every single time they meet. Fat cat Chico (Sam Richardson) is obsessed with his absentee owner, while Shel (Will Forte) is an aged turtle with the well-founded fear that he’s the only turtle around for miles. All the above act about the way you’d expect, but these actors are sharp enough to make the characterizations more three-dimensional than first meets the eye.

Honey’s group also includes a few less immediately cliché pets who, at least in the first two episodes screened for critics, don’t get quite enough airtime to make an impression but have potential to down the line. Corgi Elsa (executive producer Clea DuVall) is a service dog in training, a fact she never lets anyone else forget in as many self-righteous asides as she can squeeze into casual conversation. Hamster Nibbles (Bresha Webb) simmers with a rage much bigger than her tiny body, while goldfish Bubbles (Greta Lee) can’t do much but roll her eyes at the group from within the confines of her fishbowl. And don’t get potbelly pig Max (also Hale) started on who his celebrity owner might be. (It’s George Clooney, heard of him?!)

In the first two episodes, there’s barely enough time to get through all the facts of the cast, but a couple smart stories keep the show aloft. But maybe the best (or at least quickest) way I can describe the vibe of “HouseBroken” is that it’s a show that includes both Honey’s quiet grief at losing her best friend and Honey imagining herself seducing a wild coyote in bondage gear to the tune of Cardi B’s (radio friendly-ish) “WAP.” The show’s got some layers, but it also knows its lane.