Trippin’ with the Kandasamys 2021 Movie Review
Skip to content 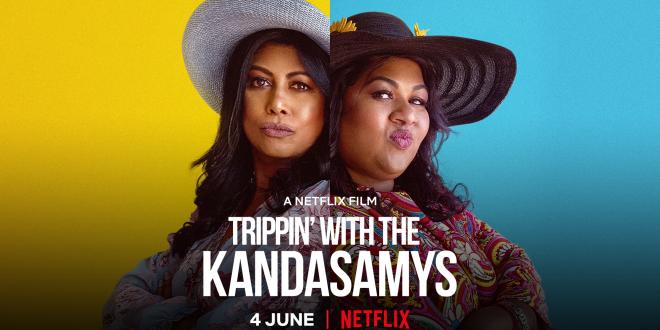 Trippin’ with the Kandasamys 2021 Movie Review

What I love about The Kandasamys movie series is how spot on the narrative is to the South African Indian community. Without being condescending as some slapstick comedy can be, it holds an accurate, spit and polished mirror on the community.

In this latest instalment of the movie series by esteemed director, Jayan Moodley, the now familiar Kandasamy-Naidoo family story evolves and grows with hilarity, but also raises topical societal issues. Like, why do women always have to make the tea, and why are married Indian men so faulty, really?

It is a feast of local talent. Starring Jailoshini Naidoo and Maeshini Naicker as best friends Jennifer and Shanthi, along with their respective husbands, Elvis and Preggie played by Koobeshen Naidoo and Yugan Naidoo. The handsome Madhushan Singh plays Prishen Naidoo. His on-screen wife, sizzling Jodi Naidoo (nee Kandasamy), is played by Mishqah Parthiepal.

But everyone’s favourite (again) is Jennifer’s mother-in-law, Aya (grandmother), played by Mariam Bassa. As that generation might say, “she’s too hot”. For the younger generation, #dead at her comebacks.

Newcomer Uraysha Ramracheya is also perfectly cast as a honeypot, exactly the type of young women the older generation would gossip about.

Cinematography is tops, with the beautiful KwaZulu-Natal north coast playing a nostalgic role. There is drama, one-liners and familiar family scenarios that are wonderfully directed by Moodley. A world-class quality production, it is no wonder the movie was snapped up by global streaming platform, Netflix.

As for the storyline, the young couple’s (Singh and Parthiepal’s) relationship tied the families together in the two previous movies. We’ve seen the leading ladies at war over their children dating, then reconcile, then hilarious wedding-drama in the sequel. This next KUWTK movie focuses on the best friends and their marriages, plus the new marriage of the children. A fun-filled family holiday to celebrate Shanthi’s 50th birthday takes an unexpected turn and fuels a mid-life crisis.

Trust me, you’ll love it. Get your masala chai and vermicelli ready and enjoy the family night in.

Trippin’ with the Kandasamys 2021 Movie Review