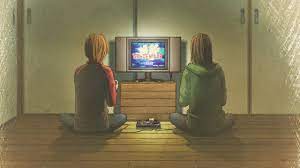 The manga market is filled with stories of people being transported to another world, but what about if they return to Japan after having spent significant time in another world? Well, that’s what Uncle from Another World is here to tell us about!

The story follows Takafumi, whose uncle has been in a coma for 17 years. Suddenly his uncle wakes up and reveals that all the time he was in a coma in Japan, he was actually adventuring in a fantasy world! To begin with, Takafumi assumes his uncle is just confused but to clear up any misunderstandings, his uncle shows off some magic!

Since Takafumi has been working part-time jobs to make ends meet, he quickly realises that he could use his uncle’s abilities to make cool YouTube videos and earn enough money to live a more comfortable life. But first, he needs to get his uncle up-to-date on everything he’s missed over the years – including the explosion of the internet, smartphones, and video games.

Uncle from Another World is a comedy series that knows its audience well. While there is plenty of otaku cultural humour through Takafumi sharing popular Japanese media with his uncle, there is also plenty of tried and tested isekai humour as the uncle shares his experiences from the other world. Helpfully, he can create a screen in midair to relive and share some select moments with Takafumi, who is increasingly amazed by the amount of cool stuff that happened.

Admittedly, I have mixed feelings about this one. I like the base premise, but quite a few of the jokes aren’t funny and I’m not sure they mix well with the art style. This manga has been created by Hotondoshindeiru and it’s their first published work in English. Their art style is quite realistic and I don’t find the cast all that pleasing to look at.

There is certainly value in giving us characters that don’t look like the pretty boys and girls we normally find in the genre and the panels are nicely detailed. Scenes depicting the fantasy world match up to what you’d expect to see, so it’s mostly the Japan sections that throw me off. Of course, this doesn’t mean the artwork is bad by any means, it just doesn’t appeal to me as much as I hoped it would.

The bigger issue overall is that if you don’t like video games or the isekai genre then some of the jokes will fall flat and that will make or break the book for you. There is a fairly length page of translation notes at the back of the book to help with the gags, but these won’t help you while you’re reading the scene (although I appreciate their presence all the same). It’s certainly worth a look if you like the sound of the premise, but I’d go in with lowered expectations.

Maybe none of this is helped by the fact Takafumi and his uncle aren’t that interesting as characters. The uncle doesn’t have a lot of personality outside of his gags and while Takafumi serves better in this regard, there still isn’t that much depth on offer.

Uncle from Another World Volume 1 comes to the West thanks to Yen Press and has been translated by Christina Rose. The translation reads well and as previously mentioned there are many translation notes to help explain some of the references, which is appreciated! The series is ongoing in Japan at six volumes and Yen have Volume 2 of the series scheduled for release in August.

Overall, Uncle from Another World offers something new in the crowded isekai genre but it’s certainly not going to be for everyone. How much you enjoy it will vary, based on your opinions on the art style and humour, but provided you can get on with that you’ll have a fun time with it.