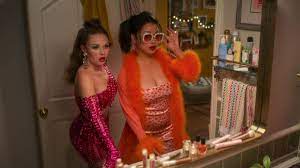 It should only take a few minutes for someone to know whether “Boo, Bitch” is for them or not. Netflix’s latest young adult series is unabashed in announcing itself, with high schoolers speaking in impossibly long hashtags and acronyms, and dialogue that plays out as if written in ALL CAPS. For those tuning in to see what star Lana Condor is up to after playing Lara Jean in the “To All the Boys I’ve Loved Before” trilogy, the show’s hyperactive tone at least gives her the chance to play someone rather different. Condor’s latest high school character, Erika Vu of “Boo, Bitch,” ends up a far more concentrated version of Lara Jean in ways that both point to Condor’s versatility as an actor and reveal the cracks in the show’s tricky premise.

From co-creators Erin Ehrlich (“Crazy Ex-Girlfriend”) and Lauren Iungerich (“Awkward”), “Boo, Bitch” stars Condor (also an executive producer) as a restless teen who spends most of her time trying to avoid the “epic fail” of going viral in a bad way. A month before prom, Erika and her best friend Gia (Zoe Colletti) vow to make the most of their remaining days of senior year — a pact that gets far more complicated when, hung over, they find what appears to be Erika’s body rotting in the woods. It’s dark stuff, but as directed by Iungerich, it’s rendered more like a Scooby Doo cliffhanger than some dire Riverdale twist. (Once you start thinking of “Boo, Bitch” as a live-action cartoon, it makes a whole lot more sense.)

The rest of the limited series’ eight episodes are dedicated to Erika trying to make the most of whatever time she has left as an apparent “embodied” ghost. Without spoiling anything too specific (even though this review is published the same day the show drops, at Netflix’s request): Erika’s “best life” mostly involves making out with her longtime crush Jake C. (Mason Versaw) and standing up to her rival Riley (Aparna Brielle). But the second she tastes a single scrap of popularity, Erika takes a sharp turn into the consequence-free life of an #influencer who rules the school with nihilistic glee.

It’s that last development — which morphs Erika’s wide-eyed Cady Heron into a Regina George monster practically overnight — that trips “Boo, Bitch” up. In the end, it only barely recovers with a more heartfelt ending. It’s not that Condor can’t handle the tonal shifts; in fact, her full-throated embrace of Erika’s selfish side is so jarringly different from the persona she carved out in “To All the Boys…” (though not dissimilar to her cutthroat character on Syfy’s short-lived “Deadly Class”) that it’s often perversely compelling. But as written, Erika’s transformation into a completely different version of herself is so sudden and so complete that there’s no justification for how awful she ends up being to anyone who cares about her. That’s especially true of Gia, who Colletti embodies as such a sincere, raw nerve that it’s a downright bummer to see the new Erika be so careless with her heart.

“Boo, Bitch” eventually finds its way to the light, wrapping its stories up with a bow that Erika herself would agree she probably doesn’t deserve. The show perhaps needed one more episode to keep its main character consistent enough to make more sense, same with Colletti’s Gia. Either way, there’s something missing from “Boo, Bitch” that keeps it from being quite as effective as it could be, despite its game stars’ best efforts to fill in the gaps.