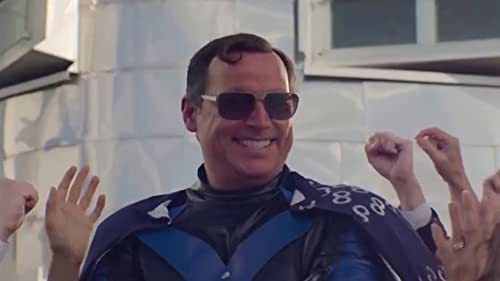 Felix Armand (Thomas Schubert) created the tech behind the up-and-coming payment processing company CableCash, and he’s about to make the most important presentation of his life: One that will convince potential investors that their upcoming IPO is worthwhile. He’s counting on this so that he can become co-CEO with the face of the company, Magnus Cramer (Matthias Brandt), which is why he crawls all over a plane during turbulence looking for the USB stick that has the presentation (he doesn’t trust the cloud at all).

During the speech, Felix helps Magnus deal with the reporter that keeps digging up the story, then Magnus goes off-book to leak the federal deal, with the finance minister in the audience, before a decision was even made. Also in the audience is Sheila Williams (Larissa Sirah Herden), who cons her way into the conference claiming that she has family money to invest. Felix has to find the Hermann’s elsewhere in the hotel and beg them not to come to the party with the minister. When one of their thugs puts a gun to his head, Felix tells him to shoot, saying that without a deal, he has nothing anyway.

Mangus’ adlibbing gets them the contract, and at the party to celebrate — which Sheila attends — Felix demands Magnus give him the papers to sign to make him Co-CEO. At Felix’s flat, a drunken Magnus tricks Felix into singing termination papers, which will kick in if he doesn’t agree to become the COO, still reporting to Magnus. All of this comes into play the next day, during the company’s successful IPO, when the Hermann’s end up giving Felix up to the police, due to his connections with the Sicilian Mafia.

It’s risky to name a show after a meme, but King Of Stonks is appropriate, considering what the show is about. The stonks meme basically indicates a lack of financial knowledge, and that seems to be in abundance at CableCash. Both Felix and Magnus have built this company on a house of cards, and it seems that Felix is going to take the brunt of the blame for that. But that’s what we like about King Of Stonks: It’s less about being a tech bro trying to fake it until he makes it and more about a techie who wants to get his due but will always have someone there to put him in his place.

That’s why we compared this show to Silicon Valley. Felix is earnest and constantly put-upon, always striving to reach the top of the tech heap; Magnus feels like an obnoxious empty suit who thinks that appearing in a superhero costume in his company’s hype video is a good idea, but he’s damn good at manipulating people. So it’ll be a constant battle between the two, and it feels like we’re going to root for Felix, despite his own douchey tendencies.

Felix is the lesser of two evils in this scenario, and when you get that choice, you tend to align with that less evil person. Either way, it’s a lot better than showing some arrogant prick of a tech mogul railing against journalists, government regulators and his/her own delusions. Felix is fixing to go down for CableCash’s associations with the Sicilian Mafia, but how many people will he take with him?

It also seems that there will be a cat-and-mouse, will-they-won’t-they element with Sheila, who likely has no money but a good capacity for lying. Is this additional piece of the puzzle necessary? We’re not sure; it really depends on what she’s there to do. Is it to siphon money from Felix and the company, or is it to expose him?