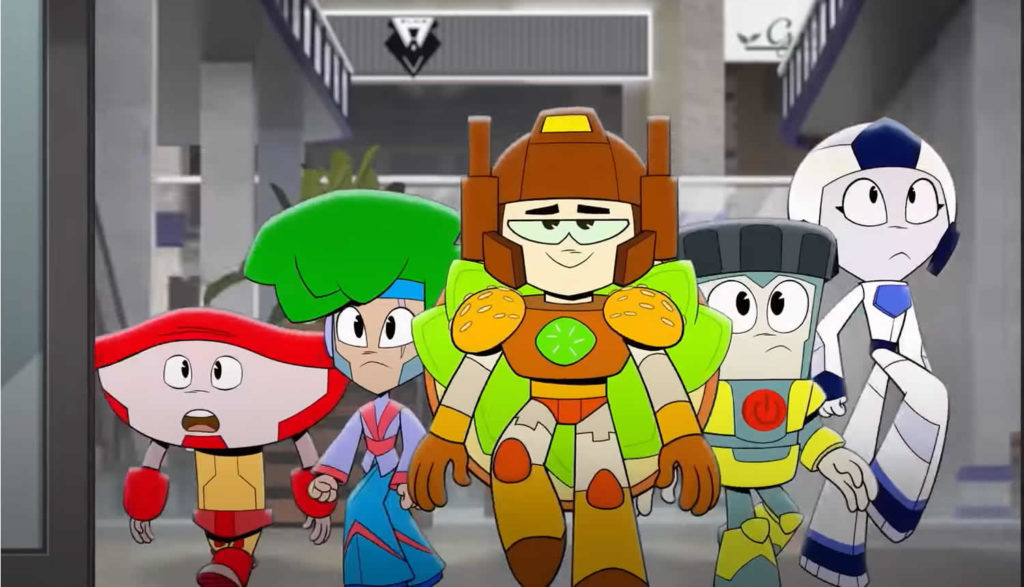 When Energon, the fuel on which Transformers run, strikes a city mall, it powered countless inanimate objects into miniature Transformers – BotBots. Now, when the lights of the mall turn off and all the customers goes home, each squad of BotBots transform from their inanimate counterparts to come out to play and party.

But one day, the burger-shaped leader of the Hunger Hubs squad (aptly named Burgertron), winds up in an abandoned part of the mall after sliding down a vent. He discovers the Lost Bots—Kikmee, Bonz-eye, Clogstopper and Dimlit—all of whom are completely unaware of the existence of the other BotBots.

So Burgertron decides to introduce the four to the rest of the BotBots. However, things quickly go south, and they’re forced to break the biggest rule in the BotBot book: do NOT let a “flesh being” see you!

Now, Burgertron is kicked out of the Hunger Hubs, and the rest of the BotBots treat he and the Lost Bots with displeasure and disdain. It’s up to them to try to work their way back into the good graces of the mall squads—however difficult that may prove to be.

Oh, and now they’ll have to watch out for Dave, the mall security guard who saw them, and who is trying to prove that they exist.

The episodes of Transformers: BotBots are each split into two 15-minute segments, each following Burgertron and the Lost Bots as they go on adventures, interact with other BotBots and, every so often, save the day. Ultimately, all of their actions are in pursuit of being reaccepted into general BotBot society once again.

But with every journey, experience and life-threatening moment, Burgertron and the Lost Bots bond with one another, and they begin to wonder whether they should split up in favor of joining squads that previously rejected them. Through their time together, the Lost Bots build deep, unconditional friendships with one another, and they become less and less keen to give that up.

The Hunger Hub squad BotBots are made up of sentient French fries, orange juice, broccoli, a ketchup bottle and a slice of bread, but Burgertron finds that he doesn’t really fit in there anymore. Instead, he finds that he has more in common with the Lost Bots—made up of a sentient flashlight, soccer ball, Bonsai tree and a plunger. Though these items don’t fit into a definitive category, they mesh in ways that the uniform groups don’t do. And that’s a good lesson for a kid to learn—that he or she doesn’t have to look, think or be the same as another to be able to be friends with them. And on the flipside, just because they may look, think or be the same as another doesn’t mean that there’s something wrong with them if they don’t fit in.

Transformers: BotBots content concerns primarily center around slapstick violence and toilet humor, the latter of which is often spouted by BotBot plunger Clogstopper. One BotBot is sentient vomit, and another is sentient fecal matter. In addition, the occasional rude name is spoken about another bot, such as “loser,” “nerd” and “dweeb.”