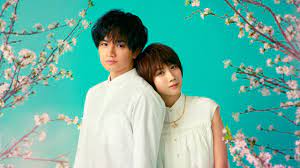 Haruto (played by Kento Nakajima), a young man who dreams of becoming a photographer. and believes that he has talent but then he gave up on working in this profession until he stopped. He meets Misaki (played by Honoka Matsumoto), a rookie barber who gets Haruto as his first customer. And he immediately fell in love with her, becoming a regular customer who secretly loved her in his heart. But the day he mustered up the courage to ask her out on a date. It turns out that Misaki accidentally cut off his earlobe. And that’s the beginning of their bond with a sad destination.

This is a movie based on the novel “Sakura no Yona Boku no Koibito” by writer Keisuke Uyama. It was first released on February 17, 2017 by Shueisha Publishing House and it was so popular that it had 6 sales. Hundred thousand copies as a guarantee Then it was brought to be produced by the Netflix capital, directed by Yoshihiro Fukagawa, whose work is famous for Sagrada Reset (Fantastic City). time changer) is a love drama movie with a story about special powers. Coming in this story is still a love drama that although the story may not have anything special. But still trying to have a plot that turns the story to look more special than a typical love drama movie. Which the story is divided into the first half and the second half that are called different genres between pure love with a tragic tragedy which is almost a success formula of the Japanese who work hard to make it out often.

This movie is 2 hours 9 minutes long. In the first 40 minutes, the story will be a pure love story mixed with funny jokes with the beginning of the story that is a bit strange when the heroine cuts off the heroine’s earlobe. Then it had to become a deep relationship from that accident. In which the protagonist who had his earlobe cut off, he felt lucky that he was able to get close to dating her. The plot is fun to see the awkward people. two cute people meet Because the protagonist himself is lost in life after leaving his job in a photo studio where he dreams of becoming a photographer. became a common worker living day to day The heroine is a hairdresser. Good-humoured personality that really took off. Whoever sees it will love it. It’s not surprising that the heroine immediately fell in love with her on the first day they met. The movie makes us enjoy talking. The couple’s dating story is cute and a little funny, and it also helped to bring back the fire of living the hero’s dream life. Both actors played their roles in such a way that they were so cute and charming. Feels like they’re the first love of the couple as well It’s a fun and happy time. until I sneaked into the story a lot Before the story accidentally turned the mood immediately after the first 40 minutes of the story.

The movie intends to cut off the first emotion immediately when the heroine suddenly was sick and deteriorated which the story in the beginning has a little hint The story of the heroine’s gray hair that is more than usual. But the role for the heroine to become “Premature disease” which actually shows more severe continuation symptoms than in the story, i.e. seen in childhood, but in this case, we are re-adjusted into fast forward syndrome that accelerates to premature aging in less than a year. (Here, as far as the information is searched, I can’t find it to be true). The story uses the heroine’s acceleration here to connect with the spring season when the hero invites her to see Sakura in later years. from the first date in memory but the following year, she won’t be with her again as the title suggests. and then turn the story into an extremely sad line. The kind that from when we saw a cute heroine in the beginning, later we hardly ever see her again. Even in its aging form, very little is seen. Because from now on, most of the story she will wear a hood to cover her head and clothes to cover her whole body, even withered hands.

I still can’t see it at all. They also try to use the camera angle to cover the heroine constantly, which understands that the director wants to convey to the character who has this disease that he does not want to meet or let anyone see his body anymore. And the other reason is that it intends for the audience to feel the impact of the shocking seeing the heroine at the end as well. This caused her role to be immediately cut off from the hero without lying and not telling him the truth that she was sick. until he almost became a madman The dream of being a photographer is well on its way. It almost collapsed, running out of power to work down. Including the heroine’s family that has a brother and sister-in-law who are getting married, they have to suffer trying to heal their sister. until it became more and more dissension in her family.

The second half played with the heavy frustration that was put in continuously for a long time until the end of the story. Like the director is very confident that they have to take this amount in order to force the audience to be shocked by the suffering of both the heroine and the heroine. It may be effective for people who are sensitive to these things easily. But for the audience who is not sensitive or bored with this monotonous plot. It turned out that the story dragged on for more than an hour to try and shock the audience. And then there’s a light ending at the end. Just enough to feel that it’s not too dark, that’s all. But it wasn’t enough to make me feel better. Became the mood to watch the latter part, quite boring, wrong with the first part until it was very disappointing.

Sad love movie based on Japanese formula. The first half is clear and cute. The second half is broken. Liver is broken. cute heroine There is a plot that turns the story to be very sad and heartbreaking. which if people still like this style, they can watch Because the story was intended to drag on for a long time to crush each other’s emotions. But if not very sensitive Or if you are bored with this Japanese formula, you can skip it.