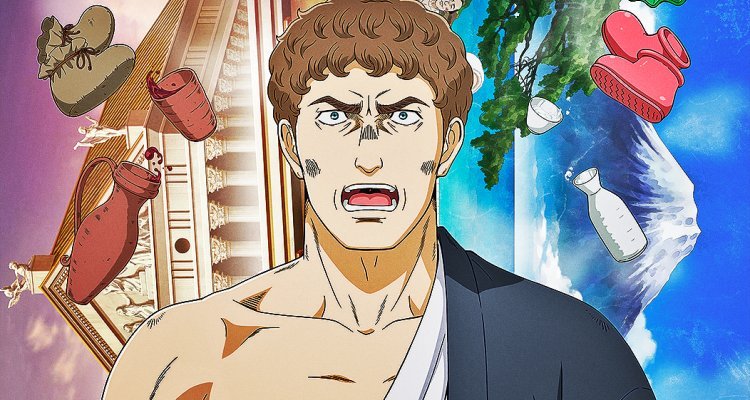 March 28th sees the release of one of the more genuinely eccentric Netflix series in recent memory–Thermae Romae Novae. The anime series is the third screen adaptation of the popular Thermae Romae manga series. Literally just “Roman Bathhouse” in Latin, Thermae Romae follows Lucius, a bathhouse engineer under the reign of Emperor Hadrian, as he struggles to come up with innovative ideas to be competitive in a difficult bathhouse market. Lucius gains inspiration through bizarre incidents where he sinks deep underwater only to inexplicably reappear in modern-day Japan, where he discovers novelties that he can apply to whatever social and practical bathouse issue he was thinking about when he fell under.

Lucius is a fascinating character because he is a middle-aged fantasy. Most time travel stories feel the need to impose extremely high stakes like the destruction of the space-time continuum or some such nonsense. But all Lucius really cares about is his career and also bathhouses in general, for which he is also very passionate. Lucius is also (by his own personal standards) a noble Roman citizen with a strong and at times arbitrary sense of personal honor that his fellow Romans often don’t demonstrate. Lucius has strong faith in the wisdom of Emperor Hadrian which mostly doesn’t waver throughout the series, as he sublimates his desire to make the best possible bathhouses into a quest to glorify Rome.

The humor and appeal of Thermae Romae Novae lies in its comically specific subject matter. Despite this, Thermae Romae Novae takes longer than you’d think to really get moving. The first episode is a mostly pointless prequel story featuring Lucius as a young child, making his first foray to Japan and not actually learning anything because he’s not a bathhouse engineer yet. There’s a lot of padding in these early episodes, to the point of five minute mini-documentaries featuring Thermae Romae author Mari Yamazaki closing the end of each episode. I’m not entirely sure why Netflix thought these episodes had to run so long when the plots are so self-contained and simple and ultimately does so little with the worldbuilding.

Thermae Romae (and Thermae Romae Novae for that matter) is a really strong concept in part because it’s so focused on Lucius’ extremely narrow interests. It contradicts early hints that Lucius might just be experiencing weirdly vivid dreams are explicitly contradicted when we learn that he can take back some small items with him–which is important, since Lucius wants to reproduce these various knick-knacks or even foods as much as possible. Though it’s entirely predictable that Lucius will travel to the future every episode the exact means by which he does so is delightfully incomprehensible. By the latter, better half of Thermae Romae Novae we see Lucius musing that his travels to modern-day Japan are some means of providence by the Gods, and, for a guy like Lucius, that’s all the explanation he really needs.

But the revelation is still a disconcerting one. As a semi-insecure middle-aged man, Lucius doubts at times whether he deserves his fame as a celebrated bathhouse engineer since he’s just copying other people’s ideas. Yet Lucius remains a sympathetic and even admirable character because we see that he has a clear deductive mind and a genuine curiosity about how foreigners live, despite his often nationalist attitude about Roman superiority.

Thermae Romae is fascinating not just as a treatise about bathhouse engineering, but also about how to be a good tourist, with Mari Yamazaki herself providing increasingly convincing arguments for why Japanese bathhouse tours are a great time. Despite constantly reappearing in modern-day Japan completely nude, and not knowing a single word of Japanese, Lucius is surprisingly non-threatening to the various people he meets. Lucius unknowingly benefits from white privilege, yet conducts himself with a sense of polite honor because his enthusiasm for new experiences and learning customs transcends his jingoistic cultural ideals.

On that note, I should emphasize that you really want to watch Thermae Romae Novae with Japanese audio and not the English dub. Kenjiro Tsuda completely nails the oxymoron of aloof noble modesty that makes Lucius work. David Wald in the English version of the role is far too superior, transforming Lucius from a guy who’s kind of standoffish to one who’s fairly explicitly a jerk. The overly emotive nature of the rest of the English dub’s voice cast has the same problem, making the story too much about the characters and not enough about the ludicrous framing device of using time travel to improve the bathhouse experience of ancient Rome. Don’t forget that English and English (CC) are completely different subtitle settings on Netflix either, the latter giving you the script for the dub and not the more literal minded translation of the Japanese script.