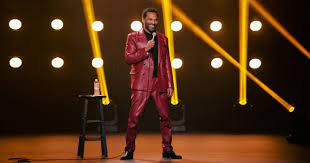 Mike Epps is heading back to the stage for his second stand-up special for Netflix, the first since 2019 with Mike Epps: Indiana Mike. Epps is one of the better stand-up comedians and I was excited to hear what jokes he has come up with since the last time we saw him on the stage.

Epps starts the special by tackling the one thing all stand-ups like to attack first, COVID. He joked about being worried about the shot until Netflix began talking about taking his stuff off Netflix. Then, Epps does something here that few comedians have gotten right so far, taking on COVID and not trying to make a point. First, he makes light of getting it, and next, he tackles how to get other black people to take the shot and moves on. It was a brilliant opening.

One of the things about Epps with his stand-up is he doesn’t have the same beat with jokes that other comedians do. Sometimes, his delivery could be seen as a bit sloppy, but he makes it work because of his ability to utilize hands and body to add to the jokes. Another thing you notice is that he doesn’t care if his jokes always land with the crowd or not because I am not sure anyone finds Epps funnier than Epps himself.

The biggest issue I’ve always had with Epps’ stand-up specials is that he is about 60% on his jokes. He has some strong material and when the jokes land, they are GOOD, but there are times where you find yourself meandering a little bit because he wanders a little. You will notice when watching this that the highs are high, but the lows are low.

The Guardians of the Galaxy Holiday Special 2022 Movie Review