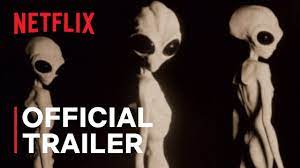 Does a better job at debunking than the US government. So there is more produced footage than real footage in this… If it had 21.5% real footage in it I would have rated it much higher. But it is much closer to 3% (reference to a claim made in the first episode)

It is a real shame since I saw something I cant explain in the 1990’s. And so far all disclosure and documentaries… instead of reinforcing the idea that I really saw something makes me think I am crazy….

there are a lot of claims made that make me question stuff… and if they do So there is a claim even so far back in biblical times….. well what they show is a fresco that is quite unique but made in 1350 not when Christ was running around… And while they are art experts that claim it is a symbol for something much more logical it is true that you sort of can see a ufo in this.

The TL4560 or whatever on the side of a craft… well we on earth have the habit on putting letters and numbers on crafts… Knowing there are so many alphabets on earth and that you probably could write numbers using a different toolset. (Just look at Kanji) to me that is one of the examples that is very unlikely.

So what they really need to make is a netflix show that explains why all the UFO related documentaries about the truth come across like a very badly written X-file episode… Just kidding… What they really need to do is make an open documentary about it. Not biased to one side or the other…. since this is so heavily biased towards the existence…. It stops questioning itself…. and adding a lot of footage that is fabricated is not helping at all.

There is one more… the creature talked telepathicly and spoke very well English…. It could speak all other languages as well… I am not a native speaker of English but somehow that sentence doesn’t sound right to me.. perhaps “he spoke English very well.”

Well how would he know? He could speak all other languages ?? Let me know how he knows that…. And go in detail on that… Because if you can convince me on that well I sort of have to believe… Is there a transcript of the conversation they had… Instead because this is so poorly made and because all the gaps that the makers leave… It does a better job at debunking than the USA government did.