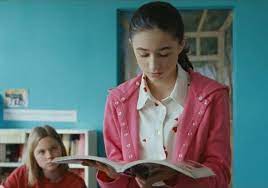 “What am I doing in this world?” wrote Paul Verlaine in his classic poem “The Song of Gaspard Hauser,” the Symbolist French poet most closely aligned with the fin de siecle, importantly the concept of one era’s segue into another. The poem and the motif represent several subtle subtexts in Petite Solange, the fourth film by writer- director Axelle Ropert, perhaps best known as the scribe for Serge Bozon (La France, Tip Top, Madame Hyde).

A melancholic coming-of-age story of an adolescent girl’s grappling with her parents’ impending divorce, it’s a quietly conceived composite of bittersweet epiphanies regarding oft-disappointing reality of the world and our loved ones. Contained in the emotional tumultuousness of its lead character, Ropert returns to her prized material of placid surfaces broken by desires and resentments held at bay by the autonomous suppression demanded by day-to-day rhythms.

Solange Maserati (Jade Springer) is a curious, sensitive 13-year-old girl whose world is defined and contained within the comfortable bosom of her parents, Aurelia (Lea Drucker) and Antoine (Philippe Katerine). Her bookish older brother Romain (Gregoire Montana) is poised to go to Madrid for school, while an upcoming class trip to Italy, which is where Antoine is from, suggests a happy, easygoing future on the horizon. But increasingly, her parents have been arguing vehemently, with dad moving to the couch. A musical instrument merchant, Antoine turns his attention to his business while Aurelia, a stage actress, drowns herself in the craft. As it becomes clear her parents have irreconcilable differences driving their family into dissolution, Solange’s emotional responses cause trouble at school as she acts out in resistance to a fluctuating situation in which she’s kept in the dark.

Ropert chooses to open her film with Solange’s existential breaking point, paralyzed before the recitation of Verlaine in front of her class. Enigmatically, the narrative backs up “a few months earlier,” to the celebration of her parents’ twentieth wedding anniversary. Her father (a rather hapless Philippe Katerine, whose screen presence is like that of a humorless Francois Damiens, who appeared in Ropert’s earlier The Wolberg Family) gives an awkward speech the content of which details their amused conception of their two children.

Solange is equally oblivious to the growing rift between her parents, though her closeness with her father is compromised with his increased affection for an employee. Lea Drucker, who recently starred in the more aggressively calculated portrait of familial dissolution as an abused spouse in 2017’s Custody, is more prone to using Solange to glean information about Antoine’s new love interest, embalming herself in her work as a stage actress.

As per usual, school officials are coldly unaware of Solange’s sudden distraction and minor episodes of acting out. A more expressive act of rage exhibits itself in a shoplifting episode, where Solange is caught stealing a ridiculously oversized brassiere. Somehow, the shopkeeper ends up being the film’s most empathetic persona.

Jade Springer deftly navigates these episodes as Solange, who moves from being a passive participant in her own life to obtaining a semblance of agency over a reality she cannot control. Ropert’s screenplay provides the audience with foreboding suggestions Solange has no way of interpreting in the same way. This is nowhere more beautifully rendered than in a Science teacher’s lecture on the speed of light. As an analogy, if the sun were to die, some time would pass before we’d be aware of it, only realizing too late after its last rays arrived. It’s the same equation for Solange’s parents, who like the sun, are the center of her universe, and we meet her just as their last vestiges of stability have evaporated.

In the strident tradition of carefully hewn French character studies, Petite Solange is a clear-eyed, mature portrait of a young woman’s ascent into the world of melancholy, less oddly calibrated than Ropert’s The Wolberg Family (2009) and a bit more hopeful than the passionate division of the brothers in Miss and the Doctors (2013).