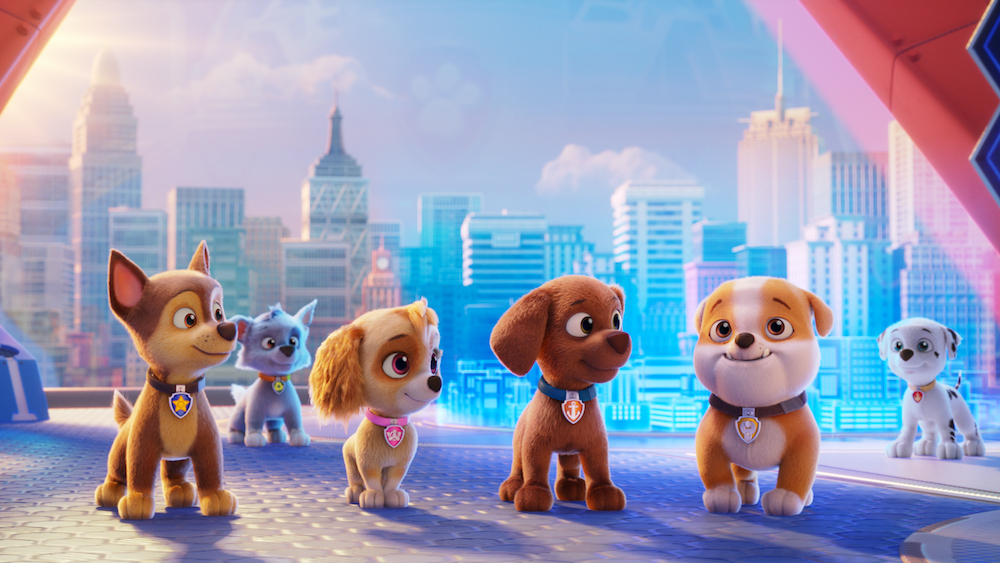 Here’s a quick tip: If you’re old enough to be reading this review, you’re too old to enjoy the childish pleasures of PAW Patrol: The Movie.

You may, however, have children who are under 10 years-old, in which case there’s a good chance there’s PAW Patrol merchandise — and there’s a lot of it out there — strewn throughout your house. The Canadian animated series, which has been running on Nickelodeon since 2013, is a big hit with the pre-school and grade-school set, and apparently Canadian Prime Minister Justin Trudeau. It’s now receiving a big-screen incarnation, predictably featuring some big-name guest voices, premiering simultaneously in theaters and on Paramount+.

The title refers to a heroic team of dogs — correct that, puppies, as is made emphatically clear — led by their 10-year-old human leader Ryder (Will Brisbin), who perform daring rescue missions to protect the residents of their bucolic home of Adventure Bay. Each of the pups, composed of various breeds, has a particular skill, including firefighting, aviation and policing. And they’re outfitted with a seemingly endless supply of cool, high-tech gadgets that would make James Bond envious.

While millions of kids adore the TV show, some adults seem to have serious problems with it. An Irish Times critic described it (one assumes with tongue in cheek) as “a shadowy attempt to normalize state-sponsored thuggery,” while a writer for The Guardian decried it as “the megalomaniacal kids’ TV show that is ruining my life.” A New York Magazine review summed it up succinctly: “Paw Patrol is Contemptible Trash.”

Alrighty now. Those seem like harsh judgments after seeing the movie version, which feels like harmless fun for its target audience. It’s easy to see why kids identify with the heroic pups, who manage to continually save the day in ingenious fashion while fueled by perpetual helpings of doggy treats. While the computer animation won’t cause the folks at Pixar to lose any sleep, it’s effective enough. And when those cartoon canines bat their impossibly large eyes, it’s hard not to wish you were heading directly from the theater to the local dog pound.

The film’s plot is set in motion when the Patrol’s longtime nemesis, Mayor Humdinger (Ron Pardo), takes over the nearby bustling metropolis of Adventure City and threatens to destroy it with a series of outrageously dumb ideas such as a massive fireworks display that could turn the town into a fiery inferno and a combination subway/upside-down-roller-coaster that works out exactly as you’d expect. The PAW Patrol heads over to Adventure City, where, with the aid of their newest member, miniature dachshund Liberty (Marsai Martin, Black-ish), they spring into action. They also settle into lavish new headquarters paid for by “officially licensed Paw Patrol merchandise.”

“The stuff sells like hotcakes,” a pup explains, as parents everywhere nod their heads in pained recognition.

The non-stop action is predictably frenetic, accompanied by corny jokes and a barrage of pop tunes (by the likes of Adam Levine and Alessia Cara, among many others) so peppy that the sugar rush provided by theater concessions will seem redundant.

The most incongruous plot element involves German Shepherd member Chase (Iain Armitage, Young Sheldon) experiencing post-traumatic stress upon returning to Adventure City, where he was once abandoned. His emotional travails prove so harrowing you begin to worry that the film will culminate in a sequence of canine Russian Roulette.

Several celebrities, no doubt eager to earn the respect of their offspring, contribute voice performances. They include Tyler Perry, Dax Shepard, Randall Park, Jimmy Kimmel and, playing a sassy poodle, Kim Kardashian. The vocal standout, however, is series veteran Pardo as the dastardly Mayor Humdinger, who looks like the Monopoly Man minus the monocle and whose every utterance is a delightful sneer. Is it wrong of me to admit that he’s my favorite character?