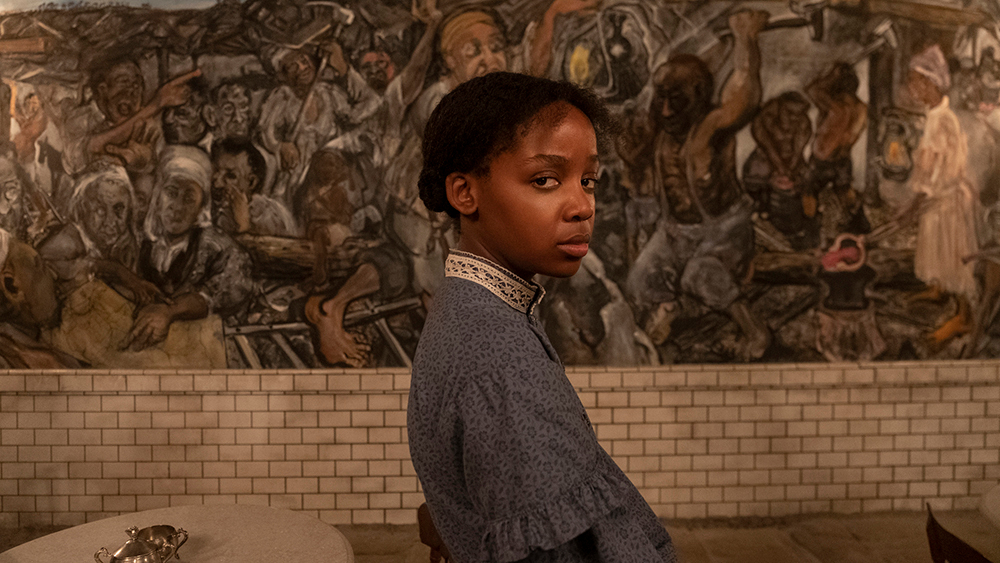 With his Amazon adaptation of Colson Whitehead’s prize-winning novel The Underground Railroad, Moonlight director Barry Jenkins walks confidently, if perhaps unintentionally, into the ongoing debate about Black-created/led movies and TV shows that center Black trauma. That debate has reached a fever pitch in recent months with small-screen offerings like Lovecraft Country and Them and, of course, real-world footage of Black people being killed by law enforcement.

Late in this Underground Railroad, a character approaches a roving poet with a simple and sad request: “If I gave you my sorrows, would you make them sound pretty?”

Directing all 10 installments, most running over an hour, Jenkins indeed makes a wide range of sadness beautiful, doing the same for strains of trauma and rays of joyful light. By nature of its subject matter, The Underground Railroad is an often arduous journey — a tough watch, but a rapturous watch, with occasionally questionable narrative choices generally outweighed by a spell that’s at once poetic and grounded.

We begin in unspecified antebellum times at a slave plantation in Georgia. Cora (Thuso Mbedu) is initially reticent to flee, scarred and haunted by the presumed escape, and disappearance, of her mother Mabel (Sheila Atim, astonishingly vivid in barely a cameo). After a series of escalating atrocities, Cora is finally convinced by newcomer Caesar (Aaron Pierre), who leads her away to a stop on the Underground Railroad.

Whitehead’s core conceit is that the “railroad” is a literal thing: a system of subterranean locomotives where the only price for being taken to freedom is a commitment to record your story in a ledger — to put a name and personal expression to the circumvented trauma. Of course, the path to freedom isn’t a direct one: Every new gradation of liberty comes with a gradation of injustice, each promising destination with a new type of enslavement, whether corporeal or spiritual. Pushing Cora forward is the hope for a true, complete (illusory) freedom, as well as her pursuit by vicious slavecatcher Ridgeway (Joel Edgerton), who views his failure to retrieve Cora’s mother as a personal stain. Ridgeway is accompanied by dapper and diminutive sidekick, and former slave, Homer (scene-stealing Chase W. Dillon).

The Underground Railroad, as both a book and a limited series, is structurally almost startlingly episodic, and therefore tailored for television rather than feature-length film. Each chapter puts Cora in a new situation that appears preferable to life on the plantation, yet conceals its own insidious version of racism. There’s a South Carolina community in which the ostensibly benign campaign for the “betterment” of African Americans is a flimsy cover for an experiment in eugenics. There’s a precarious safehouse in which Cora’s concealment becomes a dangerous prison of its own. There’s a Black farming cooperative in which the need for assimilation — to appear legitimate in the eyes of white business owners — seems to become a greater priority than helping escaped slaves. Within each episode, Jenkins builds suspense, while taking long and deep breaths of the sort you can indulge when you’re working for a streaming service willing to let episodes run as long as 77 minutes. Cora might be in a rush, but Jenkins is not.

Interspersed with the Cora chapters are long sections dedicated to Ridgeway’s backstory, and it will be a reasonable source of confusion and/or irritation for some viewers that, as characters go, Ridgeway is more “explained” than Cora; his motivations and choices are more fleshed-out, more evident. But in the period depicted in the show, “choices” and “motivations” are, literally, a white privilege. Ridgeway has decided to be an antagonist. Cora, for the better part of the series, doesn’t know or believe that she’s capable of being a protagonist. This means that things audiences are trained instinctively to want a heroine to do — pursue romance, embrace her action-heroine badassery like June Smollett’s character in WGN’s Underground — don’t come naturally for Cora, which can be tragic and infuriating. Both Mbedu and Edgerton are exceptional, but neither has a character who evokes exactly the response you may expect or think you want.

Jenkins’ methodical patience cheats those expectations as well. You can sense him resisting the episodic flow of the narrative in those exhausting running times and in the way he sets aside conventional momentum — in an hour spent primarily meandering through burning fields in Tennessee, for example, or a 20-minute grace note of an episode spent with a tertiary character not included in the book at all. With characters delivering dialogue in marble-mouthed variations on Southern accents — the cast, while spectacular, contains precious few actors actually from the American South — conversation and exposition alike become secondary to overall mood.

When the pieces come together, The Underground Railroad is remarkable. The ninth episode — which, among other things, includes the climax of William Jackson Harper’s arc as a freeborn man who takes an interest in Cora; an explosive rhetorical debate between characters played by master dialogue-spinners Chukwudi Iwuji and Peter De Jersey; and the series’ most extended action set-piece — is one of the best things you’ll see on TV this year. It’s the perfect intersection of story and style, a pendulum swing between horror and hopefulness.

The Underground Railroad sometimes falters. Jenkins never quite nails the Twilight Zone-esque unease of the South Carolina setting, or figures out how to build claustrophobia in the sections depicting Cora’s unnerving attic confinement. Still, it’s rare that Jenkins and cinematographer James Laxton let much time pass without a stretch of eye-popping imagery — and crucially never step over that delicate line into prettifying ugliness. Jenkins doesn’t hide from torture and abuse, but his concentration is more on soulful faces than battered bodies. The whole is enhanced by a rich, if sporadically overwhelming, sound design layering the natural and unnatural — cicadas commingled with the percussion of a train punctuated by the crackle of burning flesh.

It all results in a show that’s a challenging, binge-worthy interplay of standalone incidents, look-away unpleasantness that demands full immersion, denied emotional payoffs and unexpected catharsis. It’s a tough book to capture, but Jenkins has risen to the occasion.