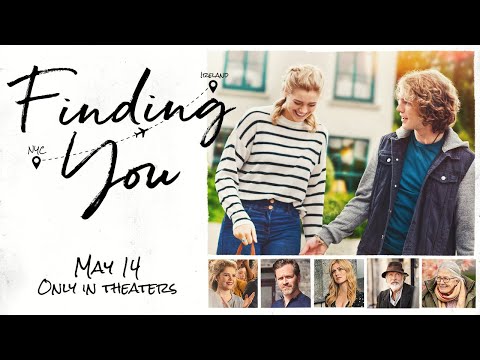 Finley (Katherine McNamara) has the passion and desire to be a professional violinist; however, she isn’t successful at getting accepted to a New York Conservatory.  As she is understandably feeling down and sad, her family encourages Finley to travel to Ireland and do a college semester as an exchange student. From the moment she steps on the plane, her life changes forever.

By a stroke of luck, Finley is upgraded to first-class, where she sits next to a young man and begins a conversation. Soon, she discovers the man next to her is a famous, hunky and studly heartthrob movie star named Beckett Rush (Jedidiah Goodacre). Our leads part ways after the flight, but don’t worry, the world brings them together again as Finley and Beckett, by luck, are staying at the same bed and breakfast.

Beckett is currently filming his latest medieval blockbuster but is struggling with his line delivery.  He is feeling jaded and has a general lack of passion for staying on the big screen. Beckett approaches Finley to assist him with reading his lines, but naturally, it’s not long until an unlikely romance begins to spark. While their romance begins, Finley is also dealing with other things in her life. Is Finley and Beckett’s romance something that is destined to last, or is it something that was only meant to stay for a brief moment? The two will attempt to overcome many personal challenges to find peace and hopefully move forward together.

The film opens with a touching moment, showing us Finley’s sadness at being rejected despite all of her hard work. It is an emotional concept to know that Finley lacks something magical when she plays on stage. But once Finley meets Beckett, I found the film changed quite quickly and dramatically, and not necessarily for the better.  This sentiment may differ for different audiences.

The dialogue between Finley and Beckett is certainly cheesy and filled with one-liners of flirtation, especially from the overconfident Beckett, who claims to be good looking and charming in all the right ways. The dialogue alone instantly tells me who this film is intended for: an audience of young teenagers.  The film and romance were also quite clean, which was welcoming.

As a plot, the film is not just a romance. It’s also a drama that includes many (and I mean many!) subplots, transforming a simple romance story into a two-hour movie. Some examples of the subplots include Finley dealing with being rejected as a violinist, on top of which she holds a dark secret about a tragedy in her family. She also wishes to help an old lady from a retirement village, sending her on another side quest. Beckett is no different when it comes to subplots. As he starts to fall in love, he questions many things beginning with his father, who serves more as a pushy manager than a supportive parent.  Beckett also deals with his past relationships and seeks direction regarding what he wants to do with his life, questioning if acting is genuinely what he wants.

Performances, for the most part, are fine and ok.  The actors here are generally trying with the script, but like the characters, some moments feel more like simple line reading, and some moments don’t feel natural and flow. As mentioned, the film has cheesy moments and line delivery that will either make the audience’s eyes roll or melt into their cinema chair. For me, nothing ever felt consistent or on point in the performances or their story. Watching Finley confront Beckett about her future one moment only to help her new elderly friend the next, then doing something else in the next scene made the film felt cramped and tiring.  But in the end, we know Beckett will pop up around the corner, and then Finley will have no choice but to speak with him and deal with another subplot.  This feels like a repeated process.

The film also pushes many repeated messages such as “Make Love Not War” and “Things are not what they seem”.  The film’s soundtrack gave out even more messages which scream encouragement to its audiences with lyrics like “wild and free”.  For the most part, the musical score will remind movie lovers of Riverdance, Lord of the Rings and Titanic.

Overall, Finding You is a teen romance that is filled with many subplots. The film is not just a romance movie following young love, but it is also a drama with a small mystery thanks to the side characters and subplots. As a romance, I feel it’s far too long, and the film feels far too crammed with numerous subplots.  Performances are ok, but the script feels forced and unnatural when our leads speak to each other; there are certainly moments of cheesiness. Nevertheless, I am confident there is a young audience out there who will love and adore every moment on screen. As a film, given how many stories are in the plot and the level of cheese delivery, I honestly feel this would have served far better as a TV miniseries rather than a full-length motion picture.