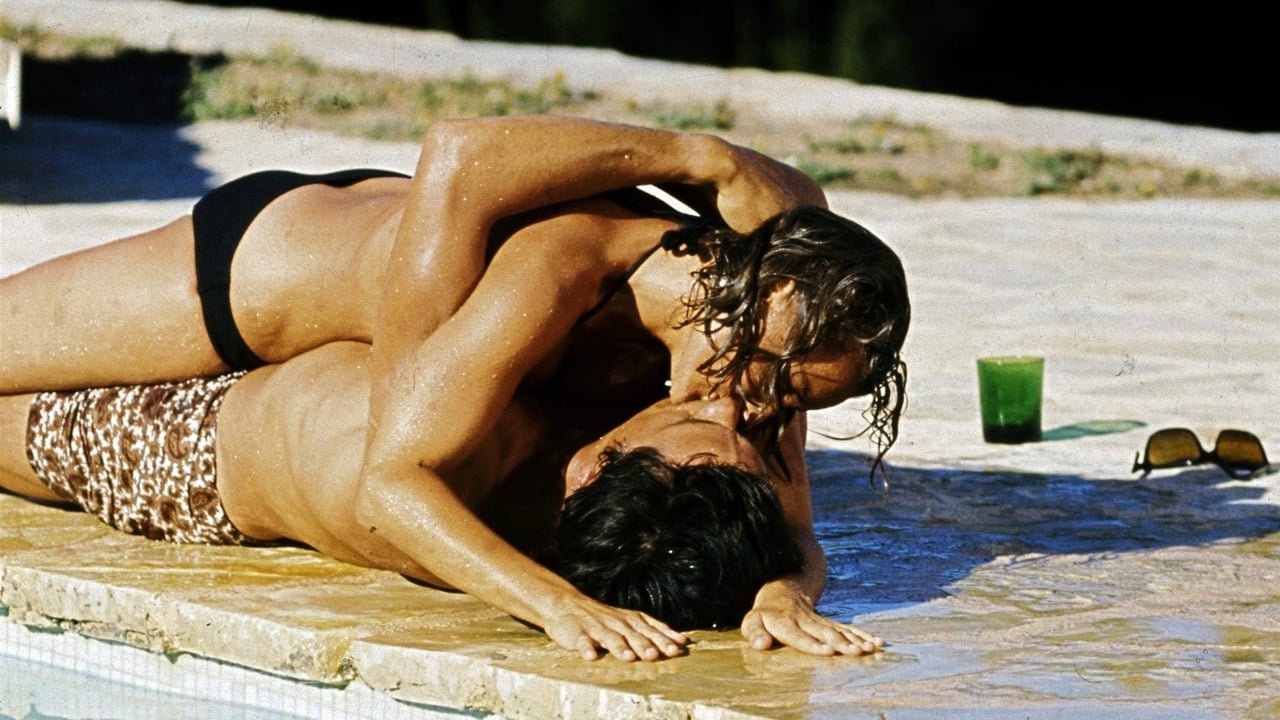 La piscine or The Swimming Pool is a French crime film, directed by Jacques Deray, who is known as a master of crime, and written by Jean-Claude Carriere; a long time companion of Luis Bunuel, for instance. La piscine isn’t necessarily the most accessible French crime film but I would say it is one of the best, at least from the 1960’s. It is an erotic, Antonionian film characterized by French existentialism. Although, it is not a perfect film, by any means, it is a surprisingly captivating and intriguing study on modern life as well as on alienation from the world and the society; loneliness, anxiety, love and freedom. The absurdity of being and the meaninglessness of life, how, in the end, nothing really matters.

The story happens somewhere in the French Riviera, where a couple is spending their holiday at a luxury château, borrowed from their friends. During the opening credits, we see reflections of nature on water: images of birds and trees. After the credits, the camera rises up and the water surface turns out to be a swimming pool, next to which there lies a man — an insightful shot of the vacant and anguished life of the bourgeoisie. Everything was a lie; beauty and the happiness of life were only elusive reflections — which happens to be the leading theme of Deray’s film.

Soon we hear a woman shouting “Jean-Paul,” and the man turns out to be Alain Delon. The woman (Romy Schneider) swims across the pool, comes to the man and they start kissing, fiercely. The physic happiness of this married couple is almost perfect. But details reveal pressures that begin to erupt, slowly, beneath the surface. In order to resist this anxiety, they make up the most shallow things for them to do and, therefore, invite a friend of theirs, Harry who surprisingly brings his 18-year-old daughter (Jane Birkin) with him. At a surprise party — that resembles the party of The Night (1961) by Michelangelo Antonioni — the pressures lead to tragic consequences.

La piscine strips seemingly beautiful and happy people down from their illusory facade. Jean-Paul turns out to be a failed writer whose fragile ego hides mysterious cruelty in it. On one level, he resembles Camus’ Mersault as an apathetic and disregard man who has lost his lust for life. His wife, Marianne (Schneider) is, in turn, a prisoner of her emotions and is unable to free herself from the chains of her husband. Harry is good-looking and wealthy but, in reality, all of his relationships are elusive and mendacious. Nobody cares about him. His daughter, Penelope (Birkin) is a beautiful young woman who arises to her femininity but finds it hard to compete with Marianne.

Jacques Deray relays a competitive, jail-like vision of the lives of these characters. We see them behind bars, pillars and windows; trapped in an unending rat race. They are captivated like wild beasts, who are ready to kill each other at any second. Furthermore, all the characters are spying on each other: Jean-Paul keeps an eye on Marianne and Harry, for he thinks that they might have an affair. Harry, on the other hand, spies on Jean-Paul and Penelope because his juvenile father instincts can’t bear a contestant. Marianne is also spying on them, because she thinks that she might lose the competition of Jean-Paul to a younger woman.

In the name of existentialist film, La piscine begins from nowhere and ends in somewhere which is quite the same. So why watch a film where nothing happens? Because, on the other hand, everything happens. Why read Kafka and watch Tarkovsky? For the very same reason. Although, La piscine is not a masterpiece, I would recommend it as an insightful film about loneliness and the illusion of idyllic life.