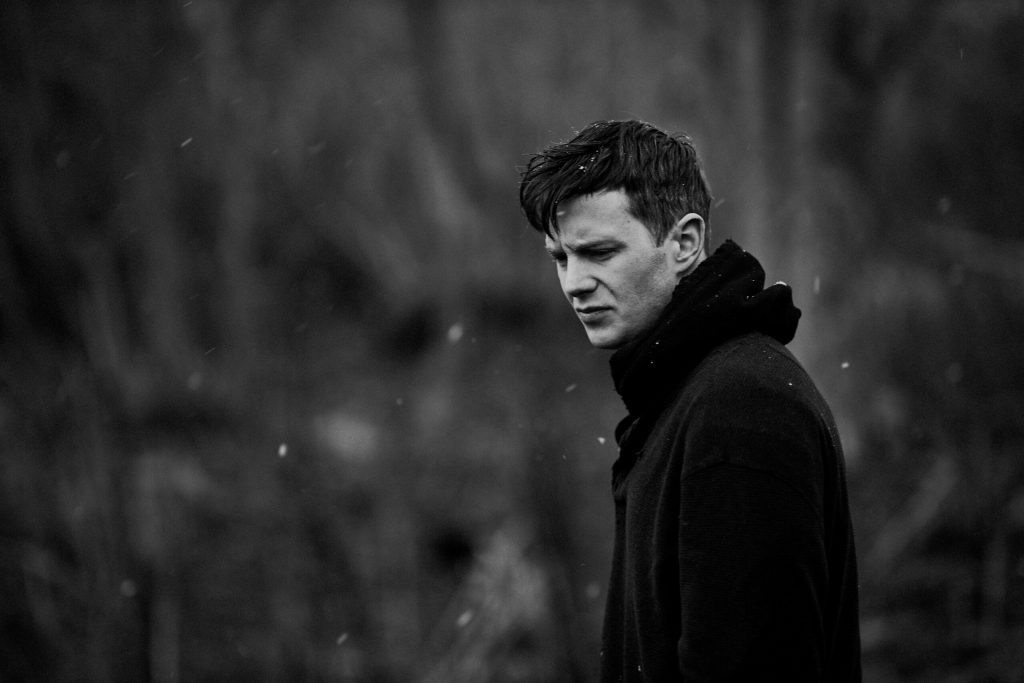 THE RIGHTEOUS is a 2021 noire style psychological thriller from writer/director Mark O’Brien. This full length directorial debut had its world premiere at the Fantasia International Film Festival in 2021, winning the Cheval Noir and Silver Award. THE RIGHTEOUS earned some positive buzz among critics during its festival run. I was granted an opportunity to watch the film for myself, and while most of my feelings for THE RIGHTEOUS are positive, I do have some gripes with it. Particularly towards the ending and shifty tone.

THE RIGHTEOUS tells the story of Frederic (Henry Czerny), a grieving man who’s struggling with his faith after he and his wife Ethel (Mimi Kuzyk) experience a tragic loss. One night, the couple hears strange noises outside of their home. There’s an injured young man named Aaron (Mark O’Brien) laying on the floor begging for their help. Frederic and Ethel tend to the Aaron’s injury and invite him into their home for the night. As time passes, Frederic begins to have doubts about Aaron’s story, resulting in what feels to be the wrath of a vengeful god.

What sold me on THE RIGHTEOUS from watching the trailer was the fact that it’s entirely in black and white. You don’t see that too often with new movies. Especially ones that fit into the “horror” category. It’s a bold and risky move, making THE RIGHTEOUS different from your average release. This film feels like a throwback piece; sort of paying tribute to the thrillers of the 60’s and 70’s. THE RIGHTEOUS wears its inspirations on its sleeve, and I’m willing to bet that it has to do with Mark O’Brien’s love for cinema.

THE RIGHTEOUS feels old fashioned, and the lack of color sells that concept. From a technical standpoint, this film is incredible. THE RIGHTEOUS makes great use of black and white with excellent cinematography. The visuals are absolutely gorgeous. With the nature of what takes place in the film, I do wonder if having it in black and white was the original intent. The overall plot is simple enough to digest. However, the places it takes you do become confusing. THE RIGHTEOUS is a character driven movie that focuses on a small cast of actors. It’s heavy on dialog and builds tension for some of its 97 minute runtime.

The film purposely throws you off by changing the tone throughout. It’ll go from one dread building scene to a moment of laughter and bonding between two characters. Some of it comes off as a morality play, even while its dark and dreary score puts you on edge. The tension buildup works a little too well. There were moments in THE RIGHTEOUS that got under my skin. This in large part is due to the incredible performances. THE RIGHTEOUS feels like a master class in acting. The entire cast does a tremendous job with their roles.

Henry Czerny is absolutely phenomenal as the lead character (Frederic); even if you do question some of Frederic’s odd actions. You may also recognize Henry from the film READY OR NOT alongside Mark O’Brien. The conversations between Frederic and Aaron (O’Brien) are the heart and soul of this movie. The chemistry between the two lead actors is great. When you add in the performances of Mayko Nguyen, Mimi Kuzyk, Kate Corbett and Nigel Bennett, you can’t help but be invested in the story.

THE RIGHTEOUS touches on topics of religion, guilt, loss and deception. It’s marketed as a noire horror thriller, but there isn’t enough of those elements for me to put this into the “horror” category. It’s mostly a drama that focuses on building dread. There are some dark moments of violence in the film, but it’s certainly not the main focus. As unsettling as the death scenes were, it was the buildup to the violence that made it work. THE RIGHTEOUS focuses more on uneasy dread and suspense rather than brutal violence. This is most noticeable with the interactions between the characters. The endgame begins to make sense once some truths are revealed in the story.

The elements of “horror” in THE RIGHTEOUS are so few and far between. The elements that are present work very well (for the most part). At times, THE RIGHTEOUS pulls you into a false sense of security. You’ll encounter a few “jump scares” just when you think it’s safe. These unexpected scary moments might take you out of the film. It did for me, and my interest in the story was beginning to fade towards the end. The plot takes a bizarre turn, and for whatever reason there’s a supernatural element thrown in. It got to a point where I was beginning to wonder if what I was watching on-screen was actually happening. It doesn’t help when the film decides to time jump after having one of those “scary” moments.

What works most with THE RIGHTEOUS is the acting. Writer/Director Mark O’Brien works as an actor for movies and television. You may remember him most from such mainstream genre films like ARRIVAL and READY OR NOT (as mentioned with Henry Czerny) . Most of O’Brien’s directing experience comes from television and some award winning short films. THE RIGHTEOUS is Mark O’Brien’s full length feature film debut. This is an amazing achievement, and with this film it’s clear that O’Brien knows what he’s doing both in front of and behind the camera.

Where THE RIGHTEOUS falls short for me is with the ending. Without giving anything away, I will say that the film’s climax left me with more questions than answers. I compare this ending to that of DONNIE DARKO. I think the intention was to let the audience interpret what the biblical ending means. Despite its shortcomings, that last half hour didn’t ruin my overall experience with the movie. THE RIGHTEOUS is a gorgeous looking pre-pandemic film that should be watched. If you’re into slow burn black and white thrillers, this one might answer your prayers.

THE RIGHTEOUS is set to be released through Arrow Films on June 10th, with a digital release in the UK, US and Eire on ARROW (the brand’s SVOD service). Although I had a pleasant time watching the movie for myself, I highly recommend that you (the reader) watch the trailer before diving in. As with every movie ever made, THE RIGHTEOUS isn’t going to be for everyone. It’s a well crafted thriller that does a tremendous job of building tension. For that alone it’s worth the price of admission; I just don’t see myself going for rewatch it anytime soon.