Crimes of the Future 2022 Movie Review
Skip to content 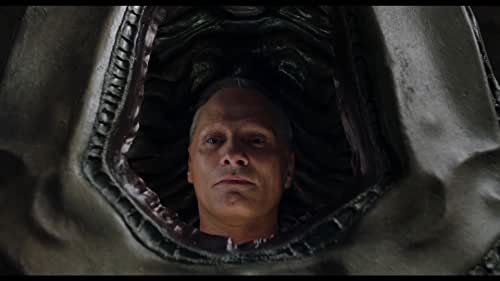 Crimes of the Future 2022 Movie Review

Watching David Cronenberg’s beguiling new dream-noir — a twilight vision of tomorrow in which the next phase of human evolution is considered, at least by some privately self-conflicted bureaucrats, as a punishable insurrection against the very nature of humanity itself — I couldn’t help but think about the current plague of extremist politicians who are using their static interpretation of a 235-year-old document as justification to dictate what happens inside living people.

Abortion might seem like a counterintuitive analogue for a story that argues the need to let nature run its course, but “Crimes of the Future” is nothing if not a film about the barbaric futility of trying to police new flesh with old principles. Our bodies interpret the world that our brains have created for them to inhabit, and anyone too stubborn or scared to hear what they report back probably doesn’t have the stomach to survive whatever might be waiting for us on the other side of the horizon.

Whether you have the stomach to survive “Crimes of the Future” would seem to be a more complicated matter. At a time when holy shit, you have to see this insanity has become the fastest shortcut for arthouse fare to get around the always-suffocating layers of superhero movie hype, it was inevitable that Cronenberg’s first movie since “Maps to the Stars” would be positioned as some kind of sick endurance test that found him revisiting the familiar preoccupations of body horror classics like “Dead Ringers” and “The Fly” so that he could combine all of their gnarliest moments into a career-spanning orgy of squelching latex. The tone of the press coverage leading up to the film’s Cannes premiere was basically “any upstart auteur can fuck a car, but only OG daddy Cronenberg can make love to it.” The director himself even suggested that people would start walking out within the first five minutes.

What Cronenberg neglected to specify is that those imagined audience members — as implausible as the crowds who supposedly fled in panic when the Lumière brothers aimed a train at them — would be stampeding up the aisles in response to tragedy, and not gore.

Don’t get me wrong, “Crimes of the Future” is Cronenberg to the core, complete with its fair share of authorial flourishes (the moaning organic bed that its characters sleep in is a five-alarm nightmare unto itself) and slogans (“surgery is the new sex”). At the same time, however, this hazy and weirdly hopeful meditation on the macro-relationship between organic life and synthetic matter ties into his more wholly satisfying gross-out classics because of how it pushes beyond them.

Stoned and crepuscular in a way that evokes Jim Jarmusch’s “Only Lovers Left Alive” as much as it does any of Cronenberg’s own films, “Crimes of the Future” shifts the director’s lifelong focus on the mutability of flesh into a more philosophical gear, exchanging the semi-cautionary nature of his earlier work for a less aggressive study of transmutation. Its threadbare story might follow an arc similar to the likes of “Crash” and “Videodrome,” but the older Cronenberg now arrives at the end with a wiser sense of acceptance. Where those earlier movies staged hostile takeovers on the human body, the hypnotic “Crimes of the Future” finds the invasion coming from within — even in death, it hears the faint sounds of a harmony.

Back to those hypothetical walkouts. In a sequence whose dispassionate remove proves typical of the film that follows, “Crimes of the Future” begins with a young boy playing on the rocky shores outside his house, a capsized cruise ship jutting out from the water in the distance. It’s a fittingly oblique monument to an empty world gone sideways; a world so ravaged by unspecified (but likely climate-related) horrors that the only people who can stand it are the ones who’ve evolved beyond the ability to feel pain or pleasure. Some of them have evolved in other ways, too, as we infer when that same little boy eats a plastic garbage can for lunch. Others are frightened by that, as we infer when the boy’s mom promptly smothers him to death with a pillow.

This kind of thing probably isn’t unheard of in the age of Accelerated Evolution Syndrome, when people are developing so many new parts and behaviors that the government has created a National Organ Registry to keep track of them all (and maybe even nip the more promising mutations in the bud).

Performance artist Saul Tenser (played by a phlegmatic Viggo Mortensen) is prolific enough to keep the NOR busy enough by himself. Kept alive by the aforementioned OrchiBed that reads his body and reacts to the new organs that keep growing inside of it, Saul has become a kind of unwell oracle for the evolutionary age. Context is hard to come by in Cronenberg’s elliptical script, but it seems as though Saul’s body — and his willingness to display its ever-changing contents — have made him the biggest celebrity his world has left.

Key to that is his creative partner and personal surgeon Caprice (Léa Seydoux, shimmering full of wide-eyed wonder with every incision), who operates on Saul with a sarcophagus-like “SARK” machine as part of the public shows they create from his “designer cancer.” Bodies have never been more of a spectacle in a Cronenberg film, but “Crimes of the Future” is always quick to remind us that inner beauty is all the rage these days. And no one gets off on the new sex like Caprice. Whether her relationship with Saul ever inspires them to have the old sex is an open question, but reproduction is just one of the many different topics that movie titillates without touching.

Caprice isn’t the only one who’s inflamed by the sheer possibility that Saul’s body presents. Even Timlin, the sputtering mouse girl who works at the NOR, can’t help but let her freak flag fly at full mast every time Saul comes around (she’s played by an under-used but otherwise fantastic Kristen Stewart). There are other players who orbit around Saul’s work, as well, namely the dead boy’s mysterious father (Scott Speedman), his unrepentant mother (an inspired Lihi Kornowski), and the Rosencrantz and Guildenstern-like henchwomen who work for the SARK manufacturer and sometimes like to get naked together in the machine for kicks (Berst and Router are played by Tanaya Beatty and Nadia Litz, whose carefree performances evoke Mr. Kidd and Mr. Wint from “Diamonds Are Forever”).

Mostly, however, “Crimes of the Future” clings to Saul as he coughs around town cloaked under black Sith robes and waits for another revitalizing session in his freaky SARK machines. The conspiracy swirling around him — something about synthetic food and a more permanent evolutionary step — takes shape in the background, occasionally drifting into view like a cloud that can’t decide if it’s ever going to rain. The lackadaisical plot contributes to the film’s general sense of weightlessness, as if the story itself were uncertain of how to evolve from one scene to the next, and overwhelmed by the sheer wealth of possibilities. No matter, all of Cronenberg’s narcotized subplots and asides are “juicy with meaning,” to quote a line that Léa Seydoux delivers with more sizzle than anyone else on Earth possibly could.

So does the uncertain dynamic between Saul and Caprice, as Cronenberg finds a perversely moving sweetness in the way they face the future, alone and together, even as Saul’s body continues to turn against itself. Conflicted as he is about how to accommodate for the aggressive transformations of a body — and a world — that no longer seem habitable, there’s something beautiful about Saul’s continued pursuit of creativity in the shadow of death.

In true Cronenberg fashion, “Crimes of the Future” doesn’t fight for the old flesh at the expense of the new, nor cling to the protocols of yesterday in a futile and dehumanizing effort to stave off the possibilities of tomorrow. On the contrary, this sly but surprisingly warm gesture (from an artist in an aging body of his own) uses its premise to question the authorship of the human body, tap into the fear of losing it, and reach towards the seductive embrace of what comes next. At one point, Caprice drops to her knees, unzips the fly that runs across Saul’s stomach, and performs something akin to oral sex on the gaping wound she exposes below; as Saul himself might put it: “Art triumphs once again.”

Crimes of the Future 2022 Movie Review