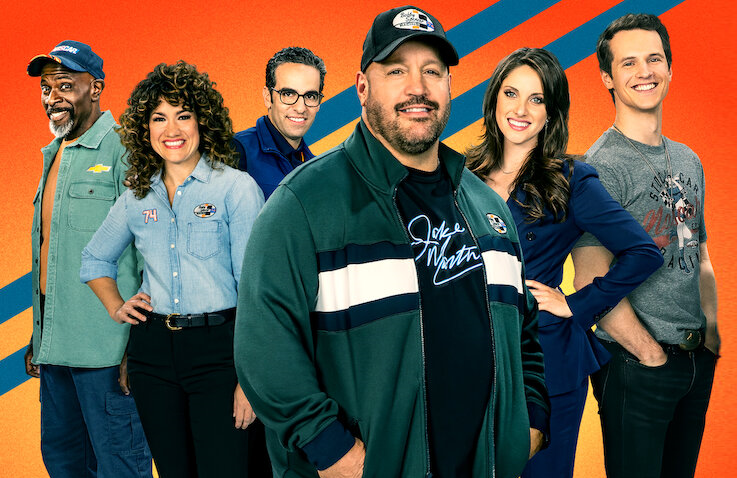 The Crew on Netflix is catching a lot of attention lately. The all new comedy show is all set to make you grin and laugh hard. Kevin James returning to the small screen with Netflix is definitely some news to be happy about. Kevin has been with the NASCAR racing team owned by Bobby Spencer (played by Bruce McGill) for a long time of 25 years.

The Crew is full of moments to make you laugh your stomach out. The race team was not being able to perform or function quite well like Jake’s crash in the first lap of his last race. Bobby decides to retire and puts his young daughter Catherine (Jillian Mueller) in charge of the system. The NASCAR swerves off track when their new boss arrives to shake things up a bit. There are some very fun filled moments where you will definitely love this show even more. The team includes a master mechanic Chuck (Gary Anthony Williams), an engineer Amir (Dan Ahdoot) and an office manager Beth (Sarah Stiles). We see some bonding between Kevin and Beth when he and Beth talk about how he goes right to her whenever he gets dumped by yet another woman who doesn’t appreciate how consuming his job is. The new boss Catherine really wants to leave an impression on the team and is confident to put her own stamp on the team.

The comedy show ‘The Crew’ has pretty good actors. Kevin James starred as Kevin Gibson, Jillian Mueller as Catherine Gary Anthony Williams as Chuck, Dan Ahdoot as Amir, Sarah Stiles as Beth, Bruce Mcgill as Bobby Spencer. Every actor has played their part impressively. There is never a boring moment. The show is full of comic punches enough to make your stomach ache with laughter. Abc entertainment loved the choice of star cast as no one fails to impress the audience with their own style.

If you were a fan of King of Queens and you dearly miss it then ‘The Crew’ will definitely make you happy. It is a good watch if you are looking for something light and feel-good. It is enjoyable with a story set having an interesting background. Kevin James is the star of this style of the show though. You may not dwell deep into the plot of the show but there are definitely many moments filled with ‘laugh-out-loud’ moments enough to keep you entertained. We give this show a 4.5 out of 5 stars.