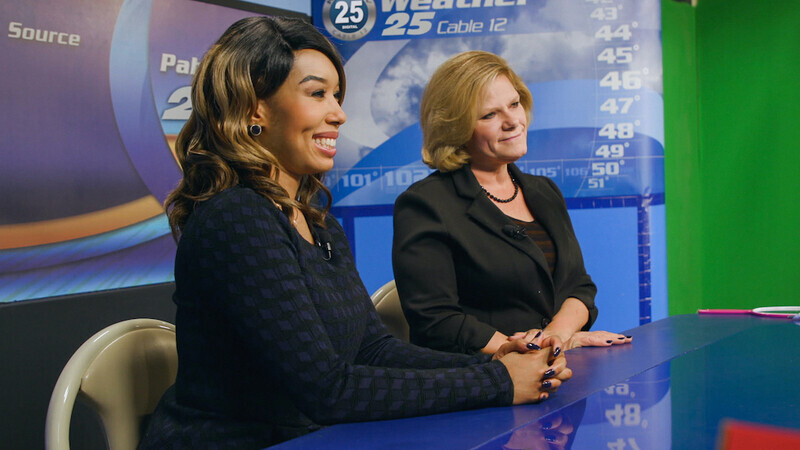 HBO’s Small Town News: KPVM Pahrump is a reality TV show set in an actual workplace populated with good-natured and endearing people. It’s similar in structure and tone to truTV’s delightful Tirdy Works and the 2012 AMC show Small Town Security, both of which were focused on the kinds of small, intimate, quirky workplaces that make for great television.

While workplaces are perfect settings for reality TV, with their pre-existing relationships and conflict with actual stakes, they’re also unlikely settings because the demands of a production aren’t very compatible with work. Finding a company willing to give cameras full access is its own challenge, so smaller workplaces are better candidates.

Sometimes we get a remarkable show like Netflix’s Sunderland ‘Til I Die or Tirdy Works, but more often we end up with heavily choreographed scenes that bring the drama but also questionable authenticity. Bravo used to thrive on those shows, such as Jeff Lewis’ Flipping Out, though inevitably they get tired as certain cast members bend over so far backwards to try to get attention that they end up with their heads up their own arses.

Small Town News: KPVM Pahrump (HBO, Mondays at 10) avoids all of those hazards, and as a result, is a surprise and a delight. It does not feel like an HBO documentary series, though it carries that label. Oh sure, it has high-quality production values, but it’s not overbearing in an attempt to make a point. It’s episodes are also slight, just 28 minutes, not bloated and overstuffed, and there are only six of them, which HBO is doubling up on Monday nights. But there is a lot to love in that small package.

KPVM is a small station created in 1997 by Vern Van Winkle in Pahrump, Nevada, which is about 60 miles west of Las Vegas. The station is populated by a handful of staff members who are kind and just naturally have fun with each other, and don’t need to be fed alleged jokes by a producer.

What makes Small Town News so watchable, though, is how absolutely committed and serious the station’s staff members are to what they’re producing, even if they broadcast the kind of content often mocked by Hollywood, or even HBO’s own Last Week Tonight

The station is so small most everyone does multiple jobs. Deanna, for example, anchors a newscast while also serving as news director and assistant manager, in addition to reporting, listening to the police scanner, and sometimes giving students tours of the station. She also does the dishes and vacuums, and tells us, “I try to get rid of flies.”

When she learns that yet another staff member is leaving—on the same day that Eddie Van Halen died—she breaks down. “Everybody always runs out the door,” Deanna says. While she and Vern have playfully sparred (he’s a Trump supporter and somehow also an old-school Republican; she mocks Fox News to his face), he comforts her and reminds her of how often this has happened to them the past.

“This is really the net result of 23 years of hard work,” Vern says at the start of the first episode, when he explains the station’s history and plans to expand into Las Vegas, and you really can see all 23 of those years of history.

Small Town News: KPVM Pahrump has a lot of friendly humor—and some juvenile jokes, too. (The station runs an ad for an actual pizzeria in which the narrator says, “When was the last time you had a mouthful of Big Dick’s pizza?”)

What makes it really work is that the show has an opportunity to mock its characters, but does not; there’s no judgment coming from the soundtrack or the editing. Instead, Small Town News allows us to laugh alongside the cast, such as when the weatherman produces a bit using a green screen in which a Nevada mountain is revealed to be his hair as he stands up.

At one point, Vern shares a list of people he looks up to as models for pursuing their dreams and building careers from nothing: Jason Statham, Deepak Chopra, and Freddie Mercury. That’s quite a list, but also a completely earnest one, in part because of Vern’s embarrassment about his inability to either pronounce or remember Chopra’s last name.

I do wish we would spend a little more time with some of the peripheral characters, even those who leave, like a particularly passionate editor who storms off during a meeting for reasons that remain unclear. Giving some people a single scene or just one moment risks turning them into caricature, though Small Town News mostly avoids that.

The first episode includes a montage of human interest stories that have aired as part of the newscast: the sale of a brothel; the opening of a new restaurant, where an employee describes the menu as “we have tacos”; footage of “donkey basketball” and the Mr. Hunk from Pahrump Competition; and cameos from residents Heidi Fleiss and Ron Jeremy.

There is humor there, and perhaps some people will watch that with a sense of derision. I felt a strong sense of community, and the stations’ role in creating that connection. There’s been an absolute decimation of local news in recent years, and we’re now a country now full of news deserts, where people lack any locally produced or owned media. Small Town News: KPVM Pahrump shows what’s been lost while by focusing on the life that’s out there in the Nevada desert.