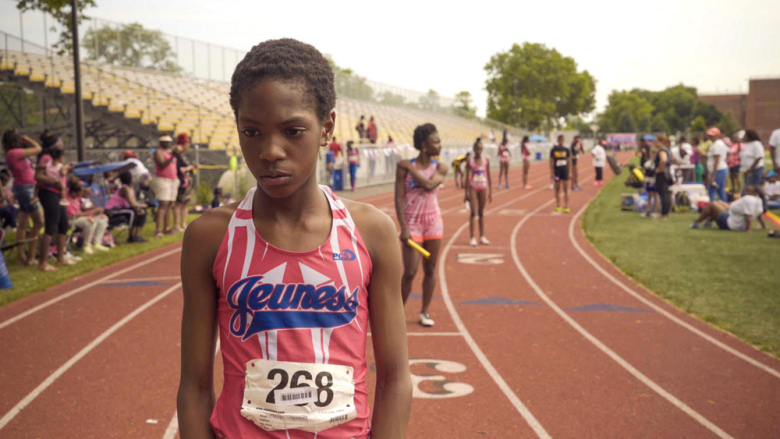 “Sisters on Track” is an inspirational sports documentary that begins at the point where a Hollywood adaptation of this story would likely come to a tear-jerking end: Unhoused Brooklyn runners Tai, Rainn, and Brooke Sheppard being invited on “The View” to celebrate Sports Illustrated Kids’ recent decision to name them 2016’s SportsKids of the Year, and — in an on-air shock to the siblings and their single mother Tonia Handy alike — receiving the keys to a fully furnished Bed-Stuy apartment courtesy of Tyler Perry, who’s paid for them to live there for the next two years.

The dash of context that follows makes it clear that the Sheppards have already survived a marathon to get to this moment, and that directors Tone Grøttjord-Glenne and Corinne van der Borch could have made an exultant (if harrowing) film about the unique hurdles these girls cleared on their way to becoming unlikely track stars.

But this movie isn’t about that part of their lives, perhaps because Grøttjord-Glenne and van der Borch weren’t there to film it. Instead, they embedded with the Sheppard family during the four years that followed, watching as the girls sprinted towards high school with the wind at their backs. The resulting documentary is a nuanced, humane, and more naturally uplifting portrait of three young people trying to keep pace with their dreams in a relay race that’s never offered them the inside lane.

It’s also scattershot and strangely hurried for a film shot over such a long period of time about such wonderful subjects. There’s an understandable logic behind the decision to cut the second act of the Sheppard family’s story into the kind of poppy and percussive Netflix content that might appeal to kids the sisters’ age, but that approach grows frustrating as the cast grows into a community and the film’s perspective widens. While Grøttjord-Glenne and van der Borch eventually sketch out a rich American saga of systemic oppression and personal opportunity that begs for a closer look, “Sisters on the Track” often seems unsure whether to pace itself for a Steve James epic or a segment of “Real Sports.” The result is a powerfully intimate movie that’s varnished with the gloss of a puff piece, albeit one filled with such extraordinary people that it still makes a lasting impression.

The Sheppard sisters themselves are of course at the top of that list, even if we don’t get to spend a ton of time getting to know them. None of them knew that they had a natural talent for running, all three of them excelled when a babysitter signed them up for a track meet, and many of the most revealing moments of “Sisters on Track” meditate on the varying degrees of ambivalence the girls have about their ability.

Brooke, only nine years old when the film begins, says that she was almost ready to “give up” her hopes for the future before Perry swooped in to rescue her family from the shelter. She isn’t necessarily passionate about running (her real dream is to be an artist), but anyone capable of throwing in the towel at that age is also capable of recognizing an opportunity when it comes along. Rainn talks too much in class, and struggles to be a regular tween when so much pressure is placed on her athletic performance — a burden made all the more difficult by her love of sports and the escape they provide. She wants to be an Olympian someday. Tai is the oldest, and the fastest (at least for now), and the first one to confront so many of the more universal growing pains that will later befall her sisters. She’s also the most acutely aware of what’s at stake for her family, and the most stressed by it; the hurt she internalizes after throwing a crayon at a teacher is only matched by the grace offered by coach Jean Bell, an administrative law judge who started the Jeuness Track Club in 1985 to pass down the baton she was given by track and field and help disadvantaged girls outrun society’s expectations for them.

While the Sheppard girls’ mother is an unambiguous hero in this story — a remarkable single mother whose tenacity and self-sacrifice is shadowed by the loss of her only son, who was shot to death at a party some time before filming began — Tonia works too many hours to raise three daughters on her own. Jean is happy to pick up the slack and play the role of a second mom; she’s the stern one who teaches the girls about tampons with a straight face and dispenses tough love in a way that bolsters the sisters’ potential by allowing them to be disappointed in themselves.

Jean is the kind of mentor that even the most privileged kids would be lucky to have in their lives, and while “Sisters on Track” leaves you grateful for the chance to meet her, such a remarkable character makes it that much harder for this uneven film to find a steady lane for itself. In that light, it’s unexpected that the documentary’s most chaotic passages are also some of its most rewarding. The girls get iPhones for Christmas one year — a gift from Whoopi Goldberg — and use them to offer a less varnished look into their lives, complete with an obligatory pimple-popping scene that stops just short of body horror. Later, in a bit that almost slips away before it registers, the girls take control of the filmmakers’ equipment and start crewing their own shoot. It’s a playfully literal expression of the sisters’ readiness to seize hold of whatever opportunities they get to tell a story that’s different from the one white America has written for them.

Clear turning points are few and far between (Grøttjord-Glenne and van der Borch take a rather casual approach to the track meets themselves, contextualizing them as a means to an end), and the film tries not to dwell on the difficulties the Sheppard girls have to run through on their way towards the rest of their lives. The challenges are made clear, and coach Jean helps the sisters confront them with the directness of someone who knows that no one has ever sugar-coated the truth for Brooke, Rainn, and Tai before.

There’s an understandable edge to Jean’s voice when she tells the girls there are only seven Black kids among the 395 students that comprise Stuyvesant’s incoming freshman class, but neither the Sheppard sisters nor the women who raise them have been conditioned to slow down when they see another hurdle in their path. No one can run the girls’ races for them or fix all the ways those races have been rigged against them, but it’s amazing how much strength someone can find in every stride when people convince them they have an actual shot at winning.