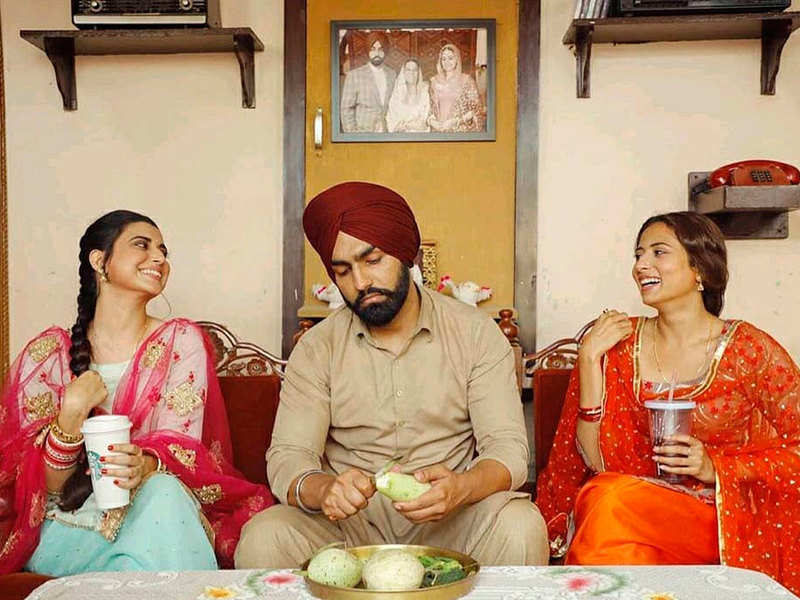 It all starts with a glimpse of the happily married life of Nirmal (Ammy Virk) and Nasibo (Sargun Mehta). There’s love, there’s laughter, there’s everything but a child. Neither medicine nor any spell worked for the couple, and even after eight years of marriage, their family appears incomplete. This is when Nasibo’s mother-in-law (Nirmal Rishi) gives a suggestion that they should persuade Nirmal to have a second marriage. She even conveniences Nasibo to find the right girl for her husband. Then Nasibo starts the bride’s hunt for her own husband, leading her to her younger sister Kirna (Nimrat Khaira). Thinking that it would be easier for her to manage things with her sister as her saukan, Nasibo forces and manipulates Nirmal for the wedding.

If you think, the drama ends there, you are in for a surprise. The drama actually starts after Nirmal and Kirna get married. Sharing a husband wasn’t as easy as Nasibo thought. Kirna won the hearts of both her husband and mother-in-law and changes everything. Nasibo feels left out, and then begins the battle. From using cuss words, to literally hitting each other, the sisters turned ‘Saunkan Saunkne’ stop at nothing. They create a complete madhouse.

Written by Amberdeep Singh ‘Saunkan Saunkne’ is an out-and-out comedy. Set in the 70s-80s the movie’s plot is very sweet, and the punch of situational comedy added to it works like a magic. Amberdeep as a writer has never failed in tickling the funny bone, and this time as well he has lived up to his name.

At the same time, director Amarjit Singh Saron who is only a couple of movies old in Pollywood has proved that he is here to be the king of the comedy genre. Just like his last release ‘Honsla Rakh’, this directorial also shows a fine execution. Every scene in the movie had a lingering effect, and that happens only when the captain of the ship has a tight grip over his project.

Moving further, now we are going to talk about the performance of the actors. Ammy Virk has shined beautifully in the movie. From being a loving husband to being the poor man caught in the crossfire of his two wives, he has played every shade of his character with utmost finesse.

Now coming to the leading ladies of the show – Sargun Mehta and Nimrat Khaira, all we can say is that no other two actresses would have been able to pull off the roles the way these two did. In movies like ‘Qismat’ and ‘Surkhi Bindi’, we have seen Sargun delivering emotional performances with ease. But this time, her comic side has come out, and we just can’t get enough of it. Her ‘nautankis’ and dramas are a delight to watch.
Nimrat Khaira on the other hand has played the perfect ‘tikhi mirch’ in the movie. In real life, we have hardly seen her speaking or raising her voice. Even in her songs, she comes out as a very sweet girl. In ‘Saunkan Saunkne’ you will see her never before seen avatar. The way she fights with her husband, sister, and mother-in-law, leaves everyone in splits. To be honest, her hold over her character is phenomenal.

And last but not least, we have to mention the work of veteran actress Nirmal Rishi. She didn’t play a side character but rather had a pivotal part in the movie. Every time when she came on the screen, we couldn’t see any other actor at all. From her acting to her dialogue delivery to her screen presence, everything about the seasoned actor was captivating.

In a nutshell, everyones’ performance was engaging and the script in itself was very entertaining; thus, it is a laughter riot. However, there’s just one thing that didn’t work for us – the length of the movie. The movie seemed a little stretched in the second half, which we believe is a common issue in Pollywood. Nevertheless, it still offers you a great dose of laughter and is a perfect family entertainer