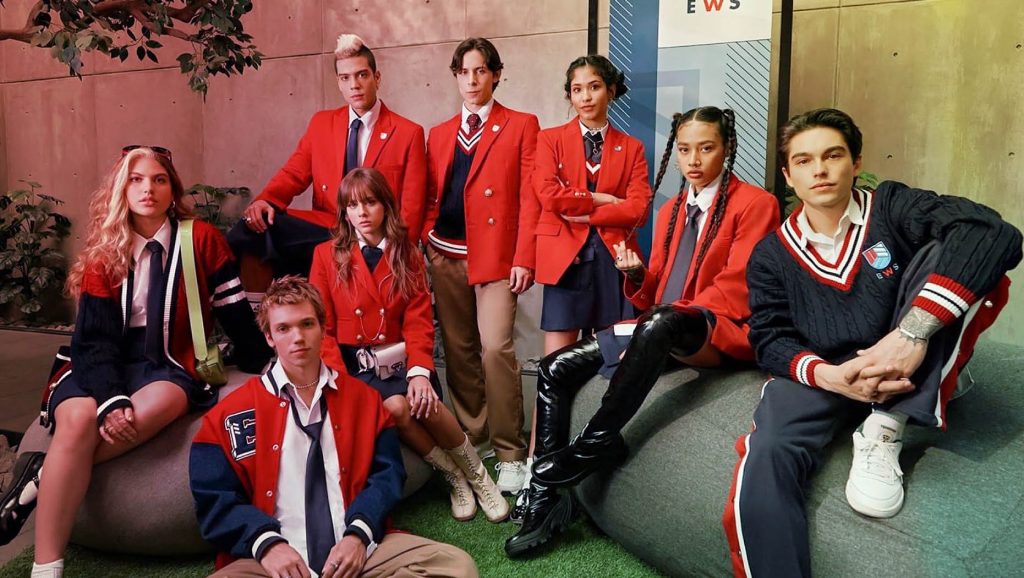 A teenage girl is woken up from her bed by masked people wielding the flashlights on their phones.

The Gist: The masked people herd the freshmen into a big room and greet them using disguised voices. We then flash back a few hours. It’s the first day of the new term at the Elite Way School, which is now called EWS. It has schools of business and architecture, but it’s most famous program is its music program, from which came the famous singing group Rebelde.

Entering the singing program at the international boarding school is Jana Cohen (Azul Guaita Bracamontes), a social media pop star who wants to have a serious music career; Estebán Torres (Sergio Mayor Mori), a scholarship student who doesn’t know if he’ll fit in with the rich kids; Luca Colucci (Franco Masini), the spoiled son of one of a wealthy and influential businessman who barely sees him; Dixon (Franco Masini), a rapper from Colombia who wants to maintain his tough image; M.J. (Andrea Chaparro), a religious and sheltered kid from California; and Andi (Lizeth Selene), a rebellious kid who seems to be in a war with her mother’s boyfriend.

They’re told by Emilia Alo (Giovanna Grigio), an upperclassman who herself is a scholarship student from Brazil, that the Musical Excellence Program (MEP) is their fast track to a successful career. Tryouts will be the next day, and the judges will be Emilia and Sebe Langarica (Alejandro Puente), who also happens to be Jana’s boyfriend. Despite Sebe’s presence, though, Jana and Estebán take an immediate liking to each other, especially when he tells her that she shouldn’t be ashamed to audition using one of her pop songs.

As the students mix and mingle, we see that Jana and Luca have a history; she accidentally outed him a few years prior, and he’s been resentful of her ever since. Luca is annoyed he has to room with Estebán and Dixon, while M.J. is excited to have Jana as a roommate. Despite the presence of Perfecta Lourdes (Karla Gazcón), who vows curfew will be observed, a few of the students leave their rooms and wander the halls. Estebán and Jana bond over his rearrangement of one of her songs, and Luca dances like no one is looking.

That night, the masked students wake up the freshman and herd them into the music room. In front of them are the uniforms worn by the original members of Rebelde when they were at the school. They order Jana, Estebán, Luca, M.J., Andi and Dixon to don the uniforms and perform one of the band’s songs, hoping to humiliate them. But when the music comes together and the five of them do a good job, even more chaos ensues.

This new version of Rebelde seems like a pretty standard-grade teen drama, with the requisite crushes and love triangles, characters who are “good” and “bad”, and some drama related to a shady student organization, here called The Lodge. We came away from the first couple of episodes feeling comfortable spending time around this group of teens, but there was nothing particularly remarkable about this group that would make us want to keep watching.

There are stories roiling underneath the singing and rapping, as we see in the second episode when Estebán shows a particular interest in not only Luka, but his father Marcello Colucci (Leonardo de Lozanne) as well. He tells his father when he gets dropped off that he’s sure that this is where he should be, but it’s apparent that he’s not at EWS for the music program, but to connect with Luka and Marcello.

Even though the storyline has a bit of telenovela feel to it, at least it deepens Estebán beyond the trope of the working class kid trying to fit in with the rich kids. We hope that the rest of the cast gets this treatment, but the cast is more than watchable enough to carry the more superficial intial few episodes.