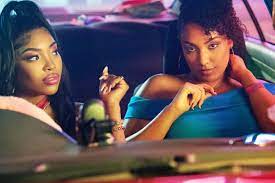 Shawna Clark (Aida Osman) works the front desk at the Plymouth Hotel, but when one of the guests recognizes her as a rapper he’s seen on social media, she has to tell him that she’s still doing her art.

She’s a message rapper; she’s even done some of her videos in masks, because she feels her message is more important than her looks. Besides, she thinks it’s high time women hip hop artists do more than stick out their tits and asses. She’s especially dismayed when her co-worker Maurice (Daniel Augustin) shows her a video done by the producer Shawna used to work with; it happens to have a white female rapper, doing the twerking and other T&A stuff she refused to do.

Out of the blue, she gets a FaceTime from her old high school friend Mia Knight (KaMillion). They haven’t seen each other much since high school ended, and since Mia had her daughter. But Mia is doing makeup for some women staying at the Plymouth and she needs someone to watch her daughter — Lamont (RJ Cyler), the father, didn’t pick her up like he promised.

After ruminating over her missed career chances, Shawna reaches out to Mia to see if they can get together. Mia, for her part, is hustling three jobs, including an OnlyFans page, and still has to call and pry money out of Lamont. She decides to take Mia up on the offer, despite being upset that they lost touch. By the end of the night, they’re back to their old chemistry, and an IG live of the two of them rapping in the back seat of Mia’s car goes viral, leading Shawna to an idea.

A lot of the first episode of Rap Sh!t is stylized; a lot of it is told in a “phone’s-eye view” perspective, as if Shawna and Mia record so much of their lives, that they should be viewed that way. It can be disconcerting at times; does Shawna really keep the phone’s video app open while she’s dealing with customers at the hotel, for instance? And seeing everything couched in IG Reels and stories leads to a bit of narrative confusion.

But through the stylized presentation, we can still see a pretty straightforward story of these two old friends reconnecting and taking on the music industry together. We enjoyed the chemistry Osman and KaMillion had with each other in the scenes where they were out drinking and then telling each other the unvarnished truth in that car. We can see the differences in their lives that led them to that point, but we also like the fact that they’re going to band together and take on the still-sexist music industry.

It’ll be interesting to see their diverging views on what they’ll need to do to get ears on their music. Shawna will still likely resist objectifying herself, while we know that Mia has already had to do that in order to provide for her daughter. There are other factors at play with the two of them, like Cliff (Devon Terrell), Shawna’s boyfriend who’s a law student in New York, and Chastity (Jonica Booth), who claims to be a talent manager but just hangs around the hotel lobby trying to snare famous guests.

In other words, Rae and the other writers have built a world around Shawna and Mia that will help them at turns and hinder them at others. But the newly restarted friendship between the two will be at the core of this series, and we’re liking what we see so far.