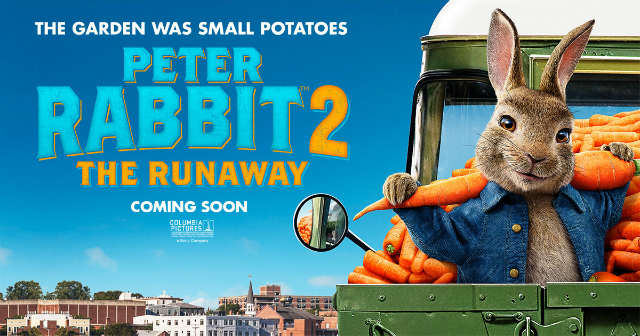 Writers: Beatrix Potter (based on the characters and tales of “Peter Rabbit” by), Will Gluck (screenplay)

Beatrix Potter’s Peter Rabbit books are childhood nostalgia for generations of children, myself included. When the 2018 live-action/CGI film happened, many were less than pleased. I’m not a purist but nonetheless found it off-putting and annoying (my trip to the theater was brought on by my desire to see if the allergy controversy was true; it was). But the movie made bank and a sequel was announced. I’d seen the trailer many times at the cinema and was growing increasingly irritated with it.

Some time after the events of its predecessor, Bea and Thomas are wed, and Bea receives a publishing offer from a major company. But the publisher’s ideas include painting Peter as a “bad seed”, which Peter himself doesn’t take too kindly to. While roaming London, he encounters Barnabas, a rabbit who claims to have known Peter’s late father, and Peter becomes involved in a citywide criminal ring.

A lot of what made this sequel better than the first is the frequent fourth wall leaning, lampshading, humor and performances. The story is as predictable as can be, slapstick cartoon violence abound, and there are many spots where the scene seems shoehorned in in order to pad the 83-minute runtime (not counting credits). Rose Byrne and Domhnall Gleeson are as pleasant as ever, with the ensemble voice cast a delight, even James Corden, who I normally have limited patience for. If you’re looking for passable family fun, Peter Rabbit 2 is your best go right now.