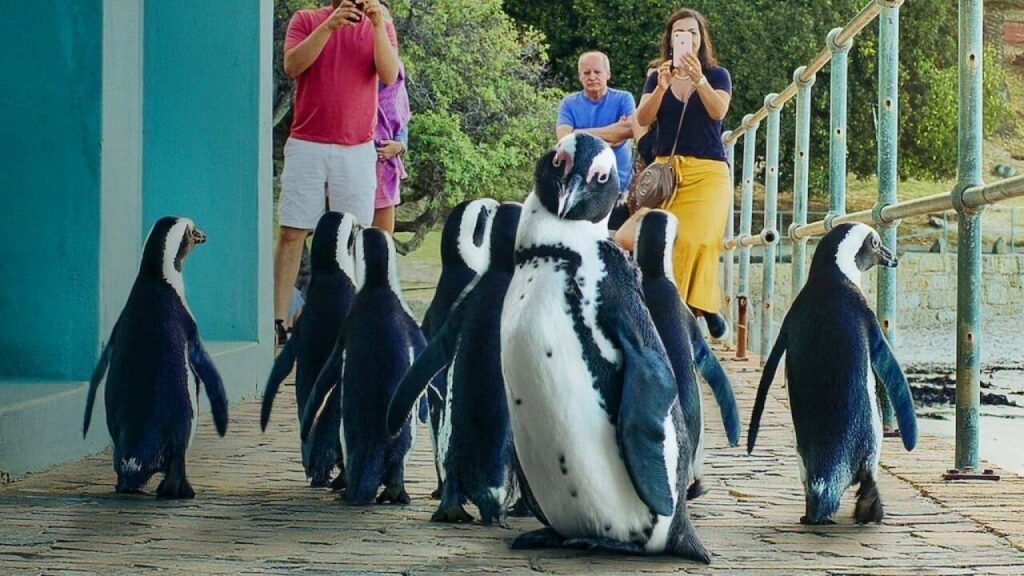 “Six hot months! One wild colony! No rules!” With this reality show-esque tagline, Netflix’s Penguin Town appears to be a quirky, comical twist on nature docuseries. They even pulled in comedian Patton Oswalt to narrate. Penguin Town follows the adventures of a wild cast of African penguins. As the series progresses however, dramatic events unfold, pulling the audience in for an emotional trip alongside the endangered birds.

The series follows the journey of African penguins as they hit land on the shores of Simon’s Town, South Africa. Here the birds live it up amongst the “giants” (aka humans) of the town, molting their feathers, hooking up with their mates, and hopefully raising some hatchlings before they depart. This may sound like spring break for penguins, but their time at the beach is anything but a vacation. These penguins fight off predators on land and in the sea, attempt to survive catastrophic weather events, all in the hope their species will survive and thrive.

Penguin Town captures the journey of these fascinating birds with fun camera technique and placement. They hide cameras in their nests to get up close to the hatching. They’re diving into the ocean with a “raft” (that’s a group of penguins in water) as our birds hunt for food and evade predators like great white sharks and seals. At one point they strapped a camera to an actual penguin to get an almost virtual reality experience of swimming. When following the penguins on land, the camera waddles in a similar movement. Overall, it’s standard filmmaking, but there’s a lighthearted quality that helps welcome us into the world of these quirky birds.

The cast of penguins could rival any of the more common-fare reality show. There’s a steady couple The Bougainvilleas – they’ve been mating together for years, waddling straight to their home under an African bush. There’s The Culverts, a new couple, who struggle to find a home that’s egg friendly. The Courtyards are the posh penguins, making their home in a lush garden in a fabulous estate. Most importantly, the couples share equal time incubating the eggs, trading off between hunting for fish and returning to the nest. Perhaps we “giants” should take notes on progressive parenting from these tuxedo birds.

The star bird of the show is penguin Junior, a youngster who has his fair share of obstacles. He’s rescued when he fails to molt and is whisked off to a rehab where it’s discovered he has some seal bites that are trying to heal. Junior’s the strapping young hero of the show, and his hero’s journey will melt anyone’s heart.

Penguin Town is narrated by Patton Oswalt. He’s a perfect narrator for this series, balancing the drama and the humor of the cast of birds. He rejoices when the Bougainvilleas hatch two eggs. He makes funs of the Car Park Penguins, a group of single “jackass” penguins who aggressively attack others in a car park. Oswalt also knows when to pull back, such as when speaking poignantly on Junior: “It’s hard to heal and grow new feathers at the same time.” Oswalt knows how to both land jokes and pull at heartstrings during sentimental moments in Penguin Town.

A fair warning on Penguin Town – there’s a reason the African penguin is endangered. Fighting off wild animals, humans, and mother nature takes a toll on some of our beloved cast of birds. The show has some dark moments, serving as a stark reminder that these birds, while comical at times, still face tough obstacles. Even with Covid lockdowns, the birds weren’t safe, because while humans stayed inside, wild animals and large predators overtook Simon’s Town. They persevered against the odds, and those who came out on the other end emerged stronger for it. For those who settle in to watch Penguin Town, be prepared to cry tears of joy and sadness for its lovable winged ensemble.