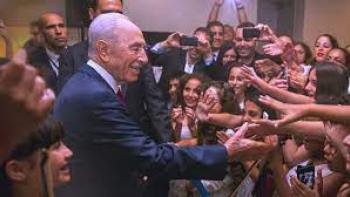 The documentary begins with a montage of interview clips before really picking up steam with its first chapter. After picking up the title card, the first few minutes are reminiscent of an idyllic fairy tale; Images of rolling hills and the lush Belarusian landscape with the sound of almost orchestral music in the background. It’s like a story that will introduce its folk hero protagonist, which would seem very fitting given the man portrayed in the film.

Never Stop Dreaming: The Life and Legacy of Shimon Peres examines the two elements that make up man – his life and what built it that would outlive him. His life will later cover his work as it was such a big part of what made Peres the man the world knew. The documentary goes to great lengths to shed light on the individual and his motives, and while it seems there is no doubt that much of what he has done, Peres has done with great conviction, believing so strongly I can’t help but feel that a slightly more balanced view would have been a nice thing to include. The film touches on the opposition he faced throughout his career and how he dealt with it, but we never really hear from any of the people who made up that opposition. If his dedication to the cause of building an Israel for the future was as great as is portrayed here, it would have been very interesting to see what Peres’s political opponents made of him, for although he was their opponents, he shone never to treat them as his enemies.

The film doesn’t move at a great pace. Considering the length of the documentary and also the life that its subject leads, the film offers a relatively small selection of interviews that does not offer a wide range of perspectives. They are also built around a narrative supported by archival footage and photos, with the interviews themselves acting more as a thread to weave them together than visual elements enhance the story being told by their narrators. While it’s clear that the documentary is intended as an educational celebration of Peres, I’m not sure how much effort has gone into really scratching beneath the surface of what’s essentially already out there if you look closely.

All in all, Never Stop Dreaming: The Life and Legacy of Shimon Peres appears to be a solid, albeit brief, introduction to Peres and his work for Israel. However, there is no denying that – like the history of any country – Israel’s past and all the people who played key roles in it is a huge subject, and as such I very much doubt that this documentary will be as in-depth as it just might be. There are times when it seems a little too romanticized and I doubt the contributions of so many Western leaders who don’t seem very balanced, but if you take it as a taster it probably isn’t that bad overall.