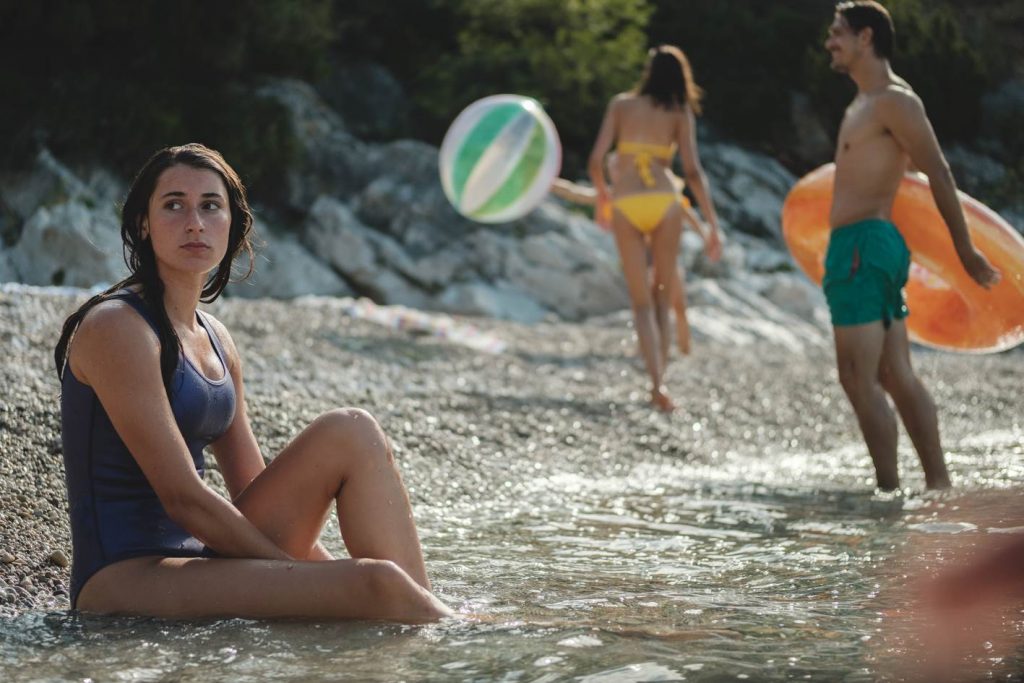 There are rocks just below the surface of the Adriatic where teenager Julija (Gracija Filipović) and her parents live, above a cove on the Croatian coast. At low tide these rocks are a jutting underbite, ready to chew chunks out of passing yachts. Julija’s overbearing father, Ante (Leon Lučev), knows this, but defiantly pilots his boat through anyway. Then he pushes his daughter overboard for questioning his decision.

It’s a telling moment in Antoneta Alamat Kusijanović’s sinewy family drama, in which threats to domestic equilibrium – Ante’s simmering anger, his wife Nela’s (Danica Curcic) secrets – lurk just out of view. Tensions are already high between Julija and her father: they dive to spear fish together in harmony, but are at loggerheads when they reach the land. The discord is amplified by the arrival of Javi (Cliff Curtis), a wealthy friend of the family. The atmosphere, of sun and celebration, rings as hollow as the Europop that Ante blasts to drown out arguments; sonar-stabs of cello on the score sound a warning.

Though teenage Julija (Gracija Filipović) lives in an island paradise with her family, her life is anything but tranquil. She and her mother, Nela (Danica Čurčić), live under the shadow of her short-tempered father, Ante (Leon Lučev). He likes to demonstrate his control over them with anger and violence. However, when Javier (Cliff Curtis), an old friend of Ante’s, arrives to discuss a business deal, Julija is given a glimpse of a different life. She and her mother seem truly happy for the first time in a long while, but their happiness leads to mounting tension between them and Ante. This could be Julija’s only chance to escape before the situation becomes volatile.

Writer-director Antoneta Alamat Kusijanovic weaves a fiery feminist tale of one woman’s pursuit of liberation in her feature debut. Filipović gives a powerfully nuanced performance as the youngster at this pivotal point of realisation in her life. Her father’s toxic behaviour has been the cage that’s kept her in line all these years, and Lučev’s domineering and sometimes even frightening screen presence is all viewers need to understand the domestic situation. It’s through this central conflict that the filmmaker effectively explores concepts of masculinity, power and freedom.

Slowly, the antagonism between father and daughter begins to intensify. Ante’s behaviour becomes increasingly controlling, whilst Julija becomes bolder in her actions as she becomes more confident in herself. Kusijanovic drops plenty of hints throughout the visit that something is going to snap when this conflict reaches breaking point. But what viewers won’t expect is the genuinely harrowing turn the climax takes when it eventually comes. And amid the shock and soul-crushing disappointment that comprises the final act, there’s nevertheless a sense of overwhelming catharsis that accompanies the finale, underscoring the emotional scope the director succeeds in capturing.