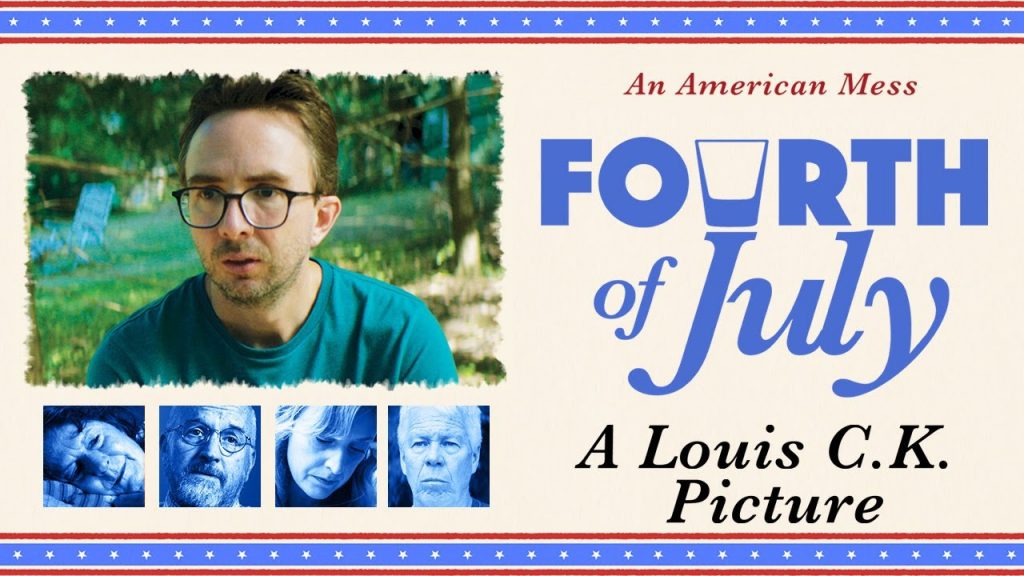 “Fourth of July” is a movie directed by Louis C.K., and in its light-spirited and unimportant way it comes at the audience as a kind of moral curveball. Starting less than a year after Nov. 2017, when five women came forward to describe inappropriate conduct by Louis C.K., including instances in which he masturbated in front of them (accusations he did not deny), the comedian, actor, screenwriter, and director has been working to revive his career, kicking off his attempted rehabilitation with an appearance at the Comedy Cellar in New York on Aug. 26, 2018. The arena of stand-up comedy, with its personal and confessional dimensions, presents an obvious way for someone like Louis C.K. to advertise himself, in the wake of his #MeToo downfall, as an entertainer who is still viable. (He won a Grammy for his 2020 comedy album “Sincerely Louis C.K.”) In that sense, all he needs is a nightclub willing to host him and fans willing to show up.

The arena of filmmaking is trickier. In Sept. 2017, two months before the scandal that toppled him, Louis C.K. appeared at the Toronto Film Festival to premiere the third feature he had directed (after “Tomorrow Night” and the cult blaxploitation satire “Pootie Tang”). It was called “I love You, Daddy,” and it was an oddity and a squirmfest — a dramatic comedy, shot to look like Woody Allen’s “Manhattan,” about fathers and daughters, older men and younger women, and a celebrity filmmaker, played by John Malkovich, who thinks he’s entitled to do whatever he wants, a point-of-view the movie never really dissects or questions. Even before the scandal, the film was problematic, and it was buried before it could be released.

“Fourth of July,” by contrast, is a movie that seems to have been designed to showcase Louis C.K. on his best behavior. It’s not a taboo-tweaking sex comedy. It’s more of a millennial indie trifle about a whimsically neurotic New York dude trying to come to terms with his problematic family. The movie is much better than “I Love You, Daddy,” and on the surface it seems like an attempt to deflect our attention away from the scandal, with Louis C.K. saying, in essence, “Forget what I did back then. Look, I can do this!” The funny thing is, if you look closely enough at it, “Fourth of July” actually does make a comment on the scandal, though a side-eyed and oblique one.

The film’s star, Joe List, is a stand-up comedian who has opened for Louis C.K. (he’s a regular at the Comedy Cellar), and the two of them wrote the script together. List plays a fellow named Jeff who lives in New York City and seems to have a pretty good life. He’s a jazz pianist, and when we listen in on the bebop stylings of one of his club gigs, it’s clear he’s got talent. He’s married to Beth (played by Sarah Tollemache, List’s real-life partner), and the two still act like cuddly bohemians out of an old mumblecore comedy. He’s also a recovering alcoholic, coming up on three years of sobriety, and he seems to have a solid relationship with his sponsor, Bill (Bill Scheft), and with the whole idea of having left the drinking life behind.

Yet Jeff has the look, and temperament, of a deeply anxious geek. Early on, he’s so convinced there’s something amiss with his jaw that he demands an X-ray and an MRI, even though the doctor insists there’s nothing wrong with him. This is mostly shtick, though. The more we look at Jeff, the more we see that in his big-spectacled Poindexter way he’s kind of endearing, like an owlish version of John Cusack. Jeff’s therapist (played by Louis C.K.) seems, more than anything, amused by his client’s problems.

Jeff and Beth are planning their annual pilgrimage to Maine to spend the Fourth of July with Jeff’s clan, and the prospect of this ritual visit is causing Jeff’s anguish to spike. It seems he’s got some major issue with his family. And this is the year he’s going to call them out on it. Half an hour into the 90-minute movie, Jeff shows up, all by himself (he has decided to do the family visit solo), at his parents’ lovely, wood-plank home nestled in gorgeous green Maine mountain country. From that point on, “Fourth of July” turns into a sitcom riff on “August: Osage County” — a family truth-game saga in which Jeff will confront his folks, along with all the aunts and uncles and cousins who have gathered.

What’s the problem with them? Simply put, they’re a bunch of insensitive louts. They’re big drinkers and big talkers, speaking in broad New England accents, and their basic mode of conversation is taking the piss, busting balls — name your metaphor for saying not nice things as a pushy “joke.” The worst offender is Uncle Kevin (Nick Di Paolo), a 50ish tattooed jerk with an aggro quip for every occasion. What strikes us most about these people is how different they are from Jeff. They’re the Maine version of Middle American philistine cads. (Politics is never mentioned, but if it were I can guess who they would vote for.) They have no patience for Jeff’s hoity-toity piano playing, his therapy, his AA. They think all that stuff is for wusses. They don’t respect his decision to quit drinking; they think it makes him a fraud. They keep ribbing him for being too New York.

It’s not as if this kind of culture war doesn’t play out in some families. It does. Yet as you watch “Fourth of July,” Jeff may strike you as such a sweetly polite and refined intellectual dork that it really is a little counterintuitive to imagine that he came out of this clan. That said, the way the movie is scripted, the things Jeff’s family members say that hit us like red flags are their tribal racism and their viciously intolerant language. Uncle Kevin calls Jeff’s piano playing “Liberace faggot shit.” And when one of the cousins brings a friend for the weekend, a biracial woman whose husband recently died, her race becomes such a focal point of attention that we think, Do these people see anything else about her?

There’s some major dysfunction in the family, like the blithe way Uncle Mark (Chris Walsh) talks about stealing copper from the plumbing store he once worked at. As presented, though, the truly glaring thing about Jeff’s family members is how…incorrect they are. We’re meant to disapprove. Yet this, in fact, is the defensive strategic seed Louis C.K. has planted.

Jeff’s real problem, we learn just before the trip, is that Beth desperately wants to have a child, but she may have waited too long — and the reason that happened is that Jeff didn’t feel like he was daddy material. We look at him and think, “Nonsense.” He’d obviously be a good dad. He’s just scared; he needs to grow up. But he’s blaming his family dysfunction for his own conflicts. When the movie reaches its big blowout set piece, with Jeff saying “Fuck you” to everyone in sight (including his mother), he thinks he’s having a catharsis, but it’s really a tantrum in a teapot. This is the family he’s stuck with, and he’s not going to change them.

To which you might say, “Duh.” But Louis C.K. has set the audience up to judge these people for the rude, crude, defiantly “unwoke” things they say. And he puts us on Jeff’s side only to reveal the real message: that they’re still got big hearts. That’s the indie version of a Hallmark sentiment, and “Fourth of July” ends with a hug. So you might think: Is that the point? Why did Jeff have such a bug up his ass about his family in the first place?

The real answer to that is that the objection he had to his family is the film’s metaphor for holding overly harsh judgments of unenlightened behavior. Sound familiar? “Fourth of July” is a trifle, and a facile, easy-to-watch one. But what it’s offering under the surface feels, in part, like a clandestine defense of Louis C.K.’s transgressions. In about 45 minutes, the family swings from being louts to saints. That’s supposed to be a lesson to us all. It’s not a convincing one.