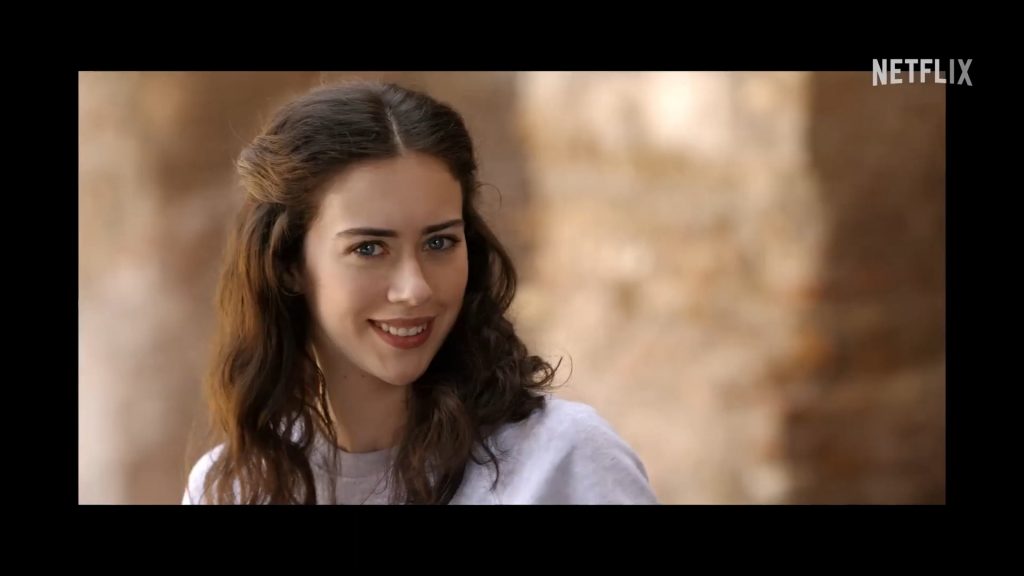 We open with Lina voiceovering (voicing over?) her mother’s funeral. Mom was sick for a long time, and now she’s gone, buried in a pumpkin spice-colored coffin. It was her favorite color. Fleetwood Mac was her favorite band, so Fleetwood Zach sang at the service. Who knew death could be so wacky? Wouldn’t want to bring us all down mere minutes into the movie. Mom and Lina had planned a trip to Rome to celebrate Lina’s high school graduation. Now Lina follows her Mom’s dying wish that she go by herself, mirroring Mom’s trip from a couple decades prior. This is a good thing, because otherwise we’d have to spend the entire movie with Lina’s incredibly annoying BFF Addie (Anjelika Washington), who’s really good at photoshopping fake backgrounds into her social media posts, so she looks like a world traveler. What a jokester!

Some things you should know about Lina before we get to Italy: She doesn’t know who her father is. After Italy, she’ll attend MIT. And she spent her high school years going to “debate parties,” studying her ass off for AP exams and taking care of her mother. Her love life suffered mightily – “What was I supposed to do, bring a date to chemo?” she cracks. She stuffs her suitcase with books and gets on the plane and gets off in Rome with a gumpy neck pillow and frumpy sweatshirt and crooked glasses, just a total flumpmeister general. She’ll stay with her mother’s old friend Francesca (Valentina Lodovini), who’s committed to ensuring Lina loosens up, looks great and makes the most of her vacay. First things first, Francesca sez Lina’s glasses gotta go, and thus begins what one presumes to be her Incredibly Blurry Roman Summer, because she never puts them back on.

Then again, who needs to see clearly when there are young men to look at? One is Alessandro (Saul Nanni), who has the piercing blue eyes of the son of a financier with a fleet of Ferraris and a dictum that his offspring attend Harvard and follow in his footsteps, or else. The other is Lorenzo (Tobia De Angelis), a much more humble gent with curly hair and high hopes of becoming a highfalutin chef. Alessandro takes her to the fanciest opera ever. Lorenzo takes her to a secret bakery to get THE most amazing pastries. Complications: Alessandro is a womanizer who says Lina is different. Lorenzo has a territorial girlfriend who races motorcycles, but she’s leaving at the end of the summer, so that’s pretty much kaputskies. Other plot clutter includes: Lina acquiring her mom’s diary, which is full of revelatory things, and gives her something to read instead of all the fancy book-learnin’ books. And a character (Owen McDonnell) who might hold the answer to Lina’s paternity. But wayyyyy more importantly, which boy will she choose? The one with the money or the one who can make to-die-for gelato?

Love and Gelato is essentially a made-for-TV movie with the occasional utterance of the word “shit.” “Clean and wholesome,” my [pauses for comedic effect] tuckus! The story never strays from the well-trod plot paths of hundreds of coming-of-age rom-coms before it, teen, clean, um, unclean, or otherwise. I mean, what’s a young woman who’s never taken any risks in her life supposed to do in Italy besides learn all her mother’s not even remotely scandalous secrets and possibly find her long-lost father and kiss delizioso hot boys and eat delizioso hot food? We’ve already established this isn’t the type of movie in which she’d kiss delizioso hot food and eat delizioso hot boys, and this is the last time I’ll poke fun at the whole “clean and wholesome” thing, promise.

Writer/director Brandon Camp shows no desire to do anything but fulfill expectations, to make us chuckle a couple times and maybe tear up a little along the way. Its drama could be deepened by even the slightest nod towards Lina’s grief in the wake of her mother’s passing, but death is treated like just another catalyst for plot development. Its attempts at comedy snap like overcooked linguine – “Why are you standing there like a boiled potato?” is Camp’s best stab at clever dialogue. The movie’s hull bounces on the rough waters of choppy editing before eventually smoothing out (the first act feels like it’s missing scenes, or else some were cut out to hasten our arrival in Italy); it also doesn’t seem to have the time for the simple pleasures of succulent postcard photography, a staple of movies like this. Without the sincere performances of Skaggs, De Angelis and McDonnell grounding it, the movie would pass unmemorably like scenery on the Ohio Turnpike. A once-in-a-lifetime trip to Italy deserves better.