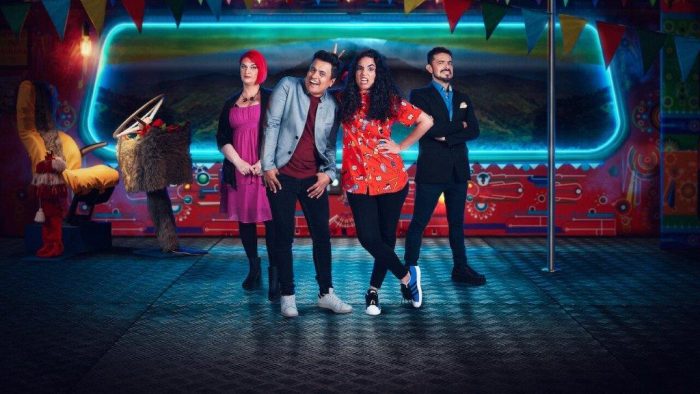 Being stuck indoors during a pandemic has everyone rightfully bored out of their minds. If you have been craving to go back outside and do normal fun activities, we don’t blame you. It’s been a while since we have all been able to comfortably get out there and chill. Although we can’t make weekend plans just yet, there is still one way to make the most of your time at home, tune in to Netflix’s ‘Locombianos’. This is sure to chase your indoor blues away and have you in splits.

In case you are looking for other comedy shows or sets to check out, you might want to consider ‘Soy Rada: Serendipity’, ‘Trippin With The Kandasamys’ and ‘Master of None’.

If you have been craving to get back to a time where we weren’t all stuck indoors, then tune in to Netflix’s ‘Locombianos’, as four comedians take on the stage and are sure to have the audience in splits. As per the official synopsis of the show: “Four of Colombia’s funniest and bawdiest comedians perform before a post-quarantine audience hungry for their stories.”

Freddy Beltran is an actor and a comedian. He has a degree in performing arts from the National Pedagogical University of Colombia. He began his career on the TV show ‘Los comediantes de la noche 4’. His other works include ‘La Sopa Colombia 6 and ‘You don’t know who I am?’

Born Diego Andrés Camargo Rueda, he is a comedian, television presenter, broadcaster, television director and an actor. He studied TV script at the International School of Film and Television in San Antonio de los Baños, Cuba and later studied Assembly of Film at the School of Cinematography and Audiovisual of the Community of Madrid. His works include ‘Los Comediantes de la Noche’, ‘The Suso’s Show’ and ‘No Soy yo… ¡Es tú!’

The trailer features Freddy Beltra, Deigo Camargo, Catalina Guzman and Pamela Ospina, all doing what they do best — leaving the audience rolling with laughter. The comedy set features the four comedians talking about their hilarious post-quarantine experiences that will definitely tickle you.