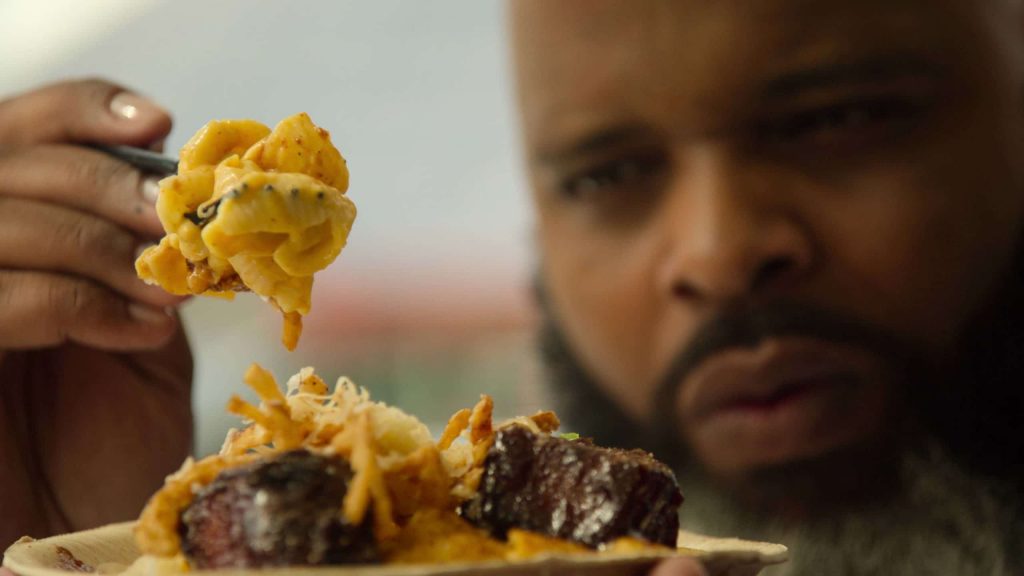 In St. Louis, YouTube star and food critic Daym Drops plays bocce ball with the owner of Zia’s On The Hill.

In Fresh, Fried And Crispy, Daym travels the U.S., looking for the best fried dishes out there. What he tries to do in each city is not only try the traditional fried item that you would find in that city or region, plus some unexpected dishes from restaurants that are recommended to him. Each time he tries a dish, his reactions are given the super-passionate Daym Drops treatment.

Daym tries T-Ravs (toasted ravioli), one of the city’s signature dishes, and finds out how “The Hill” has been an Italian enclave in the city for decades. He then goes to a vegan restaurant and tries a friend buffalo “chick’n” sandwich. He’s truly surprised at how the vegan “chick’n” patty is, despite his protestations to the restaurant owner about his aversion to vegetables.

Daym then goes to the home of a local chef who makes country-fried venison and T-ravs with beaver meat in them. Finally, that chef shows him how he smokes his own bologna, and puts a thick, pan-friend slice of it on a sandwich with a fried egg and all sorts of drippy, gooey goodness. Daym is so enraptured with the sandwich that he sings its praises with pieces of it trapped in his beard.

When we watch a food show, we’re as interested in the food, the history of it, and how the chef came to specialize in certain dishes as we are in watching someone get all orgasmic over taking a massive bite of a dish. Unfortunately, Fresh, Fried And Crispy has a lot of the latter and not a lot of the former.

The show is trying to take advantage of Daym’s persona in his YouTube videos, which at this point is probably partially an act — though he truly loves fast food, to the point where he has videos talking about how his doctor wants him to stop eating it. Calling him a “food critic” is somewhat generous; he’s more of a “food vlogger”, which is fine. He doesn’t need to be critical of the food he’s eating on this show. But, aside from his outsized reactions to these dishes, there’s nothing on this show that you can’t find on a zillion cable shows that have been created in the 14 years since Fieri’s “Triple D” debuted.

We wanted to hear more about “The Hill,” which we previously knew was the birthplace of Yogi Berra; a little more information on the history of Italian-Americans in the middle of the country would have been welcomed. Also, a bit more information on the vegan restaurant, which seems to be doing well in a very meat-and-potatoes city, would have been fun. But in a lot of cases, Daym’s histrionics overwhelms any personality the chefs and restaurant owners might bring to the show.

To come back to Fieri: Even though his “Flavortown” act is pure shtick, he knows to let the chefs and the food shine. It’s because he’s a chef, and knows how hard these chefs and owners work to create dishes made from scratch and maintain a following for years or decades. Daym is there to eat, and because he’s not a chef or at least a restaurant owner, his appreciation of the effort these chefs put in is different. Not better or worse, but different. Because of that, his concentration is on how he reacts to the food, and the vision of these chefs standing silently next to him while he breaks down everything he likes, then gets into his shtick gets old quickly.