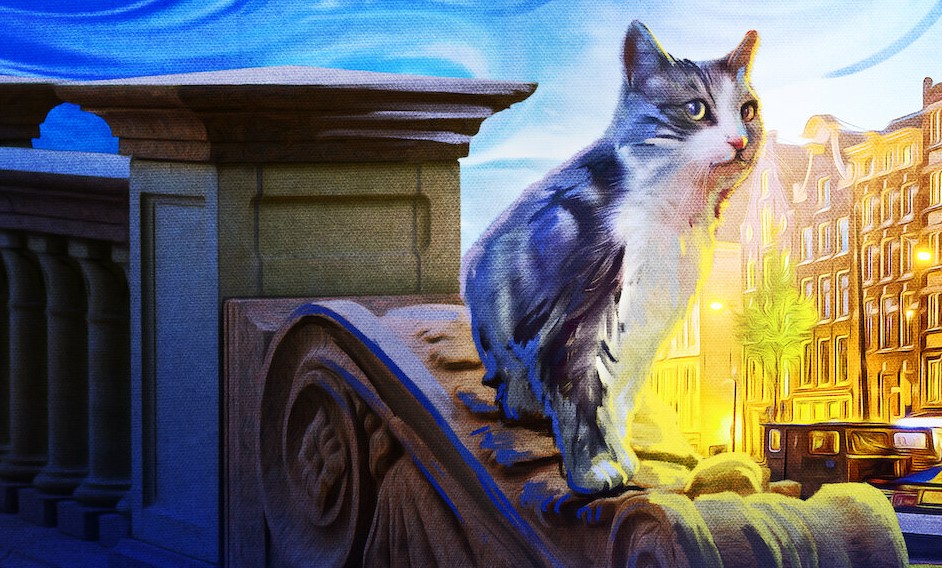 If you have used the internet for any amount of time, there’s a good chance you’ve seen a handful of viral videos showing cats up to their old shenanigans. Kitty Love: An Homage to Cats turns this phenomenon into an hour-long documentary “narrated” by Abatutu, “the most famous cat in The Netherlands”. Abatutu is a model and an actor of both stage and screen, apparently the first cat to ever receive a lifetime achievement award, and often referred to as “the George Clooney of the cat world”. Abatutu’s owner runs something of a feline casting agency (or.. cats-ing agency…) where other cats get a shot in the spotlight, but Abatutu remains the biggest star.

Over the course of Kitty Love‘s hour, we see various montages of footage sent in from cat owners. Each segment has a theme: there’s “cats and water”, which sees the animals chase the stream from a hose, drink from buckets, and bat their paws at bubbles and bath water, in addition to other aquatic antics, “cats and kids”, “cats and music”, where they mess with record players and “play” guitar and piano, “cats and dogs”, where they make digs at their nemeses, and “cats and food”, among others. These clips and some personal time spent with Abatutu and other performing cats are what make up the entirety of Kitty Love.

It is a wonder to me how Kitty Love: An Homage to Cats wound up on Netflix. This isn’t to say that it’s offensively bad or painful to watch; on the contrary, it’s pretty harmless, and might serve as a good way to occupy your kids in front of the TV for a short amount of time. But it is so deeply unremarkable and so corny that it’s almost impossible to differentiate it from a “best of” compilation of cat clips on YouTube, even with the help of celebrity cat Abatutu. I’ll admit that I’m more of a dog person with the ability to appreciate a good cat video now and then, but Kitty Love feels like a B- or C-tier Animal Planet production they might air during an unimportant slot just to fill the time.

Between the corny music, infantile narration, and lack of any real story to tell, the existence of Kitty Love: An Homage to Cats almost irks me, even with its heart clearly in the right place. I would watch a full-length documentary about the rise of Abatutu and the animal actor industry, because there’s something genuinely interesting there. And he’s a charismatic cat! But expecting viewers to understand this cat’s importance with very little context and filling up an hour with cat clips feels like lazy filmmaking, and one can’t help but wonder why Kitty Love exists at all.