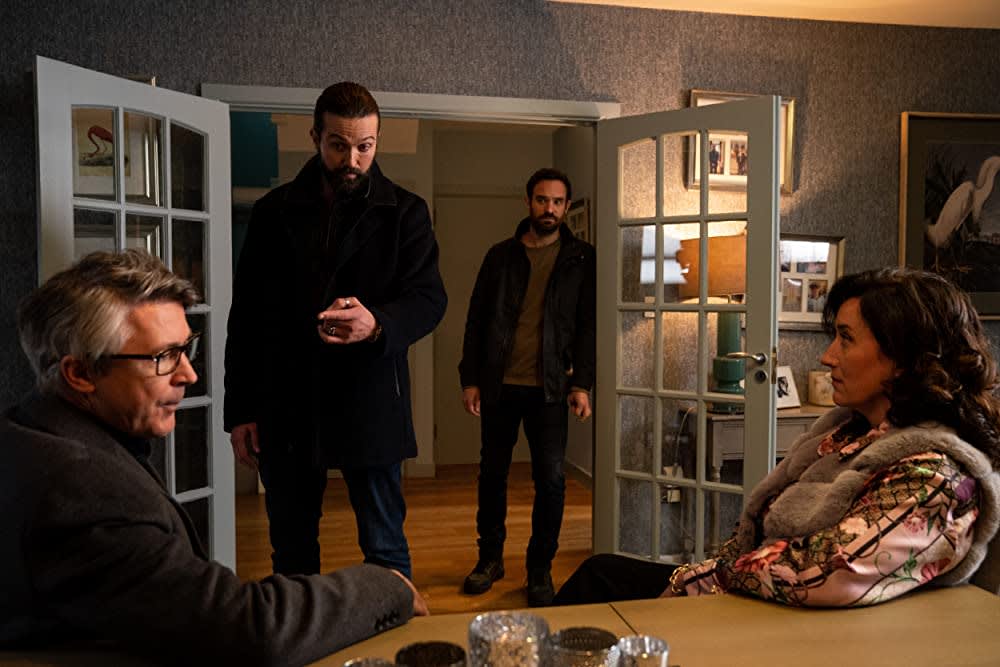 The Love/Hate comparisons are difficult to get away from, but at least a powerful ending to the first episode will bring viewers back for more.

The symbolism is clear as the first episode of Kin opens with a curly-mopped teenager buying sweets in Temple Bar before hopping on the pillion of a bike which zooms him through Dublin to carry out a hit. It captures the now commonplace nature of gangland violence along with the loss of innocence that goes with the territory.

The name of the show, which could also be seen as a nod to one real-life current crime gang, refers to the Kinsella family, and also the blood ties that bind them together.

Comparisons with the acclaimed Love/Hate will be inevitable, especially given the presence of Aidan Gillen, who played John Boy in that show, as crime godfather Frank. Here, as he goes to meet another crime boss Eamon (Ciarán Hinds) in a sleek rooftop restaurant, he looks more like a management accountant than a gangster.

It’s a somewhat downbeat performance from Gillen, but one suspects his character’s vicious side will come more to the fore as the show progresses.

The star power is provided by Charlie Cox of Marvel fame who plays Mikey Kinsella, Frank’s nephew, recently released from the ‘Joy’. He is trying to go straight but just like his namesake in The Godfather, just when he thought he was out, they pull him back in.

Also feeling the pressure is Mikey’s sister-in-law Amanda — a convincing turn from rising star Clare Dunne — a coke-snorting, money-laundering mum who hassles her son to fill out his CAO form. Maria Doyle Kennedy stars as Aunt Birdy, who would appear to be a similar steely character in the vein of Peaky Blinders’ Aunt Polly, played so memorably by Helen McCrory.

Much of the action takes place in the gentrified Docklands — Amanda and Jimmy’s swanky abode is in the shadow of the Aviva Stadium — away from the usual milieu of suburban estates, and the lines between ‘legit’ business and otherwise are duly blurred.

Skilfully shot, and with a soundtrack from the legendary DJ/producer David Holmes, it is a stylish production but overall it lacks cohesion, and the tension and rawness that made Love/Hate so compelling.

However, the episode builds to a powerful ending that hopefully promises more substance and less style.