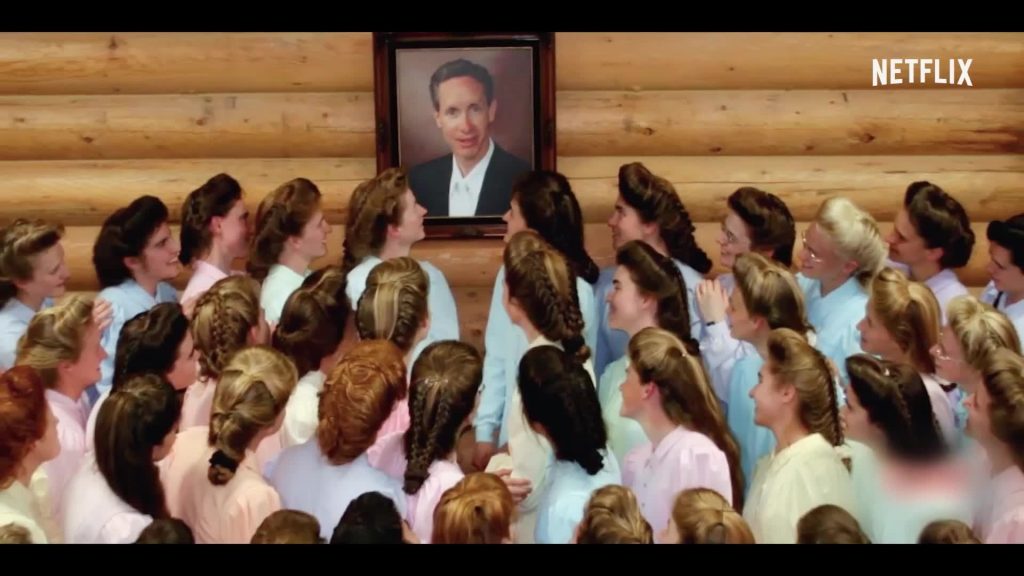 The brand new Netflix true-crime series is a four-part docuseries titled, Keep Sweet: Pray and Obey. It puts the spotlight on Warren Jeffs, the tainted leader of a polygamist cult called the Fundamentalist Church of Jesus Christ of Latter-Day Saints (FLDS Church), an offshoot of the Mormon Church. The FLDS, under the self-professed Prophet, subscribed to polygamy and forced marriages of underage girls while cloaking itself in the garb of religious righteousness and salvation. The documentary, directed by Rachel Dretzin, tells the story of Warren and FLDS through the perspective of the survivors, especially the women who escaped the life that was preordained for them.

“Even though I grew up in the United States, we knew we were different…And, in my family, and in the culture I grew up in, I was taught that we were the one and only true people of God on the whole face of the Earth. And we believed in polygamy,” says Rebecca Wall, who was married off to Rulon Jeff, Warren’s father and predecessor, at the age of 19. He was 85 then. Rulon, who was known as Uncle Rulon among his followers, headed the FLDS and had absolute control over the lives of his followers. ‘Keep Sweet…No Matter What’ was the motto he stood by and it was generally aimed at the girls within the community so that they didn’t display any anger or resentment towards their fathers and husbands. At the time of his death, at the age of 92, he had 65 wives and had fathered over 60 children, Warren being one among them.

By the second half of the first episode, the screenplay shifts its focus to Warren. After Rulon’s death, Warren manipulated the followers into believing that he was the next Prophet, and took charge as president of the FLDS. And in the second and third episodes, we learn that he was more evil and corrupt than his father ever was. He married some of his father’s young widows, separated men who doubted his authority from their families, facilitated the marriage of underage girls to older men, and brought everything under the control of FLDS, including the businesses of his followers. He imposed new restrictions on clothing — denim wasn’t allowed, the colour red was prohibited, and women were supposed to wear pastel colour outfits and specific undergarments. Most of these restrictions were targeted toward women.

However, Warren’s depravity and control did not end there. Elissa Wall, Rebecca’s sister, was only 14 years old when she was married off to her 19-year-old first cousin. Although she tried to resist, Warren ignored her pleas. She was only one among the many minor girls who were forcefully married off to Warren’s ‘loyalists’. But when journalists and law enforcement began to track Warren’s activities, he shifted his base from Short Creek in Utah to Eldorado in Texas. And as the narrative progresses, more harrowing and disturbing facts about Warren and the FLDS are brought forward.

It took Elissa several years to escape from the clutches of the cult and find the courage to speak against Warren. On further investigation, it was revealed that Warren had married and sexually abused two minor girls, aged 12 and 15. Following the case, Warren was sentenced to life in prison. At that time, he had 78 wives and 24 of them were underage.

The manner in which the creators have put together the story and fleshed out the details keeps us engaged till the very end. The interviews with survivors, journalists, and police officers, along with archival footage, the re-enactment of certain events, and the background music add value to the narrative. The screenplay also stresses the plight of women who were forced to submit themselves to their husbands and the Prophet in the name of salvation. And as viewers, we find ourselves sympathising with them.

“We were taught from birth that in order to get what they called the highest degree of the celestial kingdom, you had to have at least three wives while you lived on Earth,” says Wallace Jeffs, Warren’s brother. But when a producer asks him what happens to the women, he doesn’t have an answer. “That is kind of a grey area. We were never taught what a woman becomes on the other side other than a wife,” he adds.

Though the documentary excels in its portrayal of the gruesome crimes committed by Warren, crisper editing would have elevated the viewing experience to a great level. And there are areas where the pacing of the narrative is inconsistent. But the final scene supersedes any minor flaws in the docuseries.