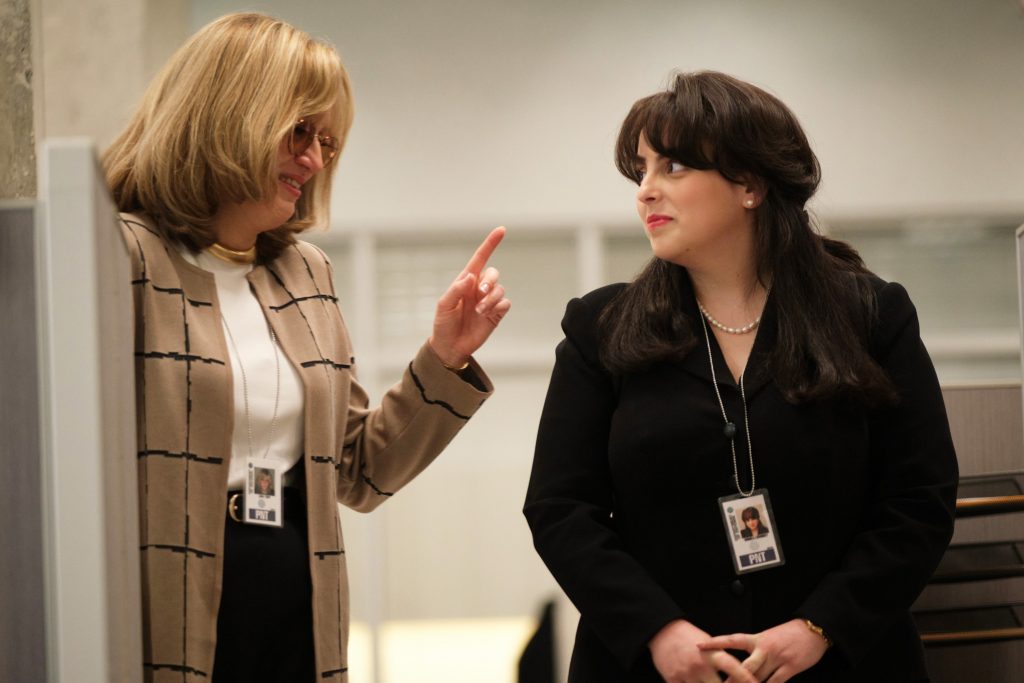 That’s the big question facing Impeachment, the long-awaited, long-delayed third entry under the ACS umbrella. Announced long before our previous White House occupant faced not one but two impeachment proceedings of his own, Impeachment instead focuses on President Bill Clinton’s legal showdown, spurred by his deceitful handling of an office affair with Monica Lewinsky, an employee (she was an intern) many years his junior and many ranks below his pay grade. In recent years, the real Lewinsky’s intelligence and insight, coupled with the ongoing reckoning of the #MeToo movement, has helped people see her in a more positive light than that of the joke she was all but universally derided as at the time. Will Impeachment help move that process along?

Directed by Murphy from a script by showrunner Sarah Burgess, the season’s opening episode (“Exiles”), surprisingly, does not center Lewinsky at all. After a preamble in which Monica is taken into custody by FBI agents working with special counsel Ken Starr, the story focuses squarely on her best friend turned nemesis, Linda Tripp, with the occasional detour into the world of Paula Jones, the most famous accuser regarding Bill Clinton’s history of sexual harassment and misconduct.

Played by Sarah Paulson under a mountain of prosthetics, wigs, and shoulder pads, Tripp is established early as a comedic villain. She chafes against the relaxed, déclassé office culture brought to the White House by President Bill Clinton (Clive Owen) and his Arkansas-heavy team. She lambasts First Lady Hillary Clinton for using the shared restroom, and simply for having an office of her own. She inflates her credentials, claiming to have worked for a military division so secret it doesn’t officially exist (“So, Delta Force?” asks her interlocutor; Tripp replies that she’s not at liberty to say.)

When her beloved boss Vince Foster (a memorable Matthew Floyd Miller) kills himself, ostensibly over the Whitewater real-estate scandal, Tripp immediately incorporates this into her own myth, telling everyone who’ll listen that she’s the last person to have seen him alive. When a reshuffle of the organizational structure sees her transferred out of the West Wing to a more lucrative but far less glamorous job at the Pentagon, she becomes the terror of her coworkers and nurses the grudge for years. She promises her former office friend Kathleen (Elizabeth Reaser), who Clinton made a pass at, that she’ll get even with her for keeping a West Wing job while Tripp herself lost hers—then she incorporates Kathleen’s story into her own, claiming she was transferred because Hillary was afraid Bill would be romantically interested in her. She’s a rotten plank in the foundation of the whole edifice.

And who should step on that plank but Monica Lewinsky (Beanie Feldstein), a fresh-faced ex–White House intern who winds up working in the same area of the Pentagon as Tripp. Desperate to be back near the center of the action, Tripp takes Lewinsky under her wing, warning her which colleagues are crazy or stupid or incompetent (to Tripp, that would be all of them) and wheedling details out of her regarding a secret relationship she’s been having with someone in power. This last tidbit is what Tripp needs to get back into the good graces of literary agent Lucianne Goldberg (everyone’s designated favorite character actor Margo Martindale), who’s been on the Clinton scandal beat for years but for whom Tripp has never produced anything sufficiently juicy. Thanks to Monica—who gets a private “how was your first day at work?” call from the enamored president to end the episode—the juicy stuff is finally on the way.

Sprinkled between all this is the parallel story of Paula Jones (Annaleigh Ashford), a hotel clerk whom the future president summoned to his room and exposed himself to back when he was governor of Arkansas. As the news of the incident begins to trickle up through the conservative medias sphere, she and her awful husband Steve (Taran Killam, doing an SNL bit, more or less) decide to demand an apology; when that fails, she sues, with a right-wing machine providing legal and financial support. She’s not portrayed as a useful idiot for the conservative movement, though—more just, well, an idiot, who realizes she’s been wronged but lacks the street smarts to see that she’s being used as a pawn by people who couldn’t care less if she was harassed or not.

Instead, we wind up with these Dick Tracy villain–looking iterations of Tripp and Jones and Clinton, like we’ve gone into some weird Hall of Presidential Scandals at a Disney theme park in the Uncanny Valley. What happened to the guy who, for example, cast Cuba Gooding Jr. as O.J. Simpson, a man he doesn’t resemble in the slightest, and counted on Gooding’s acting to seal the deal? I miss that Murphy. Bring him back! (Though to be fair, we seem to have gotten that Murphy in the brief cameo by Edie Falco as Hillary Clinton; Falco just looks like Falco with a Hillary haircut, and that’s perfectly fine!)

The second problem is how broadly drawn some of these characters are, in a way that feels alternately condescending and condemnatory. Linda Tripp may well have been a sociopathic social climber with delusions of grandeur. Paula Jones may well have been a naive country girl whose inexperience with sexuality and sexual harassment made her look like an easily discredited rube. The issue is that past iterations of American Crime Story dug into their characters’ heads in order to make their foibles understandable, even relatable. We sympathized with Andrew Cunanan—a very similar character to Tripp in terms of their reflexive fabulism and covetousness—because we learned what made him sad as we learned what made him so scary. Tripp, by contrast, comes across as a menacing asshole right from the get-go, and Jones is treated like Rose Nylund from The Golden Girls, a sweet doofus and nothing more.

The big exception here, of course, is Beanie Feldstein as Monica Lewinsky, the third person in the show’s triumvirate. Unencumbered with prosthetics, treated as a mixture of savvy and sympathetic, talking like a recognizable human being instead of an Office Space character or a Hee-Haw reject, she feels vibrant and real in a way that Tripp and Jones do not. Given that she has by far the most interesting and important role in the story, I take this all as a good sign that the more Monica we get, the better the show will be.