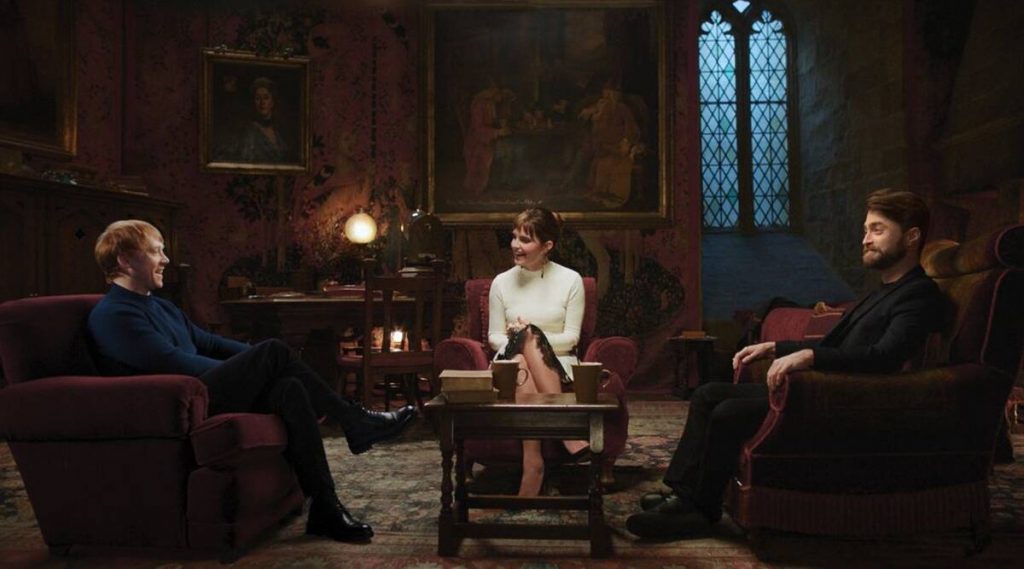 The John Williams score plays (with added bells for the festive season), the camera soars above an ersatz Victorian street, wax-sealed letters appear – and just like that, anyone who came of reading or viewing age from 1997 onwards is home. The Harry Potter reunion special Return to Hogwarts, marking 20 years since the first film adaptation of JK Rowling’s gamechanging and multi-multi-million-selling fantasy series about the boy wizard was released, hews as closely to the original’s aesthetic as possible from the off.

Chats among the three main stars, Daniel Radcliffe (Harry himself), Emma Watson (Hermione Granger) and Rupert Grint (Ron Weasley), take place in the Gryffindor common room, there’s an opening set piece in the Hogwarts dining hall, Radcliffe and director of the first two films, Chris Columbus, talk in Dumbledore’s office and so on. It provides a rush of nostalgia only heightened as the enduring affection among them all becomes evident. There is much – rising perilously if perhaps inevitably close to emetic levels – of the cast and crew being like a family. There always is in programmes like this, but at least here it is more than usually justified. The actors famously began working on the franchise when they were children, and their audience grew up alongside them pretty much in real time as the films were released between 2001 and 2011.

One of what you might assume to be a central member of the family, however, is conspicuous by her absence – the creator of Harry Potter and his world, the author JK Rowling. An essay she published in 2020 giving her views on the impact of gender ideology on women’s rights was widely denounced as transphobic. Radcliffe, Grint and Watson distanced themselves from her. According to her agents, the controversy played no part in her decision not to take part in the reunion and she felt that the 2019 interview footage of her used here (mostly recalling the difficulty of finding someone to play Harry) would be presence enough. Whatever the true degree of her choice in the matter, and despite various fond mentions of “Jo” from Radcliffe and others throughout the special, a void remains.

But around it there is charm, warmth, charisma – especially when Helena Bonham Carter (Bellatrix Lestrange) blows in like the world’s most glorious hurricane – and even a little new information amid well-worn anecdotes. Yes, we hear again how Alfonso Cuarón, who directed the third Potter film, made the central trio write essays about their characters and true to form, Watson handed in a perfect dozen pages, Radcliffe mustered half a side of A4 and Grint didn’t bother. But we also hear about Alan Rickman getting the inside line from Rowling early on about Snape’s ultimate motivation and telling not a soul, Watson’s growing loneliness as the pressures on her grew greater, and about the deep fondness between Watson and Tom Felton (Draco Malfoy) and the crush Radcliffe had on Bonham Carter. There are also moments of tangential insight, into the scale of the endeavour (such as when one of the three remembers being told that the casting announcement would be made that afternoon and that the media would descend – “So you can’t go home”), and Radcliffe’s maturity beyond his years from the start. He makes several references to watching the likes of Ralph Fiennes, Gary Oldman, Timothy Spall and many others from the British thespian firmament doing “proper acting”, and his longing to and delight in learning from them is still palpable.

It is a slick and calculated production, designed to give Potterheads exactly what they want, how they want it. But it contains enough untold stories and honesty from the participants and unfakeable camaraderie to give it more genuine heart than probably anyone expected. Perhaps in another 20 years they will let Rowling back in, too.