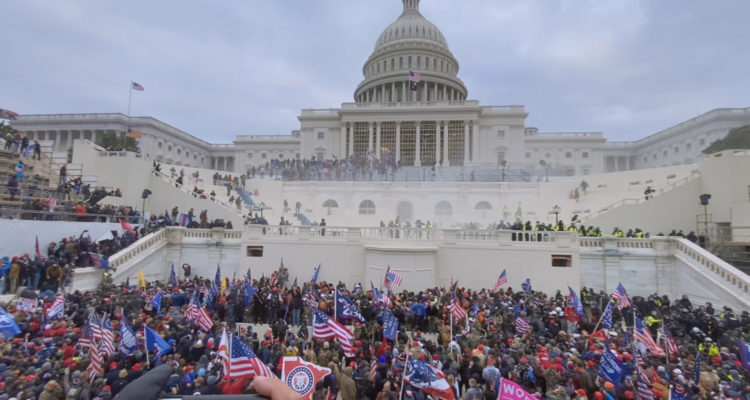 In the temporal wormhole that is pandemic life, the Jan. 6 attack on the Capitol by supporters of the eventually-twice-impeached 45th president of the United States feels like it was 20 years ago. And it also feels like it was yesterday.

Along those same lines, viewers of Jamie Roberts’ new HBO documentary, Four Hours at the Capitol, are likely either to think that the 88-minute film is arriving at exactly the right moment, as our visceral memories of the attempted insurrection might be fading and becoming selective, or that it’s far, far too soon.

Whatever societal need we might have for a timely reminder of something that occurred only 10 months ago — and certain politicians and pundits have made it their brand to say inaccurately that what happened on Jan. 6 was indistinguishable from protests in the summer of 2020 — it’s hard not to feel, when watching Four Hours at the Capitol, that on more than a few purely practical levels, this was not a documentary that could be made properly at this early a date. To use a wildly hyperbolic analogy, there’s a reason why Netflix routinely releases a dozen shows focusing on serial killers from the ’70s and ’80s, but no shows about currently active serial killers.

The conceit of Four Hours at the Capitol, which features Dan Reed (Leaving Neverland) among its executive producers, is that it’s an almost minute-by-minute examination of the events of Jan. 6, 2021 through the eyes of the people who were there. That means no historians or commentators, no celebrities expressing horror at what they witnessed on TV from their couches, no late-night pundits offering snarky levity.

There are the participants in the march/insurrection, including self-described members of the Proud Boys and Cowboys for Trump, but also self-described filmmakers and more professionally described journalists who sensed a story was unfolding that day and followed it.

There are the members of the Capitol police and the DC metro police, entrusted with protecting one of American democracy’s most sacred sites from vandals and marauders and protestors.

And then there are the politicians who were attempting to go through what would be, most election years, one of the dullest and most perfunctory parts of the process, the roll-call certification of electors.

It is the story seemingly presented from all sides, except — let’s be perfectly frank — you can’t have this story from all sides. Not now. There are hundreds of criminal cases pending and most people are not going to go on the record with an HBO documentarian about things that could get them sent to prison for years.

So Roberts has succeeded in telling a story about the Jan. 6 insurrection in which nobody is willing or able to say that they did anything especially illegal — even as the film dips into a nearly bottomless reservoir of footage of alleged protestors doing completely illegal things on that day. Everybody here is a participant and nobody here is an instigator and that can’t possibly be the story.

Roberts’ interview subjects admit to marching on the Capitol. They admit to filming the behavior from the Capitol. Heck, “activist filmmaker” Nick Alvear admits to lighting up a joint in the Capitol rotunda after an entry into the building that was clearly not legal. But given the relative nature of crimes committed that day, crimes in most cases transmitted directly onto social medial, there’s no reason why “smoking weed in the Capitol” should be a behavior marked by any shame.

But in terms of breaking down what happened once people were inside, Roberts has to leave that mostly to the various videographers and journalists who could narrate from the perspective of somebody covering a historic event — making them not even “participants” in that case.

Four Hours at the Capitol has no need for reenactments or filler imagery because every second was recorded by somebody, most by multiple people. The best part of the documentary is watching the intersections of different “storylines” — the way a police officer’s body-camera footage shows one perspective, a Capitol security camera shows another and people on the ground with their iPhones raised throughout the insurrection were able to capture the moment they were part of.

We see footage filmed by Huffington Post reporter Igor Bobic or Proud Boy Eddie Block and then we see Bobic and Block passing through other people’s footage. We hear legislators like Eric Swalwell or Chuck Schumer talking about the steps that had to be taken to get them to safety, passing close to the insurrectionists, and then we see that exact moment recorded from multiple perspectives.

The intercutting of the talking-head recollections from the insurrectionists — all amazingly calm and matter-of-fact about their presence and their motivations — with the footage of people yelling, swearing, bashing in windows, assaulting law enforcement and more is obviously meant to be Roberts’ own commentary on the situation, but it feels very passive.

Between opting not to fact-check any of the protestors’ motivations, which involve a variety of conspiracy theories and factual inaccuracies, and the lack of interview subjects capable of discussing the more advanced illegal activities that were featured in photographs and footage not included in the documentary, it feels almost soft. The people who got further into the Capitol, the people whose participation truly made Jan. 6 into one of the ugliest days in recent American history, are the people who can’t or wouldn’t be a part of this documentary.

Put a different way, this gives the impression of being a non-partisan and even-handed version of the story and the insurrectionists who appear in the documentary are likely to feel themselves very well-represented. It isn’t hard to know that if the police officers are telling stories of feeling like their lives were in danger and the protestors are exclusively remembering events that more closely resemble a leisurely stroll around national monuments, “both sides” isn’t a valid interpretation. Yet some people will easily accept the villains of the piece as heroes.

Those people mostly won’t watch this film anyway, but it’s easy to imagine weed-loving Alvear — given a platform here to ramble casually about how he supports Trump because of QAnon-flavored talking points — having a few friends over to watch the documentary with popcorn.

For various obstructionist reasons, there are things about Jan. 6 we simply don’t know yet and Roberts is unable to engage with those mysteries. Everybody agrees that there weren’t enough officers present that day, but Roberts’ decision to stick to people present at the Capitol — undercut by a half-baked attempt to acknowledge the suicides of multiple officers in the weeks and months after the insurrection — lets him avoid asking tough questions that nobody would tell a filmmaker anyway. The confusion of those present helps simulate the confusion of the day, but like everything else here, it’s only telling a corner of the story.

Even a corner of this nightmarish story is unsettling to watch and worthwhile purely to prevent that day from slipping into the ether. But there are too many inevitable gaps and exclusions to keep Four Hours at the Capitol from feeling essential.