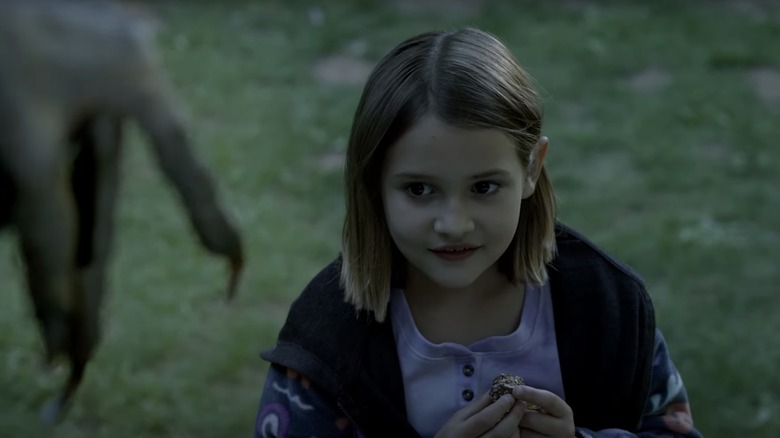 Ever heard the one about the mysterious girl who shows up in a small town, befriends the local misfits and then enlists their help battling the monsters creeping in through a gate to the underworld that’s been under the townspeople’s noses the whole time? It’s Buffy the Vampire Slayer, it’s Stranger Things, it’s (sorta, kinda) It — and now it’s also The Girl in the Woods, the latest original drama from Peacock. But where the others stood out thanks to their lovable characters, memorable monsters or shocking twists, The Girl in the Woods is, sadly, as generic as its title.

In this version of the story, the girl is Carrie (Stefanie Scott), who appears in a struggling Oregon mining town called West Pine. She’s just escaped from the Disciples of Dawn, a rural cult who claim to be the last line of defense between humankind and the demons that lie on the other side of an ancient door deep in the forest. Though she’s being chased by one of her own (Will Yun Lee), Carrie finds new friends in Nolan (Misha Osherovich) and Tasha (Sofia Bryant), local teens who dream of leaving West Pine for good.

The alliance comes not a moment too soon: Right around the time of Carrie’s arrival, Nolan’s young cousin (Lily Jane) becomes the first of several townspeople to go missing in what Carrie is sure is a monster attack.

The good-ish news about The Girl in the Woods is that there’s not much here to hate. The leads seem like sweet and caring kids — you know, exactly the sort to help a disheveled cult escapee in distress. The season is short, consisting of just eight episodes of around 30 minutes each, which keeps the plot moving at a reasonable clip. The second half contains a handful of genuinely creepy moments, like one involving a mirror and a monster that can only move when its victim can’t see it. And it is refreshing to see a series center itself around young queer leads as matter-of-factly as this one does. While Carrie’s heartbreak over a female ex or Nolan’s anxiety about their gender are treated with compassion and given plenty of room to breathe, they’re also just one aspect of the characters’ individual journeys.

But from start to finish, The Girl in the Woods feels like the fat-free version of all the other shows and movies it brings to mind. (Besides the ones named above, the show also gives off strong “post-Hunger Games adaptation of second-tier dystopian YA book series” vibes, particularly when it comes to the beige-clad Disciples of Dawn and their violent adolescent rites of passage.)

It’s easy to tell what the richer, more complex version of this idea is supposed to look like, and although The Girl in the Woods sometimes gets close enough to satisfy that craving for a few minutes here and there, it’s also easy to tell that this isn’t the real thing. The Girl in the Woods feels dulled in everything from its murky lighting and grayish color palette to its artless dialogue and clunky plot, the latter of which is so predictable that I didn’t even realize some of the big reveals were big reveals until after the fact.

Even Carrie herself feels bland, to the point where it’s not clear if a late-season personality change from shrinking violet to quippy action hero reflects growth on her part or inconsistency from the writers or both. Though Scott seems to throw herself into Carrie’s bouts of angst or badassery with equal enthusiasm, she can only do so much to make such an uneven character feel cohesive.

Osherovich and Bryant fare a bit better with characters who are allowed more levity and skepticism, as well as a fair bit of romantic chemistry. But none of the rest of the cast (which includes Reed Diamond and Leonard Roberts) gets enough to do to make an impression.

There’s simply nothing about The Girl in the Woods that feels entirely unique to The Girl in the Woods — nothing impressive or inventive or even infuriating enough to warrant another trip down a narrative path that’s too well trod already. The series aims to do as its first monster does, luring viewers with promises of excitement and then delivering just enough of the fantasy to keep us in a dazed stupor. But its magic proves too weak to maintain even the illusion of satisfaction. It’s a show that’s easier to forget than it is to remember.