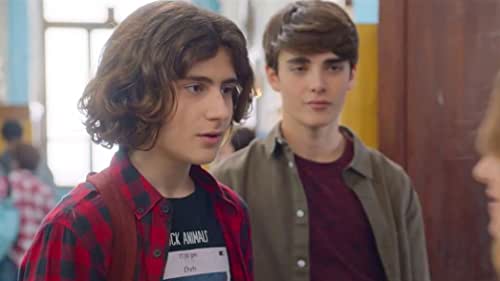 Various members of the D2 (7th grade) class talk to the audience via voice overs and directly to the camera. First, we hear from Pietro Maggi (Andrea Arru), whose parents are constantly arguing. He gets roped into voting for the cutest girl in D2 by his best buddy Giulio Paccagnini (Liam Nicolosi). In homeroom, the boys are tallying the results when Isabel Diop (Sofia Nicolini) gets a hold of it. Somehow, Livia Mancini (Flavia Leone), whom Pietro snarkily labels “Miss Perfect”, wins, even over self-proclaimed beauty queen Arianna Rinaldi (Francesca La Cava).

Of course, Pietro has a crush on Livia, and despite dating D3 bully Matteo (Alessandro Laffi), it seems that the crush might be mutual. But in the second half of the episode, the perspective switches to Livia, who is tired of being perfect all the time; she takes pleasure in helping with Isa’s scheme to get back at the guys for ranking the girls, especially when they gave her bestie, Monica (Federica Franzellitti) a designation of “NOT CLASSIFIED.”

She also is tempted to help Pietro tag a school wall, his protest when the school body hears the Galileo Galilei will be closed, with all of them being transferred to the larger school on the other side of the island. The fear, of course, is that all of their friendships and rivalries will disappear as they get integrated into the new school.

DI4RIES is not one of those shows that’s going to show teens drinking, taking E and partying at some rich kid’s house. It’s definitely more about middle schoolers doing middle school things. It’s certainly a show that’s geared towards that age group, and while it’s not milk-and-cookies wholesome, it certainly comes close.

Is that a bad thing? Not if the characters that are on the show become people you want to follow and see how they react to all of those coming-of-age moments you experienced as a kid (or in our case, wish we experienced). Writers Mariano Di Nardo, Simona Ercolani, and Angelo Pastor have certainly done a good job of creating such characters during the show’s first hour (episodes 2-15 of the first season are more like 25 minutes each), and once you understand just how they’re telling these kids’ stories, it’s easier to settle in and root for these characters.

We have to admit that during the half hour where Pietro was the focus, we were doubtful. Pietro and his friends seemed like good-natured kids who got into typical middle school mischief, but there wasn’t anything about them beyond surface sketches. But as some of the stakes rose — Pietro challenges Matteo to a D2 vs. D3 basketball game, Isa’s revenge against the guys ranking the girls — it was easier to get invested in these kids’ stories.

We also started realizing just what the format of the show was when the perspective switched from Pietro to Livia, mainly because it seemed that Livia was a bit more of a dynamic character than Pietro was, and it was helpful to know that we weren’t just going to hear Pietro’s story for the entire 15 episodes. In the second episode, the narrator is Isa, who is seeking her first kiss and wants to get it from the shy Daniele Parisi (Biagio Venditti). While we aren’t huge fans of the narration and the breaking of the fourth wall, we are OK with it as long as the narrator changes from episode to episode.