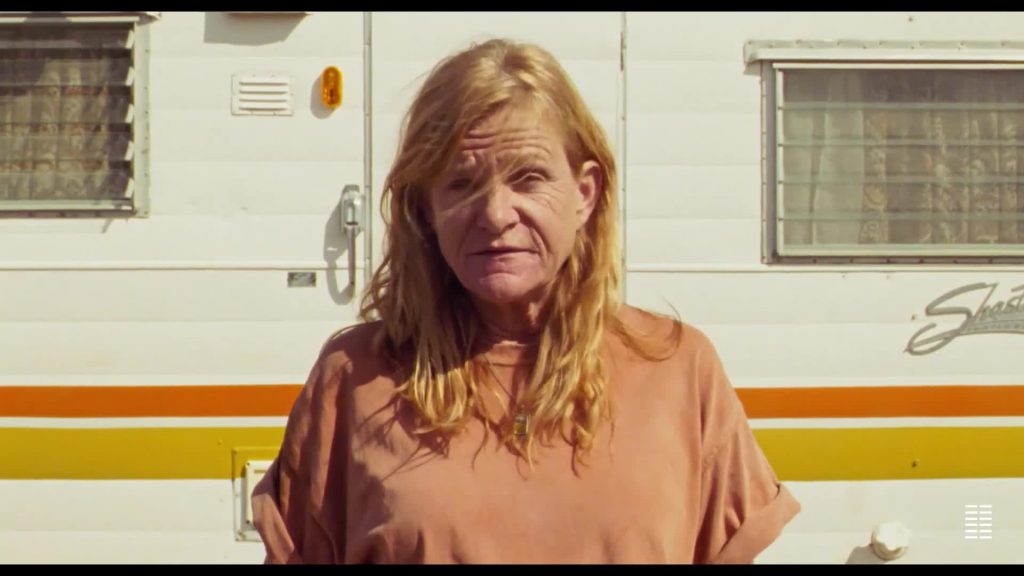 There’s a bait-and-switch scene in Max Walker-Silverman’s feature directorial debut, “A Love Song,” a picturesque but emotionally inert film that teases more depth than the script can provide. Faye (Dale Dickey), an older woman of few words with a camper parked by a tranquil stream, is having dinner with a vacationing Black lesbian couple. A widow of seven years, Faye has been waiting in the vast Coloradan landscape for the arrival of a man she hasn’t seen in four decades. As she describes him to these two women, her gruff exterior gives way to giddiness, and for a split second, Walker-Silverman invites the viewer into a tender, romantic Western that might move against conventions.

His picture’s initial, promising premise will no doubt remind some of Chloé Zhao’s “Nomadland.” It’s the kind of search for autumnal love you want to wrap your arms around. And the type of chewable script ready made for two adept, veteran actors like Dickey and Wes Studi. But Silverman’s “A Love Song,” a slight, brisk, all too thin film, is far more evasive than Zhao’s devastating drama, and far less satisfying too.

It’s a work mostly depending on Dickey to carry the day. For the first third of the film, Faye, outlined by cinematographer Alfonso Herrera Salcedo’s vividly verdant landscapes, holds the bulk of our attention as she moves through her daily routine of fishing for lobster, boiling the crustaceans, and then eating a waterside dinner for one as she listens to her transistor radio. How long she’s been here isn’t altogether clear. And for a time, with an unhurried pace, “A Love Song” finds pleasure in Faye merely existing in this pastoral but purgatorial liminal point.

Walker-Silverman, in fact, sprinkles hints of magical realism: Characters appear out of nowhere, causing Dickey to fluff her hair in anticipation of his arrival, and her radio always plays the exact right song, often a forlorn country ballad, at the exact right time. But these plot devices offer few payoffs. The rural siblings, who wish to dig underneath her trailer so they might move their deceased father to a different resting place, exist to make Faye stay. Conversely, the Black lesbian couple are an all-too-obvious period to the end of Faye’s journey. Somewhere between fairy dust and salt of the earth, these characters become mirages without a semblance of real, human emotion.

Under Dickey’s weary visage, however, these modest components hold together for the arrival of Studi as Lito, a widower and childhood sweetheart of Faye’s. The two characters seem to hail from a different time. Dickey’s trailer, furnished with a vintage interior, painted in shades of harvest gold, recalls the 1970s. The radio appears only slightly newer. Neither Faye nor Lito seem to have cell phones. They initially corresponded by letter.

The narrative’s focal point takes place in a single day: Faye and Lito reminisce, sharing childhood memories, they swim together, and try to find shelter in each other from their respective loneliness, making small talk. Both Dickey and Studi shoulder the lesser material through a charming naturalism that papers over the script’s artificiality.

On a basic level, the set-up of these tender characters by Walker-Silverman makes little emotional sense. Faye tells people that after 40 years she barely remembers Lito’s face. But the idea of two people keeping in close enough contact for one to have the address of the other, while knowing little else about that person, other than their spouse is dead, feels far-fetched.

Certainly Faye only sees Lito at a surface level, as a path away from isolation. And in a world where few of your friends are still alive, when the connections to your past moves further and further into the forgotten, pining for romance in an old flame, even if your spark was more like a nostalgic ember than a passionate wildfire, offers a valid entry point. Especially since the edification of a bygone way of life serves as the bread and butter of the Western genre. The problem arises from Walker-Silverman seeing these characters at a surface level, too.

As written, Faye and Lito barely rise above being ciphers for grief. They require Studi, and especially Dickey, to find a depth that, in the hands of lesser actors, would be undiscoverable. What does it mean for a single widow to live self-sufficiently underneath the stars? How does it feel for a Black lesbian couple to roam the West? None of the narrative bows, even when tied, feel earned. “A Love Song” concerns two people learning to love again, a sweet, life-affirming topic. It’s the “how” that’s lacking.