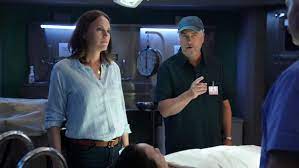 One of the 21st century’s most venerable franchises is back. “CSI,” which in its first run lasted 15 seasons and generated three spinoffs, returns as “CSI: Vegas,” reuniting William Petersen and Jorja Fox. The two actors, key players on the original series, are now old-timers, providing insight about science’s potential to solve crimes from the sidelines. We’re informed in passing that original series lead Marg Helgenberger’s character has retired.

Even without certain parts of old-school “CSI,” franchise fans are in good hands. The show is now led by Paula Newsome, a naturally empathetic performer (known for HBO’s “Barry”) and staffed across the board by a significantly more inclusive ensemble. Mel Rodriguez, a gifted comic actor, is especially welcome as a medical examiner — the role in which shows like this find room for oddballs. Petersen and Fox as Gil Grissom and Sara Sidle, as well as appearances by Wallace Langham and Paul Guilfoyle, have a torch-passing feeling, setting up a new lab’s worth of characters. The show stakes its claim on audience attention early, with a violent attack on a returning character and, throughout, attempts to balance a classic dynamic with a new energy.

That balance largely works. The Gil-Sara relationship, reintroduced in the pilot, remains crisp; the actors are pros, and the fundamentals — Gil’s reflexive trust in science versus Sara’s more intuitive approach — provide an elegant backstop for the new stars. If in the first few episodes not every cast member pops, it might be due to the volume of incident that’s thrown out to hook fans. There’s an ante-upping quality to the gruesomeness, as if to reassert “CSI’s” paramount willingness to Go There. When, early on, it’s revealed that a head was removed from a woman’s body only after she was preserved in quicklime — that’s when viewers are likely to feel that “CSI” is truly back.

That’s for better and worse. The show, whose electrifying qualities led it to become, for a period, broadcast TV’s most popular program, can have a certain deadening quality over time: Its extremity, and the flashiness of the camerawork, can feel overstated, though they do, at least, suit a city setting that “CSI: Vegas” leverages nicely. And attempts to tie storylines to current issues (like male rage toward women in tech) can be well-intended but ineffectively executed.

But these are quibbles with a series that works, in a landscape of procedurals that are significantly less compelling. “CSI: Vegas” is solidly built, and watching it brings to mind an era of TV, not so very long ago, when shows like this were thick on the ground.

Perhaps the networks’ next act can be building new programs like “CSI” — or, at least, bringing to the fore the elements of this “CSI” that are most refreshing and new.