Venom: Let There Be Carnage 2021 Movie Review
Skip to content 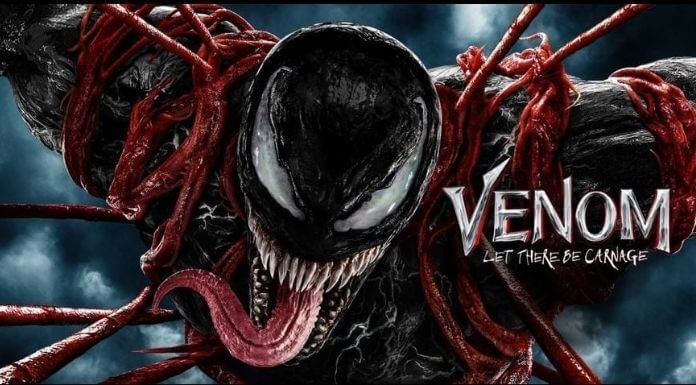 The Animation: I’ll give them props on their design for making the symbiotes come to life, Sony’s latest dive into Venom’s creation is very good. Tight forms, great fluidity of the black ooze that makes him up, and those sensational teeth are perfect for bringing him to life. The movement is fluid, it goes super well during the movement pieces, and the tendrils acting out the comedy moments are awesome. When Carnage appears, that chaotic redness is not quite a vivid as the comics, but definitely has the blood element and chaos of the malicious symbiote. It’s grimy and viscous, and has the sinew of the tendrils that offers a little more of the nightmare that Carnage is known for, including his devilish bladed arms.

The Music: I know a soundtrack for a Marvel movie is not the most noticeable feature, but much like the first film it’s got attitude, beats, and some layers to it. Some symphony work goes alongside the fanfare sound effects to help make the inspiring pieces we love in super hero movies. It’s the rap times though that really work and man are they awesome. Rap beats carry the harder attitude of the Venom world, with that no consequences edge that works to go with Venom’s attitude. The end trailer song was my particular favorite and I liked given the sweet tones of the chorus and the verses bringing the hardcore beats.

The Acting: Certainly not the Oscar’s level others have hit, but I enjoyed the performances of the cast on this installment of Venom’s chronicles. Tom Hardy essentially acting with himself is certainly the highlight, with a natural flow to the chaos of the lines that he seemed to write for himself. Hardy as Eddie has the same nervous, loser attitude he conveyed in the first, that awkward atmosphere he brings doing super well to act as the moral compass to guide the ever aggressive Venom through the world. As Venom, he’s hilarious, still acting like a newborn/toddler who can’t take no for an answer and wants to eat everything he can for his survival. I loved the lines he delivered as Venom, I loved the joy, horror, and vulnerability he brought, and the commentary is certainly one for the books for voice acting. Harrelson still does his job well as the insane serial killer of Cletus, especially that eerie, unsettling longing that he seems to have with his darker roles. While not the most insane of a serial killer, he works well enough for the direction they took him, and they sort of corrected the hair for me so that’s a win. I can’t say he was my favorite villain character, so there really is not much I can say outside of a solid delivery for his backstory and that longing of something serial killer roles thrive on. Michelle Williams wins for a fun support, but again she is not utilized the best in this film and could have had more involvement on so many levels for me. The times she was on board, she was funny, a good nonverbal and verbal acting mixing to bring some of the more unique comedy moments I’ve seen in Marvel in some time.

The Comedy: Hands down the best part of the movie is the comedy and it is funny. Like the last installment, that dynamic relationship between Venom and Eddie is solid, a duo who play so well off of each other despite being the same voice. The aggressive personality bossing around the meeker personality goes super well, and Venom’s mannerisms and taunts are a wonderful comedic tool. Then, they start using the internal monologue even better with Venom, showing that combative mindset distracting Eddie from answering normally, especially when Venom pushed enough to cause Eddie to outburst. Finally, when you see Venom get the driver seat a little bit, the writing works well with Venom exploring the universe a little more. His speeches, his jokes, and so much work with this new angle to Venom and again I was cracking up at the vaudeville humor he brought, alongside the commentary of the movie. And as I said, Michelle Williams does well in her roles, sometimes acting as a prop and other times a fantastic medium that blends all the styles together. There are a few things that Harrelson does that are funny, but they are in the backburner for me and lost to Venom’s constant banter.

The Mid Credits Scene: Hands down the most exciting part, Venom’s extra scene shows great promise for the series in so many ways. It’s still got great comedy and chemistry you have been seeing for most of the film, but does not just act as the comedic finish Marvel likes to do. No there is some story behind it and then a nice surprise to set up the future of our dark symbiote. I won’t say more to avoid spoilers, but Serkis and company get props for this one.

Dislikes: The Plot: My friend may have liked it, but for others like me, the plot is again a rushed mess that does not utilize the characters well. The focus on the comedy allows for development of Venom and Eddie’s relationship, and though not massive improvements or anything revolutionary, it works well for the buddy comedy approach. Yet, where it really went wrong involved everything else in their lives when I was watching this film. Where Anne was a key factor in the first film, became more of a side piece in this, with her plot elements opening up some comedic factor, but little else past this. The whole Eddie moving on with life and trying to adapt to the new stakes, was kind of rushed and lame, even to the point of conflict that happens in this film. The story with Cletus was… okay, and a driving factor for the decisions of how to get to Venom, but I can’t say it fit with the story I had envisioned for the psychotic serial killer I know Cletus to be. And for Shriek’s inclusion, held promise, but as she was not a symbiote, so she was not too ingrained into the full story. Venom’s second installment does not have the same cohesiveness that other Marvel film’s do and it’s a shame again due to what they could have executed.

Carnage feels a bit too controlled: If I remember several comics and cartoon shows correctly, Carnage was a force that was chaotic, deadly, and insane, hence why he was able to be such a dark and threatening force. In this movie though, I don’t think his utilization matched that and in fact made him a little too logical. Certainly there are moments where that primal force of hunger and death seeking are seen, but I can’t say I was impressed with the other ways they took the symbiote and his host. There was no impending terror of them hunting, no close calls and horrific sequences that haunt your dreams. As for his other powers, I guess I expected more based on what the trailers showed off, but that did not happen for me. The blades were more design than used and even the projectiles were minimized, which with Carnage minimal is not way they usually go. Carnage is one of those villains whose execution requires a lot of study and detail and the direction I took only somewhat filled that craving.

The Action: Or better yet lack of it. Venom’s second film is still heavily comedy based and seems afraid to embrace the action that a dark tale could really execute. Looking at the movie as a whole, there was about fifteen minutes total that we saw of this film and that’s sad when comparing to so much of the other Marvel films. Most of the scuffles are one sided displays of CGI slamming that really offers no suspense or horror, so I can’t say it was that exciting for me. Then the climactic ending, was kind of bland for me, again given what I’ve seen in the other Marvel movies. A ten minute bout of a few punches and slams that, while appropriate as a start, did not use the powers that we as fans know these monster have. Where was the dance of crimson blades a crazy, scarlet symbiote could unleash? Where was Venom’s strength utilizing the environment to combat those blades and use tricks to offset the strength of Carnage? Where was Carnage’s mutations evolving out and further surprising us? The answer is not on the final cut, though I did enjoy the clever use of sound bringing more of the hosts out. The final ordeal is anticlimactic for me, and did not live up to the potential that these two titans are known to bring, and could have used about 15 more minutes at least or at a few other conflicts to break it up.

The VERDICT: Venom 2 was okay with me, but it’s not the best comic book based movie to come out of the woodwork. Certainly the visuals and attitude of the movie are there and the acting brings that world to life and does well with the established dynamics. It’s biggest strengths for me were again the comedy and the mid credits scene, the former being the biggest selling point for fun for this film. Yet, the movie’s plot is still a mess and the handling of Carnage, while not the worst, there was a lot of potential they missed out on in his use. Look wise he’s great, but the Carnage I know and the Carnage I got, did not match for what I had hoped to see. In addition, the action was very limited and did not really satisfy the buildup they were trying to make. As such, the movie is okay, and fortunately has enough special effects and music to get a trip to the theater for a see. My scores for this film are: