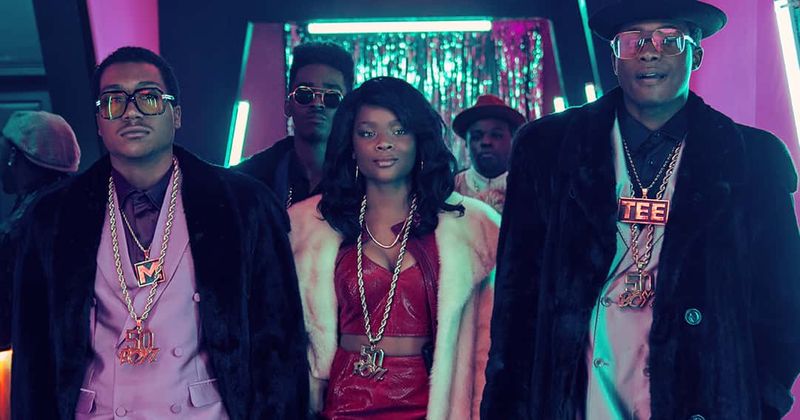 The first episode of “BMF,” Randy Huggins’ new Starz drama, sets the stage to tell the larger-than-life story of the Flenory brothers, who emerged as major players in the Detroit drug underground throughout the 1990s. Within just a few introductory scenes, “BMF” shows us Terry and Demetrius (aka “Meech”) in three different time periods as children, young adults and seasoned veterans. With a heavy dose of self-serious voiceover from adult Meech, the script lays bare the brothers’ hopes, dreams, inner conflicts and stubborn refusal to compromise. As with anything remotely biographical, it does its best to introduce its subjects in a way that makes them relatable, compelling and epic all at once. Every time the pilot comes close to achieving that balance, though, it quickly loses focus and gives in to enough clichés that it’s easy to forget that the show is, in the words of the opening title card, at least “loosely based on truth.”

Throughout the first four episodes of the season’s eight in total, “BMF” defaults to distracting “vintage” filters and scattershot storytelling that often threaten to flatten the setting and characters that might otherwise make it unique. The series is ostensibly about how Terry (played in the middle timeline by Da’Vinchi) and Meech (Demetrius Flenory Jr.) became such seemingly unstoppable forces in Detroit, but the series almost entirely skips over the crucial earlier moments of their teens that led them there. Instead, it goes from showing them as wide-eyed kids (played by Jaylon and Johnnie Gordon) wishing their family could have any disposable income to them already being established players on the Detroit streets as older teens. Sporadic voiceover from an older Meech (Jon Chaffin) pops in every now and then to explain some basics of their lives and/or the history of Detroit in general. The few women in their lives — including their concerned mother (Michole Briana White) and Terry’s girlfriend (Sydney White) — express their misgivings, their strict father (Russell Hornsby) registers his disapproval, Terry and Meech ignore all of the above, rinse, repeat.

If there are any moments that stick out from Terry and Meech clawing their way to the top, they come thanks to the committed performance from Flenory Jr. — who, yes, is the son of the man he’s now portraying onscreen. Knowing that detail about “BMF” immediately gives it an extra frisson of intrigue, as Huggins and producer Curtis “50 Cent” Jackson undoubtedly knew when they cast him. That Flenory Jr. rises so well to the occasion speaks to his willingness to portray his father’s past without flinching from its rougher edges.

Still, it’s telling that the most immediately interesting aspects of “BMF” don’t directly belong to either Terry or Meech, even though they’re ostensibly the show’s twin anchors. Instead, the most compelling characters exist in parallel to their stories instead of at the heart of them. Kato (Ajiona Alexus), a Southern girl working to push the brothers’ product on the ground, brings another perspective and avenue of intrigue that should prove interesting to watch bear out. And as Lamar, the brothers’ most fearsome rival now fresh out of prison, Eric Kofi Abrefa gives the show’s most complete and downright interesting performance as a live wire of a man living on the edge between stability and true notoriety.

Given such rich source material, there’s almost too much for “BMF” to tackle, and it shows. But when it’s not too busy trying to work through its biographical bullet points, it can find moments of sharper insight — whether on Terry’s love of the game, Meech’s conflicted sense of duty, or their parents’ frustrated inability to pay their own way from within a stacked system — that deserve more room to breathe.