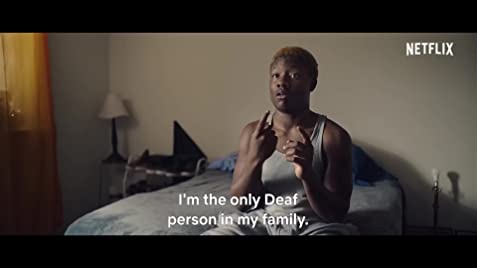 Ten years ago, director Matt Ogens was shooting an ad campaign involving high school football teams. One of them was from Maryland School for the Deaf. Ogens was already aware of the school – he grew up within 30 miles of the place and had had a deaf best friend since he was eight years old – and he stayed in touch in his directorial capacity for the next decade, feeling that “there was a bigger story to tell”.

The result was shot last year, pre-pandemic, and arrives on Netflix in the form of Audible, a 38-minute documentary about the team’s final semester. It starts with the brutal loss of a game that breaks a 16-season winning streak, taking in the ordinary trials and tribulations of adolescence, plus some of the particular challenges of preparing to step out of the deaf community to face adult life in the hearing world. The soundtrack fades in and out, blurring and unblurring to reflect what the players themselves hear of it, and keeps in all the advertent and inadvertent noises the students make as they communicate in American Sign Language (ASL). It is also set against the backdrop of grief for teammate Teddy Webster, lost to suicide. It finishes with the homecoming game, where the team meet with either triumph or disaster – I shall not spoil the ending for you.

It is a lot of ground to cover in under 40 minutes, and there are many points at which you wonder whether Ogens might have been better off waiting another few years in order to make a longer, weightier film that had time to give all aspects of the team’s complicated story their due. At its current length, it skims so lightly over so much that it feels more like an extended commercial than a piece of factual programming – especially given its numerous glossy sequences out on the field, following the games that bookend the show and the training sessions at dusk and dawn, interspersed with moody pre- and post-match locker-room moments, and jazzily shot pep talks. Such elements are pleasant enough, but unspecific and unworthy of the amount of time they take up.

However, viewed as a small-scale, aurally immersive introduction to a world largely unknown to the general public , it works beautifully. The nuanced physicality of ASL – generally flattened into mere hand gestures when we see it in film and television dramas – is conveyed, evoking much more strongly and accurately than usual the sense of deaf culture as one that stands alongside any other, rather than as the subsection of the “disabled community” it is often thought to be. (Please let us reconvene to discuss the term “disabled community” at a later date. A mere TV review cannot, alas, parse everything as fully as I would like.)

Audible centres largely around one player, Amaree McKenstry-Hall, who lost his hearing as a toddler after contracting meningitis. “I can’t hear anything,” he explains to camera in his bedroom. “Cheering, fans yelling … I feel their vibrations. I feel their footsteps when they run – the boom, boom, boom.” He is the only deaf member of his family, and has a cochlear implant that he only uses to listen to music, though he doesn’t hear the lyrics. His father left the family at the same time as Amaree lost his hearing. His father says now that he was terrified. “I walked out … immaturely, very foolishly, and later regretted it.” Now he has found God, and is working hard to rebuild his relationship with Amaree. The scenes where they cultivate the tender new shoots of affection between them are some of the most touching in the film.

You do long, however, to hear more about what life is like growing up in a family not fluent in your language, and to have some wider context regarding the impact of deprivation on individuals and families already not competing on – if you’ll pardon the pun – a level playing field. The film could also have more closely considered the heightened meaning sport has for deaf students. Above all, you wish for more time to have been spent on the causes and effects (especially on his boyfriend, Jalen, who gets a sparse few scenes) of Teddy’s suicide.

Ogens has said that he hopes the film will be a springboard to bigger things, and by the end of this rather slight but moving and evocative film, you can only hope that it will be so. I look forward to it.