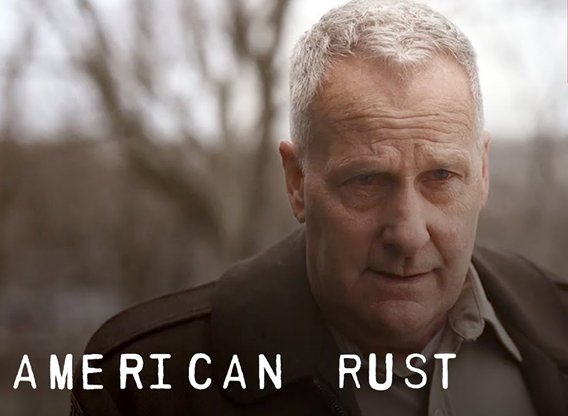 “American Rust” is set on the opposite end of Pennsylvania from Easttown, where Mare solved crimes earlier this year. On that great HBO series, the town seemed to pulse with life and emotion — look past the chewy accents and Wawa sandwiches, and a sense of Easttown emerged through the slump of characters’ shoulders, the way they engaged with one another. On “American Rust,” though, the title’s rather direct nod to its Rust Belt setting gives the first clue that subtlety is not the order of the day. The plot thrives on contrivance and misunderstanding more often than human emotion, and attempts to draw out what it’s like for characters to live where they do more often seem to end in showy small-town cliché.

As police chief Del Harris, Jeff Daniels puts to use a now-familiar skillset. Harris is a portrait of conflicted modern masculinity, and Daniels suffuses him with weariness and frustration at those around him. In the wake of a murder, Harris decides to protect the son (Alex Neustaedter) of his sort-of girlfriend (Maura Tierney), a compromise he takes on with a familiar beleaguered air.

Daniels has, in recent years, had a second career of sorts playing variations on Will McAvoy. His character on HBO’s “The Newsroom,” which aired from 2012 to 2014, existed in a perpetual state of puffed-up indignation over American decline. His every utterance was an appeal to higher virtues that, thanks to the character’s superior air, ended up not feeling very appealing at all. His being contracted to play James Comey in Showtime’s “The Comey Rule” came as little surprise, relying as it did on Daniels’ facility with aggrievement at moral lessers in service of a higher truth. Daniels’ recent characters have a certainty that they’re doing the right thing, carried across with an irritating, and irritated, impatience that every other character isn’t on board.

And his Harris is grouchier and glummer even than Daniels tends to be, if every bit as reliant on snarky comebacks to those the character holds in contempt. But in the absence of compelling texture or grain about the environment around him, Harris and his dilemma take over a show that seems to want to be about the grand sweep of recent American history. Tierney, able as ever, plays a part in a storyline about workplace unionization that is well-intentioned and that is made to feel entirely tangential to the main action of the show, while Neustaedter is playing an idea about wayward young people. Bill Camp shows up, too, playing a character whose abject misery lacks, in the first three episodes, shading or dimension. But the show tends to lean on unhappiness as a goal in itself, and no one here is unhappier than Harris.

The series, based on a novel by Philipp Meyer, is made with real concern for working people, and shot with evident effort; it looks, if not great, than like a compelling evocation of its small town. But there’s something about “American Rust” that tends to feel almost fetishistic of Rust Belters, so focused on crisis over character that it’s as if the only thing that matters about these people is that they struggle. In its early episodes, “American Rust” cannot conjure a sense of place, for all the effort that went into making it look right, because it has too little sense of who lives there.