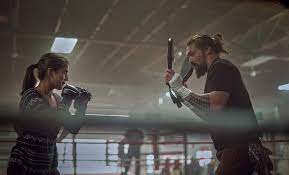 In the opening scene of his new thriller premiering on Netflix, Jason Momoa dives off the top of a baseball stadium into a river far below. No, he’s not playing Aquaman but rather Ray Cooper, an ordinary blue-collar guy. Or at least the sort of blue-collar guy who can kick ass and dispatch trained assassins as if he’s been doing it all his life.

After that prologue, the film misleadingly continues as if it were a sensitive drama, with Ray and his teenage daughter, Rachel (Isabela Merced, Dora and the Lost City of Gold), attending to the hospital bedside of desperately ill wife and mother Amanda (Adria Arjona). Their doctor promises that help is on the way in the form of a miraculous drug that can cure Amanda’s rare cancer. Unfortunately, their hopes are dashed when the pharmaceutical company almost immediately pulls it off the market.

A distraught Ray doesn’t exactly hide his feelings when he calls into a television interview with the company’s smarmy CEO, Simon Keeley (Justin Bartha), and threatens, “If my wife dies, it’s your death sentence.” Not longer after, Amanda does indeed die, and it becomes apparent what kind of revenge thriller Sweet Girl intends to be.

A subsequent clandestine meeting between Ray and an investigative journalist ends badly when the journalist is savagely murdered and Ray engages in a vicious brawl with the killer, suffering a stab wound in the process. His subsequent violent encounter with Keeley results in numerous fatalities, after which Ray and Rachel take it on the lam. They’re pursued by a pair of FBI agents, including the sympathetic Sarah (Lex Scott Davis), who establishes a rapport with Rachel after the concerned girl calls her.

While the relationship between Ray and Rachel, who proves as hard-edged a fighter as her dad, is movingly depicted, Sweet Girl quickly degenerates into a mindless series of ultraviolent hand-to-hand combat sequences. The film’s true stars are the stunt and fight coordinators who render these clashes in visceral, mostly realistic fashion, although they eventually lose impact through their sheer repetitiveness.

Credibility is strained to the breaking point when Ray displays an uncanny ability to outfight the bad guys, including a suave assassin (Manuel Garcia-Rulfo, quietly stealing the film) who can shoot people without even looking at them. It’s strained even more when the diminutive, not exactly imposing Rachel showcases similar abilities, although her untapped aggression is signaled in an early scene in which she loses control during a boxing lesson and nearly kills her male opponent. To her credit, Merced manages to sell her character’s fighting skills to a significant degree, while Momoa is so physically intimidating that you wonder why Ray isn’t a WWE star.

Much harder to sell is the absurd third-act plot twist upending nearly everything we’ve seen before and demonstrating that screenwriters Gregg Hurwitz and Philip Eisner have seen far too many M. Night Shyamalan movies. And Michael Hann’s Heat, for that matter, as evidenced by the scene in which Ray and the assassin call a truce and sit down for a quiet conversation in a diner. Because, of course, that’s what trained killers and their would-be prey would do.

First-time director Brian Andrew Mendoza handles the nonstop action efficiently and makes excellent use of the extensive Pittsburgh locations. The elaborately staged action sequences at Fort Pitt Bridge, PNC Park, on the transit line and in the downtown area, featuring hundreds of extras, demonstrate the city’s eagerness to cooperate with film productions. Toronto, be warned.