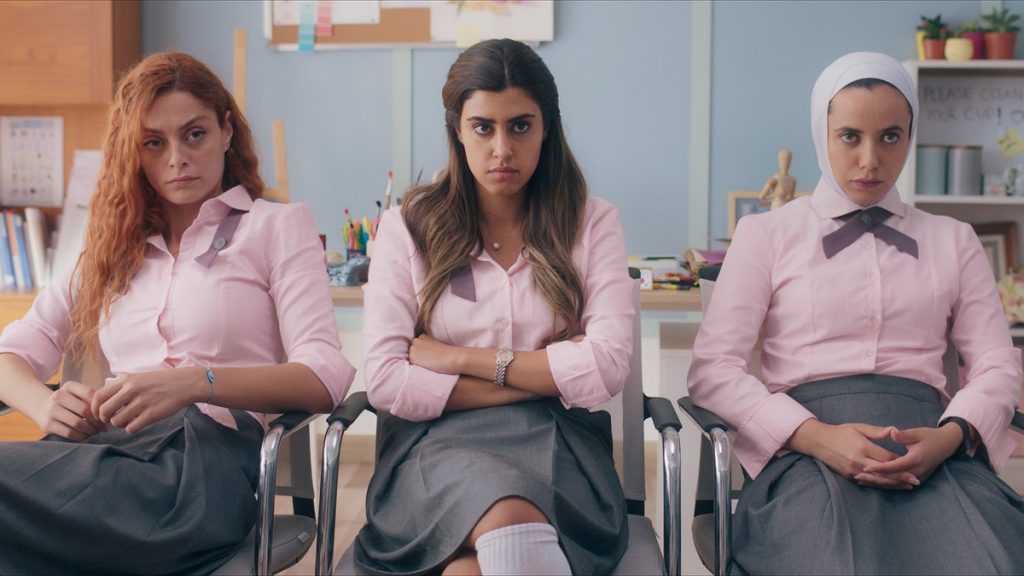 High school sucked for a lot of us, didn’t it? It didn’t take much for it to suck; often it was the presence of one or two people that made your life a living hell day in and day out. Bullying has just gotten worse in the 2020s, where people have the ability to torture their classmates outside school via social media. And if you think this is a phenomenon that’s not universal, think again. A new teen series from Jordan lets viewers around the world know that bullying — and its consequences — is pretty much the same no matter where you go.

We see the feet of a girl in a school uniform walking by the hull of an old bus. “School was always my favorite place,” she says in voice over. “I loved going there… every day.”

As we see flashes of the girl getting attacked, kicked, and ultimately thrown to the ground, where she hits a head on a rock and loses consciousness, she then says that “school is now my nightmare.” As some of her classmates get questioned by police about the incident, one says “I don’t pay attention to her kind,” another jokes that she’s in the middle of “CSI: AlRawabi”. But another girl sobs that the victim was her only friend.”

Cut to two weeks earlier. We see the victim, Mariam (Andria Tayeh), get on the bus headed to her prestigious high school, AlRawabi School For Girls. She sits next to her friend Dina (Yara Mustafa) and is immediately pelted with insults by the girls behind them. That girl is the popular Layan (Noor Taher), who we see talking to her buddy Raina (Joanna Arida) about sneaking off the bus to go on an early date with her new college boyfriend.

After Layan sneaks out, using everyone, including Mariam, as a shield, we see her on her date. This is the first time they’ve seen each other in person, and he wishes things could be more private.

At school, the girls sing the school song about how innovative and intelligent the students are. Then they are inspected; Dina gets dinged for the tea that Layan “accidentally” spilled on her when they were on the bus. They’re introduced to a new student named Noaf (Rakeen Sa’ad), who wears leather and has lots of piercings. She also seems to like to keep to herself. Then we see her sneak back on the bus in the afternoon, saying to Raina she’ll do it again in a couple of days.

When Layan comes back the next day, she and her buddies subject Mariam to another round of bullying, but this time it goes a step farther; when Mariam looks over at Layan, Layan seizes the glance to threaten and push herself against Mariam. Then she turns around and accuses Mariam of groping her breasts, and just about everyone in the locker room thinks that’s what they saw. The only one who saw the whole thing was Noaf.

When Dina tells Mariam what she heard Layan say about ditching again, Mariam decides to tell the headmistress. The headmistress gives Mariam a break, because her wealthy father is a huge school benefactor. Layan, seething, blackmails a janitor to find out just who ratted her out.

When she finds out, she sets Mariam up, and she and her two buddies beat the snot out of her, but flee when Mariam’s head hits a rock and she loses consciousness. Noaf, who found Mariam on the ground, saw everything but won’t speak up. After the interrogation, Layan manipulates everyone into turning against Mariam by relating the story about what happened in the locker room.

AlRawabi School For Girls is a Jordanian series created by Tima Shomali and Shirin Kamal that does a good job of finding a high school story that is more or less universal but still having a good sense of place to remind viewers that things in Jordan may be a bit different than they are in the states or Europe.

We were pleasantly surprised at how well-written the story of the first episode was and how well-developed the main characters are. Layan is a girl of privilege who has no problem flouting the rules and manipulating people to get out of trouble. Her buddy Raina is darkly funny but her other friend, Roqayya (Salsabiela), just wants to punch people in the face. Dina is chatty and loves Zac Efron’s abs.

What’s interesting is that we know a little less about Mariam, even though we see her home life and a room full of posters that celebrate powerful women. She’s become romantically interested in someone who has always been “just a friend”. She’s a good student, has friends, and is feisty enough to try to stand toe to toe with Layan. But Layan just has too many nefarious tools at her disposal, and it feels that Mariam is no match for her. How she plots her revenge on Layan and her buddies should bring out more of her personality.

The wild card here is Noaf. She’s quiet, but it does feel like she’ll eventually land on Mariam’s side, helping to shape the plot against Layan and company. That’s going to be where things really get rolling on this series; how Noaf factors into all this, and how this plot might get executed — or, more likely, go completely sideways.

Like was said, the show still has a sense of place. There are reasons why Layan has to sneak around and ditch school to see her college squeeze; she’d get in deep trouble for even wearing some of the revealing clothes she wears on their date. The school prides itself in discipline and order, as we see with scenes like the girls in morning formation singing the school song.

Since the first episode was so well plotted and acted we’re looking forward to seeing how this revenge scheme pans out, and if the deliciously evil Layan has more tricks up her sleeve, as well.