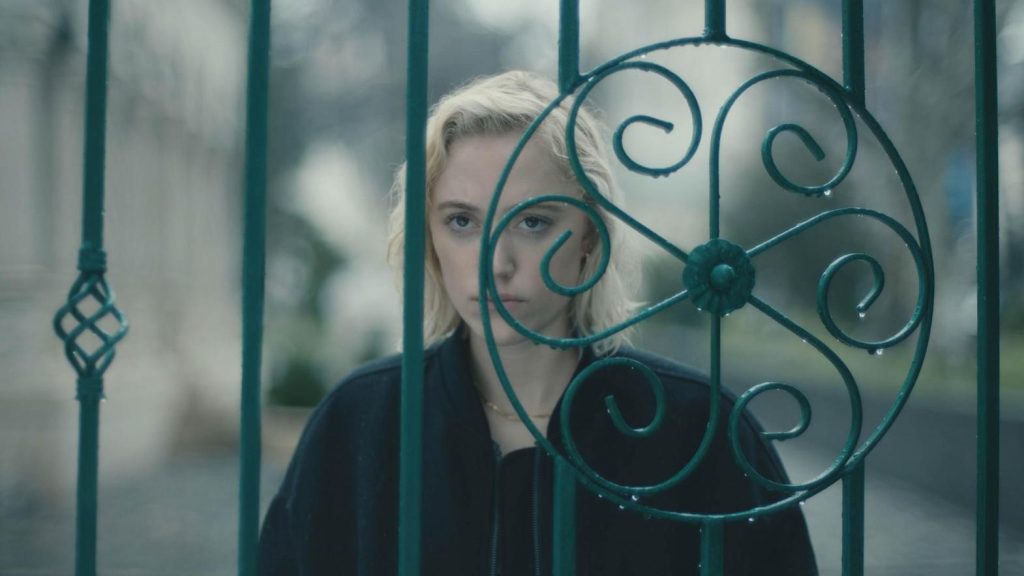 A young woman moves into a new apartment with her fiancé, only to be tormented by the feeling that she is being stalked by an unseen watcher in an adjacent building. There’s perhaps less of a general appreciation than there should be for basic-parts genre films that deliver on their modest ambitions within a tight scope and runtime, as is certainly true of Watcher, the directorial debut of Chloe Okuno (who helmed the entertaining “Storm Drain” segment from last year’s V/H/S/94).

Julia (Maika Monroe) is a former actress who has recently moved to Bucharest, Romania with her husband Francis (Karl Glusman), whose demanding marketing job often leaves Julia to her own devices both day and night.

As she listlessly mopes around their apartment and explores the city, she finds herself increasingly concerned by the perennial presence of a man (Burn Gorman) who appears to be following her. Whether staring at Julia from his adjacent apartment window or seemingly stalking her around the supermarket, Julia fears that she’s being preyed upon by The Spider, a serial killer operating in the area and targeting young women.

A critic could unkindly snipe that Okuno’s film is “sub-Hitchcock,” but honestly, what isn’t? There’s nevertheless a clear love for classically straight-forward suspense cinema dripping from every pore of this effort, perhaps best indicated by a mid-film sequence in which Julia heads to the cinema to watch Stanley Donen’s Charade.

What Okuno does best is capture the confusion and anxiety of living in another country with a loose-at-best grasp of the language. Julia finds herself frequently missing the full context of even rudimentary interactions, typically relying on Francis to translate for her, with Okuno making the smart decision not to subtitle any of the Romanian dialogue, in turn aligning the audience with Julia throughout.

Any disaster scenario is scarier when a language barrier is thrown up, and especially so when there’s a serial killer prowling in the midst. Add to this that Julia is precisely the killer’s “type,” her concerns about her stalker are largely downplayed by the men around her, and she requires her husband to translate and mediate her feelings to the authorities, and a gamy stew is cooked for an effective, if limited, genre exercise.

Watcher was originally written to take place in New York City, but production ultimately moved abroad to Bucharest due to pandemic-related logistical issues. It’s fascinating to know this going into the film, because Julia’s lack of understanding brings so much added dimension and discomfort to her experience, and so the enforced location shift can only be seen as to the film’s fortuitous benefit.

The streets of Bucharest are rendered with a beautiful bleakness by cinematographer Benjamin Kirk Nielsen, whose skillful compositions mine both tight passageways and the halls of Julia’s apartment building for every claustrophobic drop.

Both the encroaching edifices of towering buildings surrounding Julia and that shadowy, veiled face staring at her in her home, convey the voyeurism inherent in metropolitan living; people piled on top of each other, with the surrounding windows providing a literal one into their lives. Nathan Halpern’s musical score meanwhile pays homage to genre classics with his ominous-yet-not-overdone soundscape.

If the “is-she-crazy-or-not” mystery doesn’t deliver much new, and the various suspense sequences are hardly thunderously original – particularly a convoluted trek into an underground strip club – they’re nevertheless brought to unnerving life by both Okuno’s skilful direction and especially Maika Monroe’s performance.

Monroe, who blew up big time in 2014 with the one-two punch of smash hit genre romps The Guest and It Follows, has been a sorely-missed presence on the horror circuit in recent years, so it’s great to see her back in a project so thoroughly hinged on her acting skill.

Monroe’s terrific turn in It Follows proved how captivating she could be playing a young woman fleeing a relentless pursuer, which is put to good use here. One scene cribs from that film near-verbatim, as Julia walks down a street and peers back at a figure who may or may not be following her.

Monroe renders Julia in effortlessly sympathetic terms, while delivering a solid portrait of alienation, her face wearing the crushing weight of yet another woman who simply wants to be believed. Karl Glusman is meanwhile reliably solid as Julia’s believably doubtful husband, and Burn Gorman – who, let’s face it, could play a creep in his sleep at this point – is challenged to make the most of his physicality given that he’s veiled out of focus and hidden in shadows for much of the story.

Though the third act posits a more free-wheeling and interesting turn of plot, ultimately Watcher wraps up on a typical note, though at least has the good sense to abruptly smash to the end credits. It’s certainly harder to bemoan a film’s lack of creativity when it’s speedy about it, and so with its efficient 91-minute runtime, this thriller serves just enough uneasy, fast-moving suspense to satisfy.

Watcher is a mostly standard issue thriller, albeit one elevated by its taut direction, Maika Monroe’s solid lead performance, and its well-placed “believe women” context.