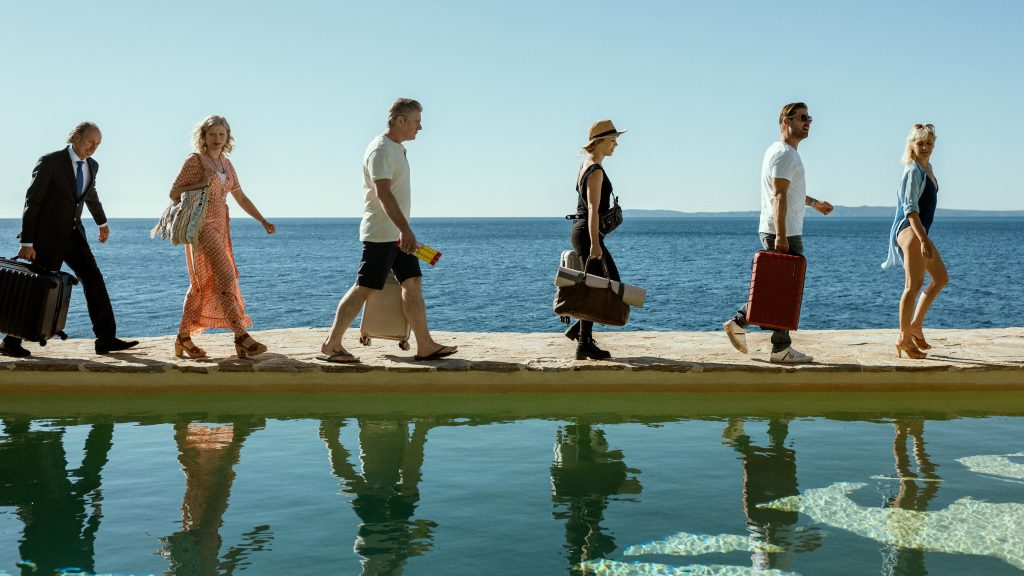 As you can maybe guess from the review’s subject title, this Flemish TV-show (or at least the flashback moments of it) heavily reminded me of the lyrics to Kid Rock’s song “All Summer Long”. The story revolves around 7 childhood friends reuniting at a luxurious and geographically isolated island resort in present times, when they are all around 50 years of age. In parallel, however, there’s also footage of the last summer they spend together, in 1992, and that one didn’t end too well. They were experimenting with lots of alcohol and medication, someone died in a house fire, and the men all participated in an intoxicated gang-rape of one of the girls who passed out.

Just before their reunion, one of the men receives a video recording of the rape and an anonymous message to pay a huge sum of bitcoins to prevent the footage from going viral. The two male “pack leaders” immediately suspect the blackmailer to be someone from within the group, and hope to settle things at the resort, since they are prominent business and political figures nowadays who cannot afford reputational damage.

“Two Summers” is far from great, and not nearly ranking among the better drama/thriller television series that have been produced here over the past 1-2 decades, but at least it’s already a massive improvement over writer/creator Tom Lenaerts’ previous series; – the abysmal “Over Water”. “Two Summers” is clearly heavily influenced by the #MeToo movements and the numerous media tycoon sex scandals that came to the surface during the past years. Belgium has had its share of those as well, and one of them even involved Tom Lenaerts’ life-long friend and TV-associate Bart De Pauw, so likely he found some inspiration here. The handling of the matter remains very clichéd and predictable, however. Rather than showing any remorse for the vile acts they committed 28 years ago, the men involved only seek for ways to keep their dirty little secret covered up, and even when face-to-face confronted with it, they minimalize what the did, seek for circumstantial excuses and victimize themselves rather than the girl. Fundamentally, nothing will ever change I’m afraid.

Purely speaking in terms of television-entertainment, “Two Summers” is a bit short on action, suspense, and surprise elements. The finale is quite predictable and disappointing, especially since I’m sure that better alternatives were possible. Also, it took me nearly four full episodes (and there are only six in total) before I was properly able to link the characters in their early fifties to the same characters in their twenties, as the physical resemblance nearly isn’t there. None of the acting performances are particularly stellar, but the young cast outshine the older cast member – some of which are supposed to be Flanders’ finest (Koen De Bouw, Kevin Janssens, …). Positive elements include the breathtaking island location and an effective recreation of the 1992 atmosphere during the flashbacks.