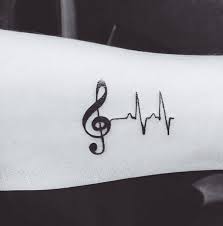 People are getting crazy about tattoos on their bodies and the number of people with tattoos is increasing day by day. Full body tattoos are always in trend. But some people are more inclined towards small tattoos. Small tattoos are extremely popular among both males and females. Small tattoos with deep meaning are very important. Some individuals love to get tattoos on their bodies from head to toe but some people can only get small tattoos because their professions such as banking and teaching do not allow them to get full body tattoos.

By definition a tattoo is a mark, figure, design, or word intentionally fixed or placed on the skin. Both males and females are willing to spend hundreds of dollars to get a tattoo. Tattoos making is a flourishing business. People are earning thousands of dollars from this booming industry. Tattoos are the most convenient way of expressing your feelings towards something and someone. Tattoos are best for introverted people as these tattoos can speak for them because they are too shy to talk to people. But in some societies, tattoos are considered a bad upbringing and they are associated with gang culture.

Getting a tattoo on your body is a huge decision and every tattoo has a story or significance behind it. These stories and deep meaning makes every tattoo beautiful and lovable. Small tattoos with big meanings are a real thing to express feelings. Small tattoos are filled with a small portion of the ink, little pain but a big and deep meaning and these symbolic stories are very significant. Small tattoos are having a big impact in the industry and these tattoos have lots of stories to tell. These stories are hard to tell in words but tattoos can help spread these stories with ease. The ankle is one of the most popular places for a woman to get a tattoo. They can get a small tattoo according to their likings such as a butterfly or a cute puppy. These tattoos can be drawn with something vibrant and colourful but tattoos with simple black colour are more trending.

Small tattoos with deep meaning are attracting more and more people day by day. Not only members of ordinary society but big celebrities from fields like sport, entertainment, Hollywood are getting tattoos. They proudly flaunt their tattoos and they are not feeling shy about these. A tattoo is not just a combination of colours and lines but it is more than that. It shows various aspects of life. Some couples show their love by getting the same tattoos on the same body parts. This shows their unconditional love for each other. This article will shed a light on the feminine tattoos on various body parts. Here is the list of tattoos a woman can ink herself with:

2 Dog tattoo: Dogs are considered man’s best friends because of their loyalty. Their loyalty can not be compared to anyone. Most people treat them like their child or a family member not as a pet. The small dog thigh tattoos for females are important to show their love towards their pet. They can feel motherhood with pets.

3 Couple Tattoo: Couple tattoos are very important for every couple as these tattoos are a way to show their unconditional love towards each other.  tattoos are permanent so it also shows the desire for togetherness. A couple of tattoos is an identical picture of something very significant for the couple. These are small forearm tattoos for females.

4 Sun Tattoo: A sun tattoo represents the truth and light. These tattoos are for people who are kind of religious. It is considered a symbol of peace and truth during a difficult and dark period in various cultures. A small sun neck tattoo female is very good as they show their personality.

5 Moon Tattoo: Amoon tattoo is a symbol of motherhood and fertility that is why these are very common among women. In many important civilizations and societies, the moon is considered a symbol of growth, creativity, and manifestation. It is also related to birth, death, and reincarnation. A small female chest tattoo can be a moon tattoo.

6 Sunflower Tattoo: Sunflower tattoos are very common in ancient greek as it is a symbol of Intelligence, Longevity, and Good Luck. It also represents everlasting and hopeful love in some societies. A small sunflower tattoo on the leg for females is the best option. Sunflower tattoos show growth and fertility.

7 Dragon Tattoo: Dragons are very important in Japanese and Chinese culture and people show their respect towards them with different mediums. A Dragon is the symbol of strength, grace, and intelligence in many civilizations. Dragon small female chest tattoos are a way to show respect to the dragons.

8 Star Wars Tattoo: These types of tattoos are most trending in females. Star Wars is one of the most famous film franchises of all time. A star Wars female side wrist tattoo is a great idea to show the love they have towards the film series.

9 Tree Tattoo:  It can be small ankle tattoos or small neck tattoos for females. These tattoos are for the nature lover especially. The tree tattoo represents resistance, endurance, wisdom, strong family ties, commitment, loyalty, longevity. Females can choose the tree of their choice.

10 Cat Tattoo: Apart from dogs cats are another domesticated animal. People shower their love on them as family members. A cute small wrist tattoo of cats can represent the love of female cat owners towards them. A cat represents happiness and love as cats are the symbol of motherhood and fertility. A tattoo can show the affection of a human being towards something or someone.